The semiconductor titan also raised its financial goals for the rest of the year, thanks to a combination of disciplined spending and strong incoming order flows.

Semiconductor giant Intel (INTC 0.82%) reported third-quarter results after the closing bell on Thursday. The company exceeded its own projections by a wide margin and set optimistic goals for the end of this fiscal year. Here's what you need to know.

Intel's third quarter by the numbers

For the record, Intel's guidance for this quarter pointed to GAAP earnings of $0.72 per share on sales of approximately $15.7 billion.

Beyond the plain numbers

Intel's management provided the following guidance for the last report of fiscal year 2017: 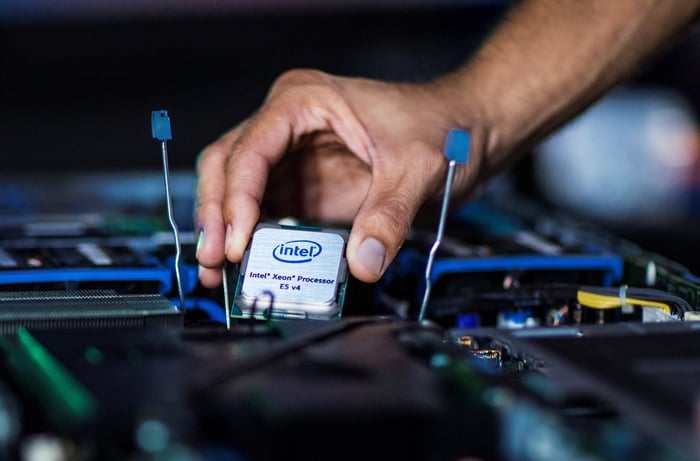 Intel CEO Brian Krzanich highlighted strong execution across the board, leading the company toward record financial results in 2017, as a whole. Beyond that, the beefy research and development (R&D) budgets are paying dividends. "Intel's product line-up is the strongest it has ever been with more innovation on the way for artificial intelligence, autonomous driving and more," said Krzanich in a prepared statement.

This quarter's growth was built on a varied melange of business opportunities. The heady growth of nonvolatile memory sales rested on innovations such as 64-layer 3D NAND memory chips and the high-speed Optane product line. The larger data-center division is exploiting healthy orders from cloud-computing vendors, and the behemoth client-computing group lets notebook processor sales make up for falling desktop product volumes.

Intel published a three-year operating plan at the end of 2016. The company is tracking ahead of its stated goals, three quarterly reports into that plan.

The recent Mobileye acquisition also positions Intel to explore the autonomous-driving market in its formative years, forming partnerships with several top-tier carmakers along the way. Mobileye's results are currently baked into the "all other" operating segment, which contributed just $202 million of top-line sales and an operating loss of $947 million in the third quarter, but this is a $15 billion bet on an emerging market.