Please ensure Javascript is enabled for purposes of website accessibility
Log In Help Join The Motley Fool
Free Article Join Over 1 Million Premium Members And Get More In-Depth Stock Guidance and Research
By Brian Stoffel - Oct 26, 2017 at 9:54AM

Here's why earnings grew so slowly compared to revenue, and why things look bright in the long run.

While New Oriental Education (EDU -3.26%) got its start in tutoring prospective Chinese college students for English language tests, it has firmly made the transition into tutoring for younger kids. During the most recent quarter, which was reported on Tuesday, it signaled its commitment to this demographic by massively expanding its capacity.

That move caused a significant slowdown in terms of earnings, but long-term investors shouldn't be too worried. Over the long run, I consider it to be a wise move, helping to widen the moat between it and any potential competition in China. 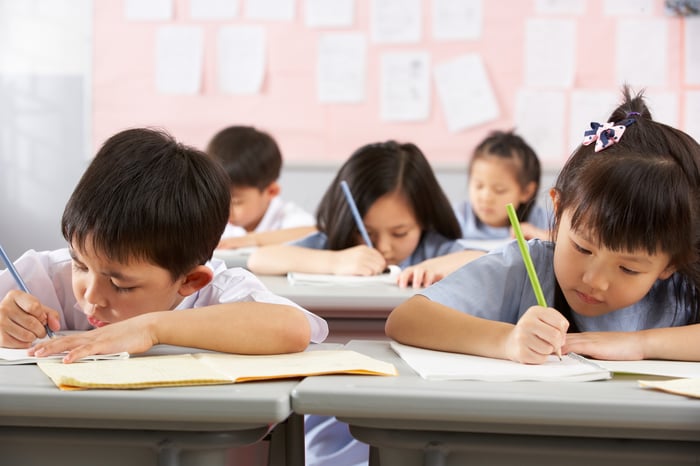 Before digging into the nuts and bolts of the company's most recent quarterly report, let's tackle the headline numbers.

While continued strength in revenue is encouraging, earnings grew at roughly half the pace -- never an encouraging sign for those watching on Wall Street. But if investors take a look under the hood, they'd see that this shouldn't be the beginning of a long-term trend. Instead, it is a move to widen the company's moat and market share.

There were two forces that helped reduce earnings growth during the quarter: a one-off summer promotion to encourage Chinese parents to enroll their children in New Oriental's ecosystem, and a massive expansion of the company's footprint.

We carried out a large-scale summer promotion this quarter by offering low-cost trial courses for multiple subjects in 38 cities mainly targeting students before they start the first secondary school year. Trial course enrollments during the period reached 554,000, more than doubling year-over-year, and student retention rose year-over-year as well.

Obviously, if the summer promotion means giving up revenue in the short term for sticky sales over the long run, that's a trade-off investors should cheer.

With regards to the company's expansion plans, it increased the number of schools and learning centers 17%, from 771 across China last year to 899 today. And these were massive expansions. According to Zhou, "The total square meters of classroom area by end of this quarter increased approximately 31.4% year over year."

While it would be nice if New Oriental could immediately pack the new space with students to capacity, that's simply not what careful expansion efforts look like. Instead, the company got less revenue per student thanks to the summer promotion, and less efficiency from its space thanks to the expansion.

Here's a rundown of other highlights from the quarter:

Perhaps most exciting for investors, management sees revenue reaccelerating during the second quarter. It is expected to come in between $447 million and $461 million. That's equal to growth of 31% to 35%. This means that management believes retention from the summer program will be strong.

Investors fretting about the recent investments should revisit what CFO Stephen Zhihui Yang said in the press release: "Our expansion strategy and the recent incentives should drive additional revenue growth and market share in the long run."