Please ensure Javascript is enabled for purposes of website accessibility
Log In Help Join The Motley Fool
Free Article Join Over 1 Million Premium Members And Get More In-Depth Stock Guidance and Research
By Brian Feroldi - Updated Oct 27, 2017 at 7:27AM

Investors in the Texas-based bank cheer after the company reports another quarter of upbeat results.

San Antonio-based Cullen/Frost Bankers (CFR -0.80%) reported its third-quarter earnings on Thursday, Oct. 27. The regional bank's results showed once again that the majority of its key metrics are heading in the right direction. Investors responded in kind by sending shares to a fresh all-time high.

Let's take a closer look at the bank's third-quarter results to get a better sense of what happened during the period. 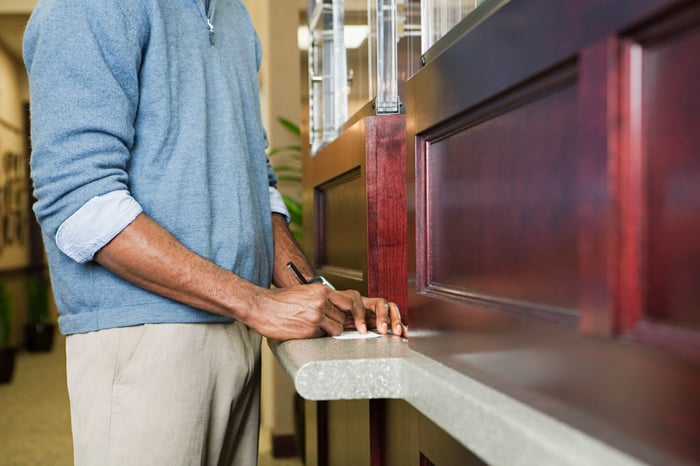 Cullen/Frost CEO Phil Green stated that he was pleased with the company's quarterly performance. He also stated that the bank's deposits remain high, thanks to the company's recent decision to raise money market interest rates.

"Toward the end of the quarter, Hurricane Harvey had a significant impact on the Texas Gulf Coast region. The Houston area in particular suffered an unprecedented level of flooding and damage to both homeowners and businesses. We made it a priority to get our financial centers in the affected areas reopened quickly so that they could resume service, and Frost stands ready to provide our customers in the Houston and Corpus Christi areas with the financial tools they need to recover. For the most part, our customers made it through the storm in fairly good shape."

Investors appeared to be pleased with this report and bid up Frost's shares by more than 1% once trading started for the day. That might not sound like much, but Frost's stock was already trading at an all-time high prior to this earnings release. Thursday's gains seem warranted given the better-than-expected profit results.

In total, Frost Bankers' managed to report another solid quarter and also calmed any lingering worries that the market may have had related to Hurricane Harvey. With loans and deposits on the rise and interest rates poised to increase, investors continue to have reason to feel good about this bank's future.