Please ensure Javascript is enabled for purposes of website accessibility
Log In Help Join The Motley Fool
Free Article Join Over 1 Million Premium Members And Get More In-Depth Stock Guidance and Research
By Keith Speights - Oct 29, 2017 at 8:08AM

But one of them won't stay bright for long.

You only had to look at Merck's (MRK 0.53%) stock movement to know that the big drugmaker's third-quarter results weren't too great. Merck's share price dropped after the company reported a 2% year-over-year revenue decline. Wall Street analysts had expected around $10.55 billion in revenue for the third quarter, but Merck missed that target by over $200 million.

Despite the top-line disappointment, Merck still managed to beat earnings estimates, with adjusted earnings per share of $1.11 versus the consensus analysts' estimate of $1.03. That beat required help from accounting maneuvers, though, primarily from acquisition and divestiture-related costs. But there were three bright spots in Merck's third-quarter results that investors should note. 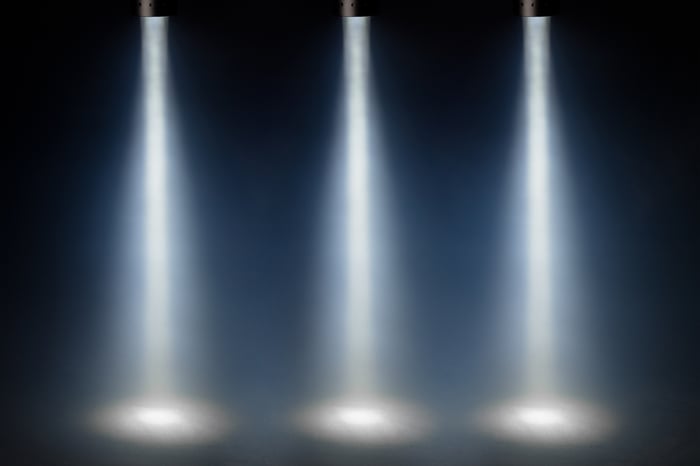 Keytruda continued to enjoy strong momentum in the third quarter. The cancer drug generated revenue of $1.05 billion, an impressive 194% jump over sales in the prior-year period.

A big driver of Keytruda's sales growth stemmed from use of the drug in treating non-small cell lung cancer (NSCLC). Keytruda currently is the only anti-PD-1 drug approved as a first-line treatment for the indication.

New indications also contributed significantly to Keytruda's solid performance. Within a three-month period beginning in March of this year, Merck won FDA approval for four additional indications. The company has launched six new indications for Keytruda in the U.S. in 2017, plus four in Europe, and three in Japan.

Another major source of growth for Merck in the third quarter came from hepatitis C virus (HCV) drug Zepatier. The pharma company reported that Zepatier made $468 million in the quarter, up 185% year over year.

Don't get used to such great growth from Zepatier, though. Merck warned that sales for the drug "will be unfavorably affected by increasing competition and declining patient volumes." That's the stark reality for the global HCV market.

Zepatier's moment in the sun probably won't last long, but at least it has generated solid sales. However, the drug could be Merck's last hurrah in the HCV market. The company announced recently that it was discontinuing development of two mid-stage HCV combos because of "the evolving marketplace and the growing number of treatment options available."

Merck's animal health segment stood out as another big winner in the third quarter. Revenue from the unit totaled $1 billion, a solid 16% increase over the same period in 2016.

This growth came in large part from strong demand for companion animal products and vaccines. The Bravecto line of products that kill fleas and ticks in dogs and cats performed exceptionally well. Merck's acquisition of Brazilian animal health products company Vallee S.A., which closed in March, also contributed to growth in the animal health segment.

Merck CEO Ken Frazier said the company expects its animal health segment to continue growing revenue into 2018 and beyond. When asked on the quarterly conference call how core the segment was to Merck overall, Frazier's response seemed to indicate that there was no interest at this point to consider spinning off or selling the business as some rivals have done in the past and are currently considering.

Headwinds past and present

These three bright spots in the third quarter weren't enough to offset some major headwinds for the company. One of those headwinds, though, should only be a temporary issue. Merck said a cyber attack in June that caused a production shutdown resulted in around $135 million in lost sales. The company expects a negative impact in the fourth quarter as well, but the effects shouldn't carry over too much.

On the other hand, Merck has several headwinds that aren't going away. A rough road ahead for Zepatier in the HCV market is one. Sales for cholesterol drugs Zetia and Vytorin will continue to decline due to loss of exclusivity. Even though diabetes drugs Januvia and Janumet are experiencing volume growth, pricing pressure for the drugs is likely to remain a drag on revenue. There are other negatives as well, particularly some shaky pipeline candidates.

Still, though, Keytruda should keep rocking along. It's projected to become the third-highest-selling cancer drug in the world, with 2022 sales of $9.5 billion. The animal health segment should benefit from several favorable trends, including growing middle classes in developing nations.

Overall, Merck is in decent shape to grow over the long run. That's true even for the shorter term: Merck boosted its full-year 2017 adjusted earnings outlook. It wouldn't hurt, though, for Merck to pick up a few more bright spots to help in future quarters.