Please ensure Javascript is enabled for purposes of website accessibility
Log In Help Join The Motley Fool
Free Article Join Over 1 Million Premium Members And Get More In-Depth Stock Guidance and Research
By Billy Duberstein - Oct 29, 2017 at 7:00AM

Management has data, and it knows what to do with it.

This year, the entire grocery industry has been under pressure due to ongoing price wars, the invasion of foreign discounters, and Amazon's bold acquisition of Whole Foods. Given this industry turmoil, it's always good to know what the largest grocery company in the U.S. is thinking.

On Oct. 11, Kroger (KR -0.47%) held its investor day, including a five-hour presentation on the state of the company and its industry. Kroger's stock is down over 30% in the past 12 months, so it was certainly good to hear management lay out its strategy and vision. Here's what Kroger management wants you to know. 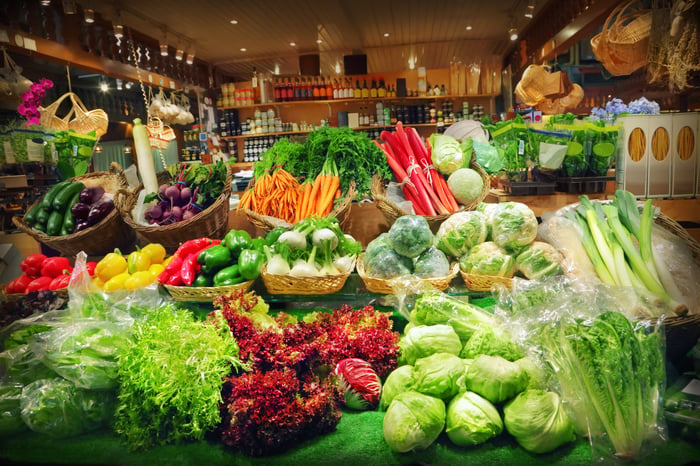 Kroger's numbers, frankly, haven't been so good this year. Identical stores sales, or "IDs", went negative at the end of last year, ending an outstanding streak of 13 straight years of positive IDs every quarter. That change of fortune sent investors running. 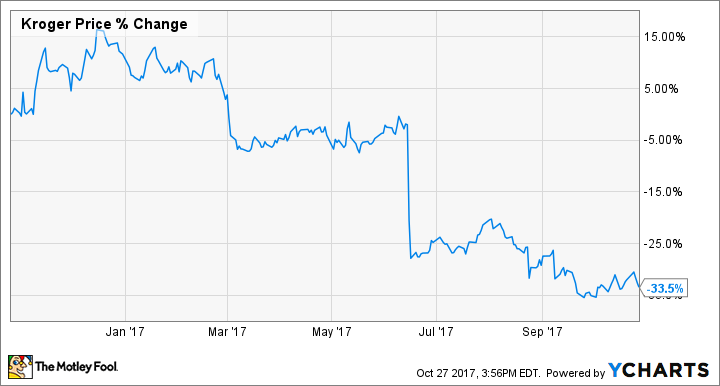 However, while Kroger's aggressive pricing strategy may have hurt headline numbers, it's growing its market share. According to the company, Kroger actually gained share in the three quarters in which it posted negative IDs. Last quarter, the company grew customer households by 1.8%, with an even better 3.6% growth in "loyal" households, which the company measures based on purchase frequency.

And while bears would argue that Kroger's margins could continue to contract, management stressed that it has been able to pass at least some of the recent inflation (or at least change the deflationary trajectory) onto customers, best illustrated in this chart: Management also countered the argument that Kroger will be hard-pressed to grow. It's the largest pure-play grocer in the U.S. with almost 2,800 stores across 35 states. The company had 8.9% market share in 2016, second only to Wal-Mart's 17.3%, according to Statista. When you're already big, skeptics will believe that you can't grow meaningfully going forward.

Management countered that it can not only pick up grocery market share but also be a player in total food service, including restaurants, as well as "non-perishable" categories such as pharmacies, fuel delivery, and general merchandise. If that total market is taken into account, Kroger only has 6% share. Kroger also laid out some of the ways it was going to improve its core business through technology, automation, and big data analytics. As Kroger is the largest grocer in the U.S., it has access to valuable customer data, and the company is in the process of using this data to segment its customer base and personalize its stores, website, and food offerings.

One interesting way the company plans to capitalize on this capability is through a space-optimization initiative, which it has been testing this year and will roll out to 20% to 30% of its stores in 2018. The initiative will allow Kroger to optimize product assortment, store layouts, and personalization at each Kroger store, according to that store's local demographics and competition.

The company is also planning several other initiatives, including scan, bag, & go self-checkout, and an expansion of its mobile order-and pickup offering called Clicklist. To support these priorities, the company is increasing its technology investments by 200% next year. To make room, the company is scaling back its pace of store openings to 65 to 75 over the next three years, down from its previous plan of 300.

Though management forecasts -- especially those looking out three years -- can prove to be inaccurate, Kroger is confident it can still return significant cash to shareholders despite these investments. Over the next three years, the company projects it will generate $6 billion in free cash flow -- $1.5 billion of which it will return as dividends. That's an increase over the $1.3 billion it returned over the previous three years.

Of course, that's if things go smoothly. Just this summer, Kroger scrapped its long-range projections of 8% to 11% earnings-per-share growth amid the challenged industry environment. Still, if you believe management now has a more realistic handle on the space, Kroger offers a compelling story -- assuming, of course, that things go according to plan.