The coal MLP still expects to meet its full-year guidance.

Coal-producing master limited partnership (MLP) Alliance Resource Partners (ARLP 2.20%) encountered "adverse geological conditions" at its Hamilton mine during the third quarter, which caused results to come in below expectations. However, the company partially made up for that issue by selling coal out of its inventory and the mine is now back up to its planned production levels. Because of that, Alliance still expects to meet its full-year guidance. 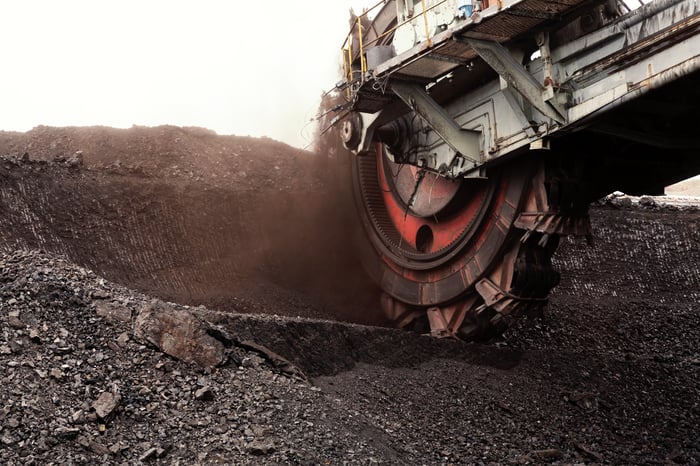 CEO Joseph Craft commented on the quarter by saying that,

Coal sales volume and revenue in the 2017 Quarter came in above expectations, reducing our inventories 1.1 million tons from the Sequential Quarter. ARLP's overall results fell short of our expectations, however, due to adverse geological conditions encountered at the Hamilton mine following a longwall move midway through the quarter. With the Hamilton mine recently returning to planned production levels, our solid year-to-date performance and expectations for a heavy shipping schedule over the balance of the year, we believe ARLP's 2017 annual results will finish in line with our previous guidance ranges.

Alliance's third-quarter results went up against an unfavorable comparable quarter where the company benefited from an uptick in the coal market, enabling it to capture higher prices as it unloaded volumes out of its inventory. That masks the fact that its results improved from last quarter as tons sold rose 13.9% while distributable cash flow was 5.5% higher. Because of that, and the Hamilton mine's recent return to planned production levels, the company remains on pace to hit its guidance targets.

Alliance Resource Partners has pre-sold its entire expected production for this year and continues working on securing additional contracts for future volumes. The company believes that current natural gas prices and coal inventory levels at utilities will lead customers to buy more coal in the near-term. Because of that, the company estimates that it will be able to secure enough commitments to support higher sales and production volumes in 2018.