One of the main benefits of selling consumer staples is that your business tends to improve even during market downturns. That simple fact helps explain why Procter & Gamble (NYSE:PG), the company behind Pampers diapers, Bounty paper towels, and Tide laundry detergent, has one of the longest-running dividend growth streaks on the stock market.

But P&G has been a disappointment to many investors lately. Its stock has underperformed the broader market by a wide margin over the past five years, which led to a proxy challenge that nearly put an activist investor on the board of directors.

Let's look at the key operating trends that left P&G's management open to that challenge.

Sales in the most recent fiscal year were $65 billion, or about 12% below the annual peak they set in 2015. However, that decline is mainly due to foreign currency swings and a massive portfolio transformation initiative that's reduced the number of brands it sells by about 100 down to 66 of the most promising ones. Stripping out those changes shows that growth has been positive but slower in recent years. The good news is this has been the same experience for most of P&G's peers. Rival Kimberly-Clark (NYSE:KMB), for example, has seen its sales growth fall to zero in 2017 from 5% two years ago.

Still, P&G has lost ground in many of its biggest product categories. Its Gillette shaving franchise shed about 5 percentage points of market share since 2014, as part of a broader decline in each of the consumer giant's five core business segments.

Making the most of a tough situation 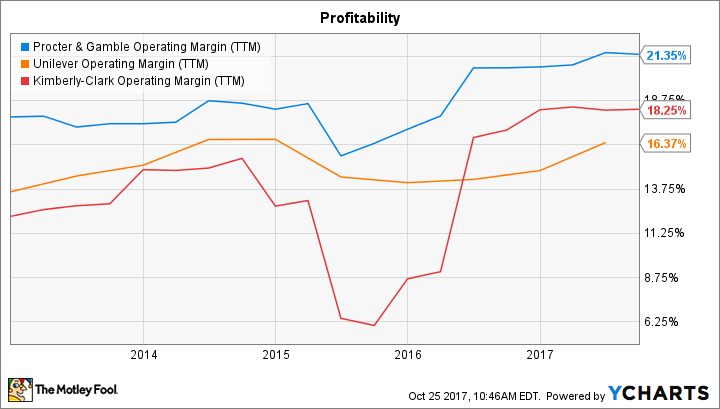 Cost-cutting is a no-brainer strategy during periods of slow growth. That's why Kimberly-Clark and Unilever (NYSE:UL) are both focused on lowering their expense burdens right now.

But P&G has taken an unusually aggressive approach to slashing costs. It has completely reorganized its supply infrastructure, reduced its manufacturing footprint, and sharply curtailed overhead spending on everything from marketing to product packaging. As a result, the company saved about $10 billion since 2013, and management sees room for another $10 billion in cost cuts over the next few years.

Efficiency moves pushed Procter & Gamble's profitability up nearly 3 full percentage points since 2013. Its over 20% operating margin keeps it well ahead of its peers and gives management flexibility to invest more heavily in research and development and in advertising, or to send as extra cash directly to shareholders.

P&G still generates over $10 billion per year in operating earnings, even as sales were dragged lower by foreign currency swings and brand sales. That financial success funded continued steady dividend increases, although the pace of the raises has dropped in recent years. Income investors have no reason to worry that P&G will slice its dividend or pause its annual increases. Sales growth is speeding up a bit, after all, and the company's payout ratio remains a comfortable portion of earnings.

That said, shareholders aren't likely to see market-beating earnings growth until P&G can show that its rebound strategy is finally ending its slow but steady market-share slide. Investors understand that it takes time to turn a $200 billion business around, and so they're giving the company room even as it enters its third fiscal year since beginning its transformation initiative.