Please ensure Javascript is enabled for purposes of website accessibility
Free Article Join Over 1 Million Premium Members And Get More In-Depth Stock Guidance and Research
By Demitri Kalogeropoulos - Oct 31, 2017 at 11:00AM

Confidence is as important in business as it is in your typical sporting competition. That helps explain why Nike ( NKE 0.14% ) stock jumped last week in response to a presentation from the management team that simply outlined its plan to speed up sales and profit growth.

The sports-apparel titan didn't talk just in broad terms about how it would execute its rebound, though. Instead, Nike backed up its bluster with specific predictions that promise stronger sales and improving profitability over the next five years.

Here are a few of the key statements that CEO Mark Marker and his executive team made at their 2017 investor conference.

Getting back to full price

We know [that] if we're doing justice by our brand in service of the consumer, full price will come.
-- Brand President Trevor Edwards

Nike is under no illusion that its past branding and sales successes give it a pass in today's competitive U.S. market. After all, lower customer traffic has forced retailers to cut prices for Nike products just as readily as they have for rivals such as Under Armour ( UA 0.10% ) ( UAA -0.13% ), sending both companies' profitability lower in the process. 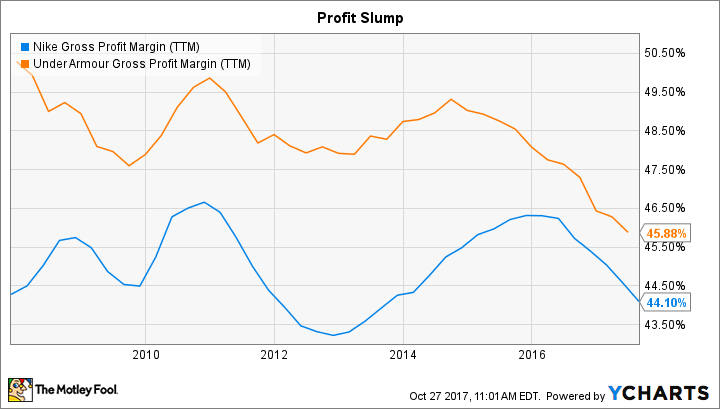 Nike believes its packed pipeline of new product launches will quickly turn things around, though. Executives previewed dozens of improvements that should spark faster demand growth. The VaporMax and Air Max running platforms alone should drive "several billion dollars of incremental growth" in the footwear business, they predicted.

Overall, Nike committed to expanding its gross profit margin over the next five years, as fresh products and increasing digital sales reduce the need for markdowns and promotions.

In a developing market like China, the scale of sport is staggering. Over 400 million people are active at least once a week.
-- Parker

The international division is responsible for just over half of Nike's revenue today, compared with less than 20% for Under Armour, but executives expect that segment to deliver about three-quarters of the market-beating sales growth that they're forecasting over the next few years. Demographics help explain why.

Over 2 billion people will join the middle class in emerging markets between now and 2030, while Nike's U.S. consumer base is roughly steady at about 50 million people. China alone should expand to 10 times that figure over time, the company predicts.

Massive numbers like that give executives confidence to forecast growth in the low to mid-teen range for the China segment between now and 2022, with the Latin American geography growing at a healthy low double-digit rate while the U.S. segment expands by about 3% to 6%.

Sprinting into the future

It's amazing the advancements that are happening in the manufacturing side of our business.
-- Parker

Nike is embracing cutting-edge design and manufacturing technologies such as advanced robotics and digital printing. As an example, management highlighted the shift to digitally printing footwear materials rather than going through the traditional dyeing processes. The change has sped up the design process, increased quality, and reduced waste. But more importantly, it has allowed the company to delay color and print commitments until the last possible moment so that Nike doesn't have to do as much forecasting of demand as it does simply reacting to shifts while producing the exact configuration that a customer is asking for.

Overall, the presentation didn't change the broad growth outlook that Nike executives have expressed since wrapping up their 2017 fiscal year this summer. However, investors now have more detail about the product pipeline that should drive those gains.

Shareholders also have specific predictions -- including rising gross profit margin, high-single-digit sales growth, and return on invested capital of over 30% -- that they can judge the management team against over the next few years.