Baidu beat the top end of its own guidance and analyst estimates as well. So why is the stock falling?

Chinese search giant Baidu, Inc. (BIDU -3.27%) finally seems to be back on the path to growth. The company had struggled with lower revenue and sweeping regulatory changes, as well as several public-relations fiascos, for several years.

In light of its unexpectedly good performance last quarter, investors were looking for more of the same. By all accounts, Baidu delivered, exceeding its own forecasts as well as analysts' expectations, but the stock fell 10% after hours following the company's financial release. Let's look at the numbers and see what has the market concerned. 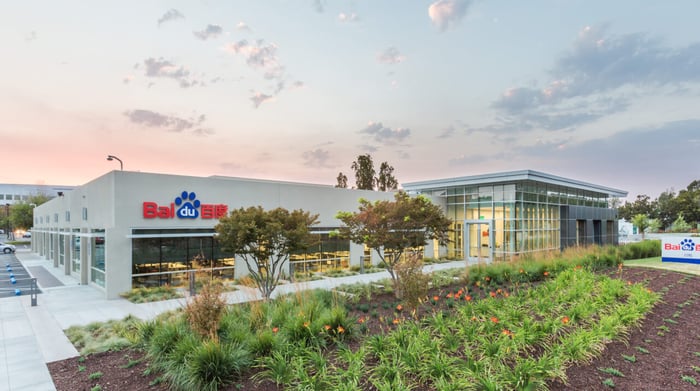 Impressive growth, by any measure

For the just-completed third quarter, Baidu produced revenue of $3.53 billion, up 29% over the prior-year quarter, and topping consensus estimates of $3.47 billion. It also exceeded the high end of Baidu's own forecast of $3.503 billion. Earnings per diluted share of $3.62, or $3.89 on an adjusted basis, blew past analysts' expectations of $2.19 per share.

Mobile revenue grew to 73% of the total, compared with 64% in the same period last year.

Online advertising continues to provide the lion's share of Baidu's revenue, growing to $3.02 billion in the current quarter, up 22% year over year.

Baidu ended the quarter with 486,000 active online marketing customers, a 7% decrease from the corresponding period last year, and a sequential increase of 3.4% over last quarter. Current customers continued to spend more, as revenue per online marketing customer climbed 31% year over year to $6,147. The year-over-year decline is the result of steps the company has taken to improve the quality of its advertisers in the wake of increased regulation in the world's most populous country.

Revenue from the company's other services segment jumped an impressive 91% year over year to $508 million. This includes sales of cloud computing services, its financial-service segment, and subscriptions for iQiyi, its video-streaming service, which is often called the Netflix of China.

Robin Li, Baidu's co-founder, and CEO, stated, "In the third quarter, we made good progress in our strategic pillars to strengthen our mobile foundation and lead in AI [artificial intelligence]. On strengthening our mobile foundation, our strategy to leverage Baidu's leading AI technologies to increase the user scale and user stickiness of Mobile Baidu is showing measurable results."

Baidu has previously told investors that it is moving from a "mobile first" to an "AI first" world, and the company has been increasing spending in the area to achieve those goals. Research and development expenses increased 24% year over year, and much of that increase is related to the company's continued push in the areas of AI and self-driving cars. Baidu has previously stated that it will bring autonomous vehicles to market by 2021.

Spending on content climbed to $563 million, a 4% increase over the prior-year quarter and amounting to 16.6% of total revenue. Baidu continues to invest heavily in content for iQiyi, and reports indicate that the company is seeking to spin off the streaming service, in an IPO as early as 2018, that would value the company at between $8 billion and $10 billion.

These all appear to be solid results, so why is the stock selling off?

Baidu noted during its conference call that during China's 19th Party Congress, advertising had been curtailed to "show our respect" for the proceedings. The company also recently sold its unprofitable food-delivery business, Waimai aka Baidu Delivery, which would have generated an estimated $60 million during the fourth quarter. These two factors weighed on its guidance.

Baidu is making great headway in its turnaround, and the financial results bear that out. The fact that analysts' forecast for the coming quarter doesn't match Baidu's should be much less of a concern than its continued operational execution.