The leader in Mexican fast food is playing an outsize role in Yum! Brands' success.

Taco Bell has become the bellwether for Yum! Brands (YUM -0.43%), and there are signs it might help the restaurant operator post an earnings surprise yet again when it reports on Thursday.

Even though the Mexican-food chain is the smallest of Yum! Brands' restaurants in terms of number of locations, with only about of third of those for Pizza Hut and KFC, it generates the second-largest amount of revenues and the second-highest operating margins. It's also the only Yum! chain reporting sales growth so far this year. 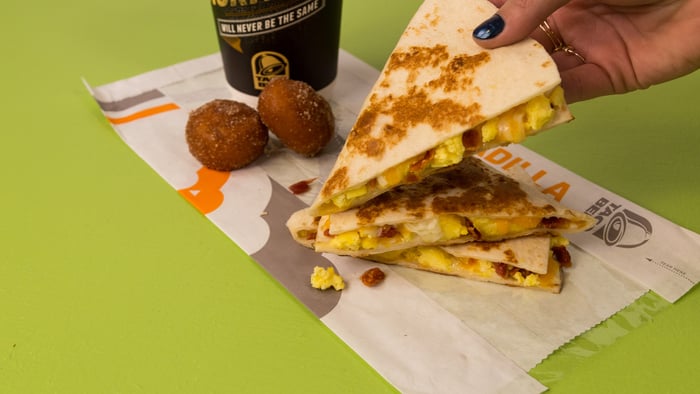 Love for the chalupa

The KFC chain may be enjoying some success as a result of Yum! Brands having resurrected the Colonel Sanders character with an ever-changing roster of actors, but it's Taco Bell that has been the consistent performer and has carried the restaurant operator as it's struggled to find the right recipe to turn around both KFC and Pizza Hut. And a new survey suggests that the Mexican-food palace may help Yum! Brands deliver an earnings surprise when the company reports third-quarter earnings on Nov. 2.

According to the consumer-insights specialists at YouGov, Taco Bell's BrandIndex score spiked higher this summer and is at the highest level they've seen in five years.

The YouGov Index score measures on a daily basis the overall perception consumers have about a brand. The consumer survey outfit polls thousands of people every day, which results in some 2.5 million interviews each year. It averages their responses on six key metrics, including value, quality, reputation, satisfaction, and likelihood to recommend, and assigns a rating to the brand.

Taco Bell is suddenly moving higher, which ought to bode well for Yum! Brands.

YouGov found Taco Bell's Index score jumped from 10 in mid-July to an all-time high of 15 in mid-October. Not coincidentally, the action came as Taco Bell began introducing new menu items, such as the Naked Egg Taco in August, which is a breakfast item that uses a fried egg as a taco shell, and a National Taco Day special earlier this month that featured four hard-shell tacos for only $5. 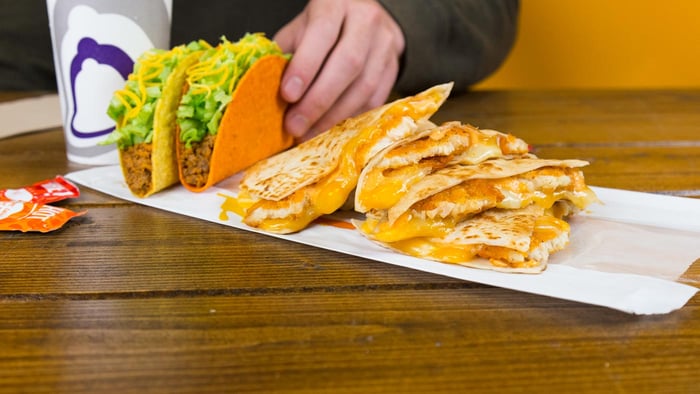 Yum! Brands has done well to ingrain Taco Bell into its customers' lives. For example, earlier this year, people could start getting married at its Las Vegas restaurant, and in late July it partnered with ride-sharing service Lyft to offer a Taco Mode that allows passengers to stop at a Taco Bell on the way to their destination. It followed a partnership between McDonald's and Uber.

Such promotions seem to be paying off. While the Lyft partnership was started too late to contribute to its second-quarter earnings, Yum! Brands reported that second-quarter system sales at Taco Bell rose 7% on a 4% rise in comparable-store sales, a better result than any of its other chains. Its restaurant margins are also tops at 22.8%, far better than the 15.7% realized at KFC and the 8.5% from Pizza Hut.

Yum! Brands stock is up roughly 19% so far in 2017 and recently hit a  record high of $78 a share. And there doesn't seem to be any reason why it can't go higher, particularly as Taco Bell just begins to scratch the surface of international expansion. 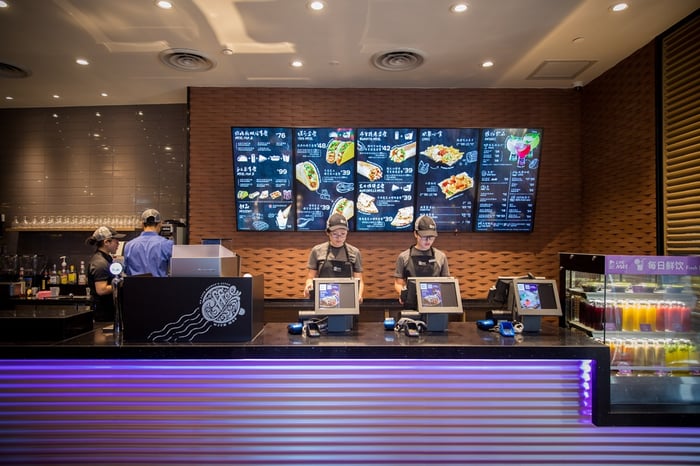 Taco Bell is only going to grow

While KFC and Pizza Hut have a large global footprint, particularly in China, where Yum! Brands spun off its division last year into Yum! China (NYSE: YUMC), Taco Bell has a negligible presence. However, that's going to change.

Currently there are only a few hundred Taco Bells operating in 22 countries outside the U.S., and Yum! Brands wants to grow the fast-food chain to as many as 9,000 locations in 40 countries by 2022, with special focus on Brazil, Canada, China, and India. It believes that it can grow sales by 50% from their current $10 billion level.

Those are obviously long-range plans, but in the nearer term, favorable to Yum! Brands' ambitions is a growing consumer perception that Taco Bell has the right combination of value and quality.