It's Halloween, and for Chipotle Mexican Grill (NYSE:CMG) that means dishing out $3 entrees to anyone showing up in costume after 3 p.m. at an outlet near you. The "booritos" event has become an annual tradition, but with the stock trading 26% lower than it was last Halloween and a painful 58% below where it was the Halloween before that, it's easy to see why shareholders are scared.

There's good and bad at Chipotle. There are tricks. There are treats. Let's go trick or treating with the out-of-favor burrito roller. 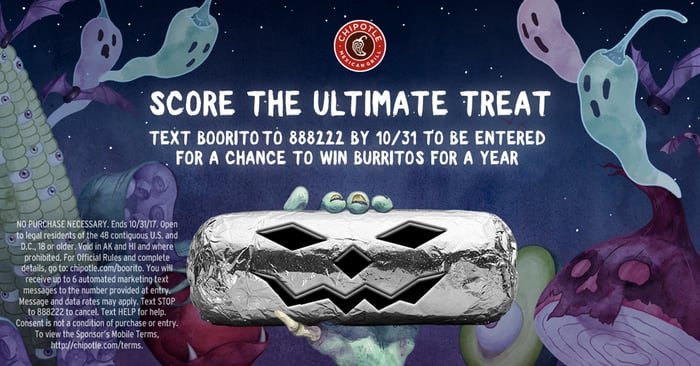 Shares of Chipotle are hitting fresh four-year lows this week, so anyone who has initiated a position in the stock since early 2013 is currently underwater. The problems at Chipotle are well-publicized. The downfall started in late 2015 when food-borne illness outbreaks in a couple of markets were tied to the chain's offerings. Comps would go on to take huge hits in the five subsequent quarters, and while results have turned largely positive in recent periods we're still nowhere near where the unit-level performances were at their peak two years ago. Comps were up just 1% in Chipotle's latest quarter, barely eating into the nearly 22% plunge from the prior year's third quarter.

Food that makes you sick is never a good look -- especially when "food with integrity" is your mantra -- but it's not the only thing that went wrong at the chain. Its latest new product introductions haven't been really successful. Chipotle is discontinuing chorizo, the savory sausage protein that it introduced two years ago. The recent queso rollout has also been problematic. Chipotle claims that 15% of their customers are opting for the all-natural cheesy topping and that 93% of those topping their entrees with queso are digging it, but social media is ablaze with people who hate the stuff.

It's not just the ghost of E. coli and queso bashing that's haunting Chipotle these days. The model itself is also no longer unique. The assembly line that seemed to set Chipotle and -- let's be frank, Subway and Panda Express -- apart is now being copied by everyone. The fastest growing niche in restaurants is gourmet pizza joints using the same assembly line approach to piece together pies that are fired up in quick-bake ovens. The rice bowls that Chipotle made popular can be had just about everywhere.

In short, unit-level sales may never reach the peak levels set two years ago. Throw in rising labor and occupancy costs, and it's not really a surprise that Chipotle is slowing down its expansion rate.

Shares of Chipotle are now trading for a little more than a third of where they were at their all-time highs during summer 2015. There's a valuation argument to be made, even if it rings hollow at first since Chipotle's profitability has fallen even faster than its stock. Chipotle's peak trailing earnings were $16.75 a share coming just after its third quarter of 2015. Adjusted trailing earnings now of $5.13 a share tag the stock with a lofty multiple of more than 50 times its bottom-line results, but the stock is also now trading at just 16 times its peak earnings from two years ago.

It's fair to argue that the past is unattainable, but it's just as fair to claim that results right now are depressed by brand-tarnishing and operational factors that should ease over time. Chipotle's true earnings power is somewhere in the middle, and with a still-growing store base -- there are 400 more stores now than there were when the stock peaked in 2015 -- the upside is potentially higher.

Chipotle isn't standing still. It's beefing up its mobile ordering platform, and doubling its production lines to keep digital orders flowing without interrupting the walk-ins. It recently lowered minimums for catering orders, and it's just scratching the surface on delivery. Let's also not bury queso just yet. The new item has helped increase the amount that the average customer is spending at Chipotle, and improving its queso is the easiest of fixes.

Chipotle may never be able to party like it's 2015, but there are plenty of reasons to believe that the chain can turn thing around.