Please ensure Javascript is enabled for purposes of website accessibility
Log In Help Join The Motley Fool
Free Article Join Over 1 Million Premium Members And Get More In-Depth Stock Guidance and Research
By Maxx Chatsko - Updated Nov 1, 2017 at 9:55AM

The storms will have a small effect on second-half 2017 earnings, but underlying operations remain strong.

The U.S. economy grew at a respectable 3% clip in the third quarter of 2017, according to the first official report on GDP estimates, despite multiple devastating hurricanes during that time period. But that doesn't mean that the storms left businesses unscathed. Blue-chip water, hygiene, and energy conglomerate Ecolab (ECL 0.26%) told investors that its full-year 2017 earnings will be roughly $0.08 per share lower than previously forecast due to hurricane-related disruptions.

That's not ideal, and it forced management to lower and narrow the range for full-year 2017 earnings expectations, but the minor disruptions weren't enough to derail the business momentum that has been building for several consecutive quarters. All things considered, Ecolab reported strong third-quarter 2017 earnings and sales growth -- you just have to dig a little to see it. 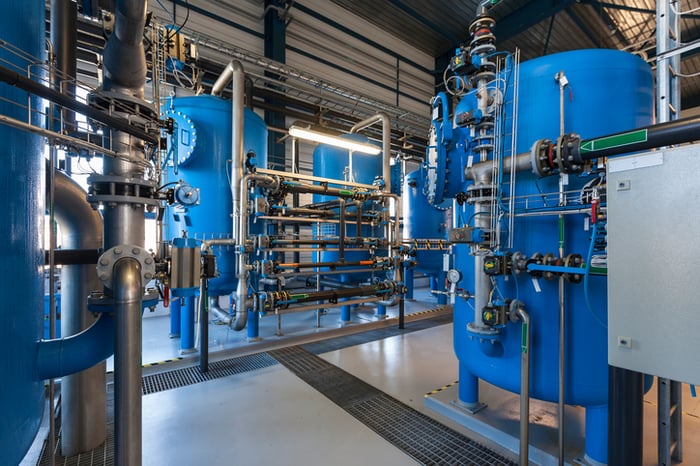 On the surface, Ecolab's third-quarter 2017 results don't look much different than the progress its achieved in recent quarters. Low single-digit year-over-year growth in sales and earnings continued the slow and steady (and predictable) march forward. Here's how Ecolab performed across its three business segments:

The results may seem to contradict management's previous expectations for accelerating growth, but once investors back out weather-related disruptions, it turns out Ecolab was spot on.

The narrative that previously dominated any discussion of Ecolab's earnings concerned the health of its energy segment, which has slipped from its historical perch in recent years, as energy producers reduced drilling activity. This segment returned to revenue growth in the second quarter of 2017, and kept the momentum going in the most recent three-month period, but is still struggling to grow operating income compared to 2016.

What's going on? The earnings slip looks scarier than it is. Ecolab's energy segment continued to see strong volume growth, but selling prices were lower and the cost of delivering products was higher in the third quarter. Additionally, past strategic moves to reduce operating costs resulted in low overhead for much of 2016, but expenses are rising as the company adds employees this year. These are hardly worrisome developments. Indeed, management noted that the hurricanes were responsible for about 6% of the 12.5% year-over-year slide in operating income.

The same can be said for the institutional and industrial segments, which management estimated to have absorbed hurricane-related operating income reductions of 1 percentage point and 3 percentage points, respectively, during the quarter. Excluding impacts from the storm, Ecolab reported stronger year-over-year operating income growth in the third quarter of 2017 than it did in the second. Management expects even better growth next quarter.

Ecolab's management can't control the weather, so it was forced to reduce its full-year 2017 expectations for adjusted diluted earnings per share (EPS) to the range of $4.65 to $4.70. That's down from the previous range of $4.70 to $4.90 per share, but includes an estimated $0.08 per-share impact from the hurricanes in the form of reduced customer demand and higher delivery costs. There's an additional reduction of $0.01 per share resulting from the sale of a business unit.

While the storms will have the unfortunate effect of lowering the potential in what has already been a strong year for Ecolab, they were a one-time event with short-term impact. Management even sounded a little excited about the relative strength that could be demonstrated in the first quarter of 2018, when hurricane-related financial impacts will no longer suppress business. Given the recent hurricane-adjusted growth, shareholders have no reason to think otherwise.