As Americans head into the holiday shopping season, many wonder which online retailer has the lowest prices. That, of course, has no absolute answer. Prices vary, and on certain items at different times, any digital shopping service may have the lowest price.

Over a broad selection of items tracked over time, though, a clear winner does emerge. The result may not shock you, but how close the gap between No. 1 and No. 2 has gotten may. 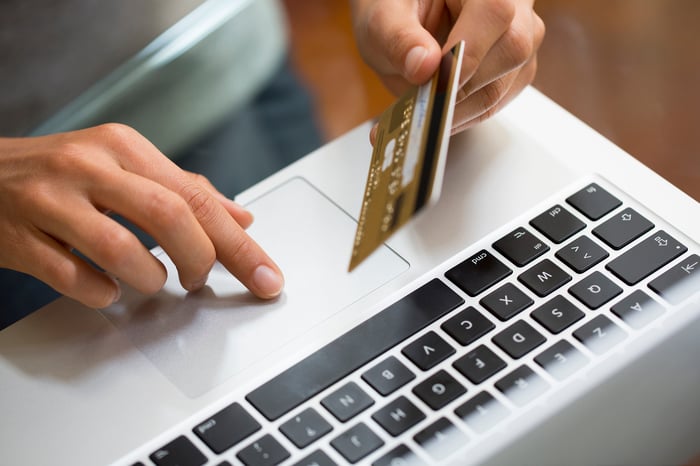 A new study shows there is a clear low-price leader when it comes to online shopping. Image source: Getty Images.

Which online retailer has the lowest prices?

Amazon (NASDAQ:AMZN) still has the cheapest prices, edging out rival Wal-Mart (NYSE:WMT) by 2.9%, according to an analysis of the prices of 52,000 items by Profitero, an e-commerce analytics company. The research shows that the brick-and-mortar chain has made major progress since 2014 when it was 9% more expensive than the digital leader.

Profitero compared identical, in-stock products, with daily prices averaged over a three-month period from June to August 2017. In addition to comparing Amazon and Wal-Mart, the report also examined Wal-Mart's Jet.com, Target (NYSE: TGT), and other specialist retailers. Jet came in 12.3% pricier than Amazon while Target lagged at 16.9% more expensive.

All of what the report defined as "specialist retailers," came in well behind Amazon. These companies, which included Staples, Best Buy, and Home Depot were dramatically more expensive than the online retail leader. Staples came in at 49% pricier than Amazon while digital pet supplies store Chewy.com led the specialist category by being "only" 7% more expensive than Amazon.

"This year there's been a marked rise in discussion about an online price war," said the report's author, Profitero SVP of strategy & insights Keith Anderson in a press release. "In our biggest ever study, we've set out to illuminate the pricing dynamic at play and to better understand the high-stakes race to the bottom we're currently witnessing between Walmart.com and Amazon.com."

This is good for shoppers

For consumers, it's fair to say that in nearly all cases, if you shop at Amazon or Wal-Mart you will get a better price. The two companies are close enough that it's worth checking both of them before making a major purchase.

"While lower prices are good news for shoppers, suppliers and retailers will inevitably feel the pressure as we head into peak holiday season, as this price war is only set to intensify," said Anderson.

Having the largest online (Amazon) and brick-and-mortar chain (Wal-Mart) as the two cheapest digital retailers puts every other chain in a bind. It's likely impossible to be profitable by competing on price, so other retailers must find other ways to differentiate themselves.

Best Buy has done that, to a point, with service, but most chains are going to struggle to compete. This report shows that when it comes to digital sales there are two clear leaders and everybody else. That's not likely to change this holiday season and it's possible that it becomes even more pronounced.

Amazon and Wal-Mart lead the way using their size and buying power to force prices down. That squeezes other retailers out and is good for consumers as long as the two pricing leaders have to compete with each other.