On the surface, IDEXX Laboratories's (NASDAQ:IDXX) third quarter wasn't the kind of outstanding report we've come to expect from the animal-testing company, which narrowed its revenue guidance for the year. But dig a little deeper, and the revenue issues weren't that big of a deal.

The hurricanes hurt sales a little. And less testing of cattle is hurting the company's farm-animal testing business, although that's a relatively small fraction of sales. Finally, IDEXX increased the use of programs that result in placements of its instruments, but don't necessarily translate to immediate revenue recognition in the quarter in which they're placed -- which hurts short-term revenue, but should benefit long-term profits. 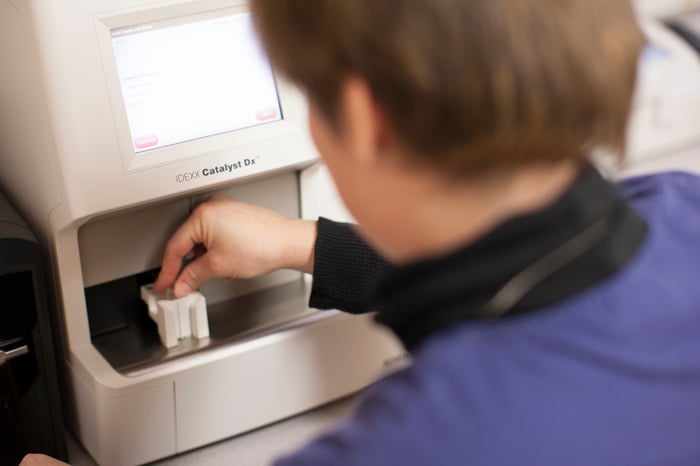 Jonathan Ayers, IDEXX Laboratories' chairman, president, and CEO, explained how a move toward bundled sales that results in revenue from CAG instruments being recognized over five or six years, as well as rental programs in emerging markets, might hurt revenue in the short term, but benefits the company's profits in the long term:

The primary purpose of instrument placements is to drive the very profitable recurring revenue, that's not only instrument consumables, but of course, can apply also to reference labs and Rapid Assay -- all components of the CAG Diagnostic recurring revenue. That -- so instruments is a means toward an end and that end is profitable.

Ayers also highlighted the SDMA test that will be available on the Catalyst instrument in the next few months as a driver for future growth:

The enthusiasm from our Catalyst customers for SDMA is exceptionally high as we continue to build the franchise for this unique and proprietary kidney function marker as an essential element of the chemistry panel, whether run in-house on Catalyst or sent out to the IDEXX reference labs. SDMA has the benefit of a growing number of third-party studies and the impact of almost 12 million patient samples run in our reference labs over the past two-plus years.

Management increased 2017 earnings-per-share guidance to $3.22 to $3.26, which is $0.07 higher than the midpoint of the previous guidance, although about $0.05 of that will come from the aforementioned tax benefits. The company also released preliminary guidance for 2018, which has revenue increasing 9.5% to 11.5% year over year, with earnings per share increasing 8% to 12%, as reported, or 15% to 19% on a comparable constant-currency basis, as IDEXX plans to increase operating margins by 75 to 125 basis points.