Investors weren't quite sure what to expect from AutoNation's (NYSE:AN) third quarter. Hurricane Irma was due to negatively impact its results, and light-vehicle sales have been slowing in 2017. Despite those headwinds to its total revenue, the company's bottom line surged past estimates, and its announced partnership with Waymo, Alphabet's (NASDAQ:GOOGL) (NASDAQ:GOOG) self-driving technology company, was enough to send shares up more than 15% Thursday. Let's dig into the financial highlights and what the partnership with Waymo means.

AutoNation's revenue checked in at $5.43 billion during the third quarter, missing analysts' estimates calling for $5.57 billion. And despite investors' concerns about negative impacts from hurricane Irma -- which decreased net income by roughly $8 million after tax, or $0.08 per share -- the dealership group's adjusted earnings per share reached $1.08, which was well above analysts' estimates calling for $0.84.

Other third-quarter highlights include a 2% increase in AutoNation's retail vehicle units, on a same-store basis, and a 9% increase in same-store used-vehicle gross profit. The dealership group also continued to return value to shareholders through share buybacks during the third quarter, repurchasing 9.2 million shares, or 9% of June 30, 2017, shares outstanding, for $400 million.

Despite the solid quarter, it's clear that the industry's plateauing sales are stunting growth a bit. Through the first nine months of 2017, AutoNation's revenue dropped 2% to $15.9 billion, and its net income from continuing operations dropped to $2.83 per share, compared to the prior year's $3.02. The real highlight for investors was likely the announcement that AutoNation has inked a multiyear service agreement with Waymo.

Investors know as well as anyone that industries evolve over time and that if companies don't adapt, they can quickly become irrelevant. That's a scenario many auto companies will face in the coming 10 to 20 years as the lines blur between Silicon Valley and historic Detroit automakers in a race toward a driverless-vehicle future. That's why investors reacted positively to AutoNation's agreement to provide long-term vehicle maintenance and repairs for Waymo's self-driving hybrid vehicle fleet. 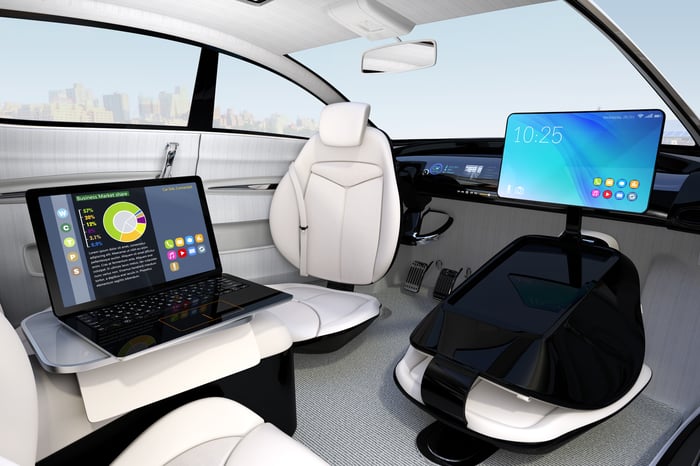 The deal makes sense for quite a few reasons. For one, as Waymo develops its driverless-vehicle technology and eventually expands its footprint across the nation, building out a repair infrastructure would be a costly option. AutoNation already has the infrastructure, with dealerships and service bays spread out across key U.S. markets. Furthermore, as it's a dealership group not tied down to specific automakers, it services roughly 33 different brands, which is experience and knowledge that will enable Waymo to expand the brands of vehicles it can include in its driverless fleet.

For AutoNation this is also a great move, because it establishes a connection to Silicon Valley's driverless-vehicle effort. And what some investors don't realize is that although its service business segment doesn't generate much of the company's revenue, it generates a lopsided portion of the company's gross profit. As you can see below, any moves that will bolster its service business segment could become lucrative for margins. 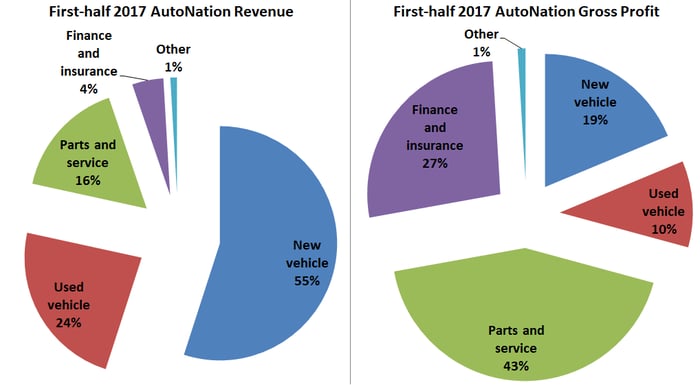 All in all, it was a solid third quarter for AutoNation that revealed some resilience against plateauing new-vehicle sales and showed management's willingness to adapt to the inevitable evolution to driverless-vehicle fleets. That's about all investors could ask for during the third quarter, so it's not too surprising that its stock jumped about 16% on Thursday after the announcements.