Launched nearly a year ago, this concept store was supposed to represent the future of retail. The Seattle location was outfitted with a network of cameras and other devices to automatically detect what customers took off the shelves and charge them through a smartphone app.

It was a quintessentially Amazonian vision, an experiment that leveraged technology to make the retail experience easier and more efficient. Notably, the 2,000 square-foot convenience store did not even have cashiers, an innovation that caused economists to decry the millions of cashiers that could soon become obsolete. Amazon billed the technology "Just Walk Out," and Amazon promoted the store as having no lines and no checkouts.

There's only one problem, though: Amazon never quite pulled it off. 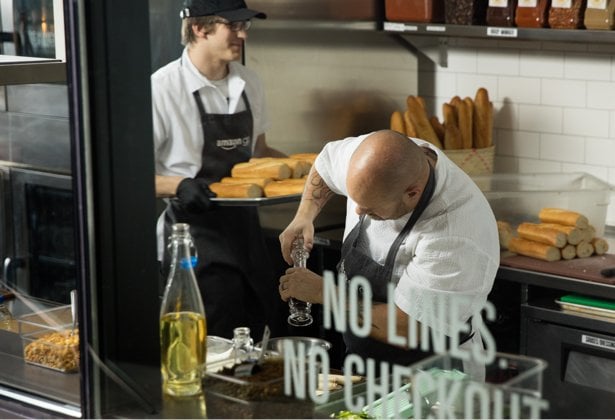 Amazon unveiled the store last December, opening it to employees only as it beta-tested the technology before allowing the general public to shop there. That grand opening was supposed to happen in the beginning of this year, but by the end of March Amazon said that technical challenges had caused it to delay the opening indefinitely. According to The Wall Street Journal, the technology ran into trouble when more than 20 people were in the store, or when customers did not replace an item in the spot they took it from.

Since then, there's been little news on the store, and the Amazon Go website says it's still only open to employees in its beta program.

At the time of its launch, many expected that Amazon Go would be the template for the company's expansion into groceries, as such technology would give it a decided advantage over the competition. However, something happened to redirect that narrative.

Amazon made its blockbuster $13.7 billion acquisition of Whole Foods, a move that may have been partly motivated by the struggles with Amazon Go -- the two parties didn't start discussing a deal until April. With that move, Amazon's focus on groceries clearly rests with Whole Foods rather than Amazon Go, and the recent announcement that Whole Foods is planning to hire 6,000 more people shows that old-fashioned manpower and not automation will be the driving force behind Amazon's expansion into groceries through Whole Foods.

Is it a failure?

It may be premature to call Amazon Go, a failure as the company may eventually work out the kinks and make the technology operable. But it is a disappointment, as it's been 11 months since the store first opened in beta, and there's no indication of meaningful progress.

However, asking if Amazon Go has failed is the wrong question. The store seems to be exactly the kind of failure that Amazon CEO Jeff Bezos talks about when he says things like "I've made billions of dollars worth of failures" and "Failure and innovation are inseparable twins." More than any other business leader, Bezos has embraced experimentation and risk-taking, and the "Day One" philosophy that he outlined in a recent letter to shareholders is part of what's made the company so successful.

Amazon just posted 34% revenue growth year over year in its most recent quarter, a phenomenal pace for a company on its way to delivering more than $175 billion in revenue this year. With a record like that, the success or failure of Amazon Go isn't material to the overall company's performance.  While such technology would certainly help it gain an edge in groceries and physical retail, the company's strategy with Whole Foods indicates that it doesn't need it to succeed in that sector. Amazon Go may have stalled, but the company likely has dozens of other experiments ready to take its place.