Perhaps concern that the grocery store would be automated after its acquisition by Amazon was premature.

One of the fears expressed when it first became known that Amazon (AMZN -2.02%) planned to buy Whole Foods was that the online retailer would replace human workers with robots. That may be because the digital sales leader tested a convenience store concept, Amazon Go, that did not have traditional human-manned checkout stations. Designed to run without the staff required at a regular store, Go sparked fears that Amazon saw the future of retail as being automated.

It might, but the future is certainly not now. Amazon plans to hire 120,000 seasonal holiday workers for itself, and Whole Foods announced recently that it wants to hire 6,000 new workers, including full- and part-time workers for seasonal and permanent positions. 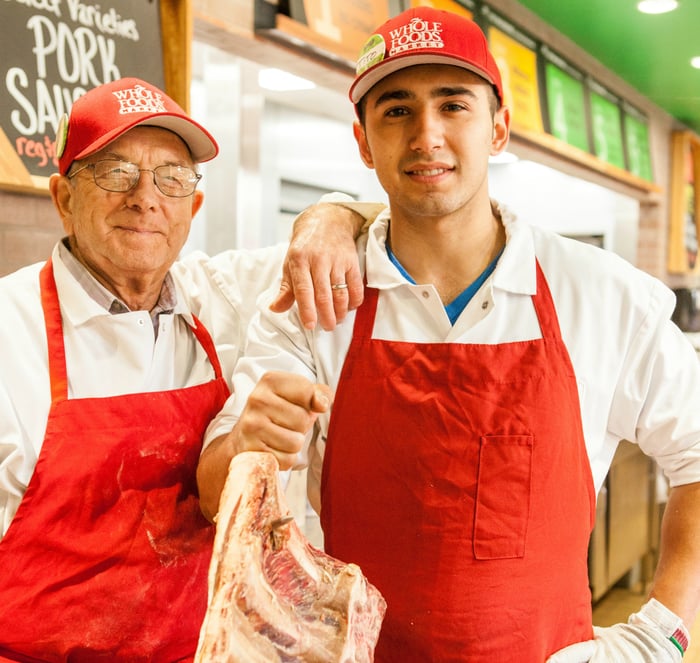 What is Whole Foods doing?

Whole Foods is following a practice that its parent company has successfully used. Whole Foods will hold a National Hiring Day on Nov. 2 at all of its U.S. stores to fill 6,000 positions. Whole Foods has 87,000 workers around the world, according to S&P Capital IQ.

"The event includes full-time and part-time opportunities for both seasonal and permanent positions, including cashiers, culinary experts, and prepared foods specialists," according to a press release. "Candidates can visit any Whole Foods Market store on Nov. 2 and receive an interview, with opportunities for on-the-spot job offers."

Whole Foods and Amazon face a challenging hiring market because unemployment dropped to 4.2% in September, according to the Bureau of Labor Statistics (BLS). That's the lowest rate in a decade and it means that the labor market is very tight.

Whole Foods hopes to entice workers with its own slant on retail employment. "Whole Foods Market offers competitive pay and benefits for both full-time and part-time Team Members, including a 20% in-store discount," according to the press release. "With flexible schedules and an empowered environment, these positions provide the opportunity to grow in a company that is focused on providing customers with the best possible in-store experience and service."

Whole Foods may be able to fill these positions by offering a better pay and benefits package than some of its rivals. Going forward however, it's not unreasonable to think that a limited pool of available labor may make it logical for Amazon to automate where it makes sense.

Since adding the grocery chain Amazon has pushed its global headcount to over 541,000. That's a stunning amount of people making it one of the biggest private employers in the world. The online retailer has partially mitigated its hiring needs in its warehouses and distribution centers by using robots alongside humans.

That seems likely at Whole Foods where automated checkout and ordering at butcher or deli counters would just make sense. Those efforts would keep hiring needs in check, but would probably not end the demand for an ever-increasing amount of human employees.

What's next for Whole Foods?

Automation makes sense when considering the long-term investment in replacing people with machines. That day could come sooner rather than later for Whole Foods if the labor market remains tight. Fewer workers pushes wages higher and could increase turnover. Both of those could make automating some tasks worthwhile.

As Whole Foods adds delivery, Amazon returns, and generally increases its scope, expect a balance of humans and automation. Exactly how that will break down may well depend on how easy or difficult it is for the company to find people to fill its open positions.