These days, it's hard to find a stock more beaten down than Frontier Communications (FTR). The regional telecom's shares have been absolutely hammered over the past few years -- to the point where they're touching the lowest they've been in over three decades.

That's quite a dive. Let's take a closer look to determine if Frontier might be able to pick itself up from the floor and get its stock moving higher again.

Frontier stock's latest major price swoon began in early 2015, very shortly after the company agreed to pay over $10.5 billion to acquire a big set of Verizon Communication (VZ 0.31%) assets in Florida, California, and Texas. That was the second monster deal between the two companies; in 2009, Frontier parted with $8.6 billion to buy similar assets in 14 states. 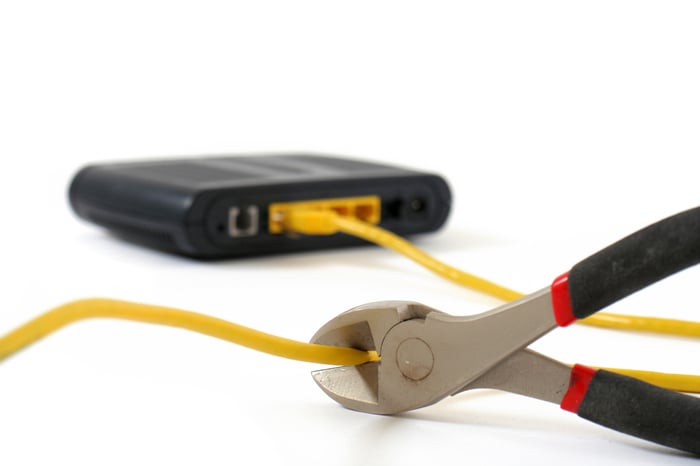 When the 2015 deal closed last year, Frontier took over approximately 3.3 million voice connections, 2.1 million broadband accounts, and 1.2 million FiOS video subscribers formerly owned by Verizon. At a stroke, Frontier doubled its size, and then some.

The company placed this massive bet because, in the words of CEO Daniel McCarthy, "[i]t significantly expands our presence in three high-growth, high-density states, and improves our revenue mix by increasing the percentage of our revenues coming from segments with the most promising growth potential."

The problem was that this flew in the face of two major trends: cord-cutting and what we can call broadband migration. The former is the well-known practice of ditching traditional pay-TV providers like FiOS for a smorgasbord of streaming services. The latter, which is related to cord-cutting, refers to customers moving to cable internet from the DSL technology delivered over phone lines.

This isn't only a Frontier problem; it's been prevalent throughout the telecom industry. Yet the company was particularly vulnerable to it because of its size and scope -- it's much smaller, as you can see below, than top peers Verizon and AT&T (T 0.56%). Compounding that, unlike those giants, Frontier doesn't have other significant business units (like AT&T's DirecTV) that it can mobilize to help make up for the declining revenue. 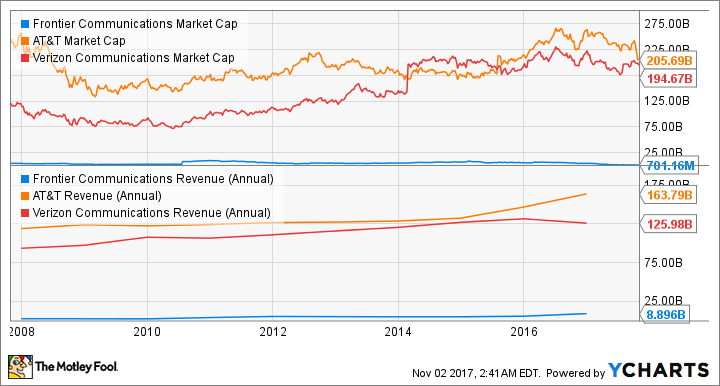 Since the latest Verizon deal closed, the purchased customer base in Florida, California, and Texas has eroded in every quarter. And for more than a year, the company's revenue has dropped from quarter to quarter, with the bottom line landing consistently in the red.

A deep (62%) dividend cut earlier this year shored up the finances somewhat; unfortunately, it also gave investors a solid reason to abandon or avoid the shares. A subsequent reverse stock split saved the company from an embarrassing delisting but ultimately couldn't halt the share price slide.

It's been quite a tumble. From the start of this year alone, Frontier's stock has plummeted by almost 83%.

It's hard to see how Frontier can crawl its way out of this. It invested heavily in technology its customers don't seem to want much these days, and there's no backup revenue source. The dividend, even at the drastically reduced rate, yields an insane 27%. That's not a sign of financial strength, nor does it indicate a deep bargain find -- it's a flashing red light for a company that's in deep trouble.

I can't imagine any scenario in which Frontier stock rebounds from even this drastically reduced level. I very much doubt this will be a recovery story.