What's the best-performing marijuana stock so far in 2017?

You might be surprised to learn that it's not one of the red-hot Canadian medical marijuana growers awaiting legalization of recreational cannabis use next year. Instead, the top marijuana stock with less than two months remaining in the year is actually 22nd Century Group (NYSEMKT:XXII). Shares of the plant biotechnology company are up more than 90% year to date.

However, 22nd Century Group isn't flying nearly as high as it was. By early October, the stock had more than tripled in value since the beginning of the year. Then the bottom fell out. Here's how 22nd Century Group climbed to the top spot among marijuana stocks -- and why its reign could be in jeopardy. 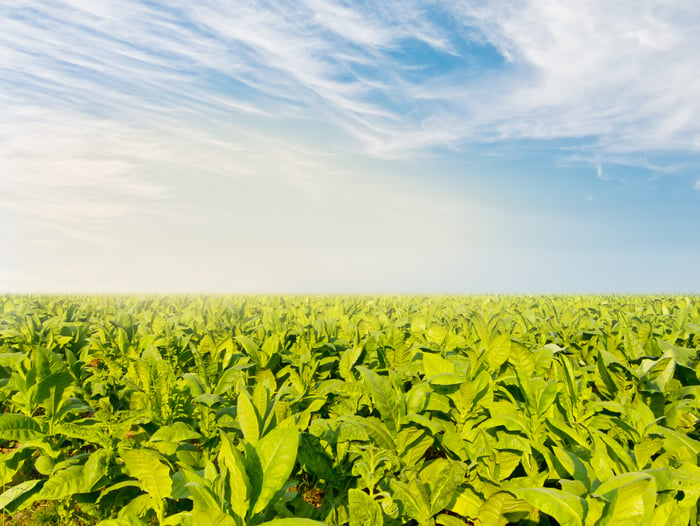 You might have noticed that the picture above shows tobacco, not marijuana. 22nd Century Group has genetically engineered cannabis plants to contain no THC (the main mind-altering ingredient in cannabis), which qualifies it to be lumped into the general category of marijuana stocks. However, the company's primary focus is on tobacco.

Interest in 22nd Century Group's tobacco technology has fueled the tremendous run-up in its stock price this year. The company's primary claim to fame is that it has genetically engineered tobacco plants to have much lower levels of nicotine than ordinary tobacco plants.

Two events served as key catalysts for the stock. First, the U.S. Food and Drug Administration (FDA) announced sweeping plans to reduce tobacco-related disease and death in July. A key component of this plan is to require tobacco companies to lower nicotine levels in cigarettes to non-addictive levels.

This announcement was music to the ears for 22nd Century Group's shareholders. The company says that it alone has the capability of growing tobacco at nonaddictive levels. A license agreement between 22nd Century Group and British American Tobacco was terminated, allowing the small biotech to explore opportunities with other companies. 22nd Century Group has indicated that multiple companies in the tobacco and pharmaceutical industries have "expressed strong interest" in teaming up with it.

The second catalyst for 22nd Century Group was the announcement in early October of preliminary results from a late-stage clinical study evaluating approaches to lowering the addiction potential of cigarettes. These preliminary results found that an immediate reduction to very low nicotine levels in cigarettes was the best pathway to reduce harmful effects from smoking tobacco cigarettes. 22nd Century Group's very-low-nicotine cigarettes were used in the study.

With such great news for 22nd Century Group, why did the stock plunge in recent weeks? The company needed to raise cash, so it announced a stock offering of nearly 20.6 million shares. This move caused 22nd Century Group's share price to fall for a couple of reasons.

There's a twist, though. 22nd Century Group stock's price has fallen more than the lower offering price or the dilution would have caused on their own. It's possible that some investors have also decided to take some profits off the table after the massive gains from earlier in the year.

The good news from the stock offering is that 22nd Century Group now has plenty of cash. The company says that it can fund operations for at least five years. Investors shouldn't have to worry about dilution for a long time to come.

But can 22nd Century Group stock bounce back? Probably, but the timing could depend heavily on how quickly the FDA moves forward with its plans. Federal agencies aren't known for their speed in making things happen. Even if the FDA drags its heels, however, one or more high-dollar deals with the companies that 22nd Century Group said have expressed interest could light a fire under the stock once again.

As for the marijuana efforts of this marijuana stock, it's too early to know how much potential there could be. Industrial hemp farmers could benefit from plants genetically engineered to have low THC levels. Medical marijuana growers could drive demand for cannabis plants with high cannabidiol (CBD) levels. For now, though, 22nd Century Group's primary appeal for investors will continue to be with its tobacco technology.

Don't be surprised if 22nd Century Group doesn't end up as the top marijuana stock of 2017, despite its current No. 1 position. There's still plenty of time left before Dec. 31 -- and those Canadian marijuana stocks enjoy strong momentum headed into 2018.