Shares of Cree (NASDAQ:CREE) gained 26.6% in October 2017, according to data from S&P Global Market Intelligence. The light-emitting-diode lighting specialist delivered a mixed first-quarter earnings report in the middle of the month, with a side of optimistic turnaround signals provided by the company's management.

In the first quarter of fiscal year 2018, Cree's sales fell 3% year over year to land at $260 million. On the bottom line, adjusted earnings per share fell from $0.15 to $0.04. The revenue figure fell just short of Wall Street's $361 million target but earnings turned out a penny stronger than expected.

Looking ahead, Cree expects second-quarter sales to stop near $350 million while the bottom line should show an adjusted net profit of roughly $0.02 per share. Both of these targets are slightly ahead of the current analyst view, and the recently appointed CEO hopes to start a significant turnaround from this trough. 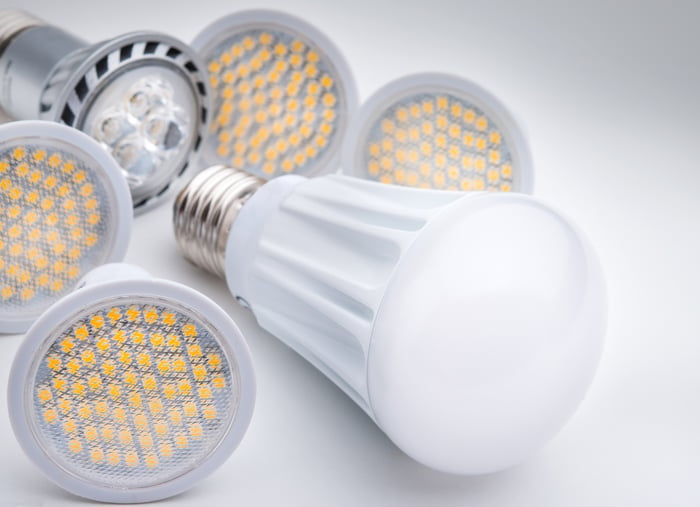 CEO Gregg Lowe's turnaround talk was the real driver of Cree's 16% single-day jump and the overall uptrend in October. The former Freescale CEO is still hammering out the details of an actual turnaround plan, "a process that will be measured in months, not weeks, and certainly not years."

That being said, Lowe appears to be focusing on the brass tacks of the LED business, tightening up operations and sales processes across Cree's various operations. In particular, the Wolfspeed division that builds semiconductors for power controls and radio frequency processing was pulled back from the selling block to deliver a 33% year-over-year sales boost amid widening gross margins. The former pariah of Cree's lighting-focused business has already become a significant growth engine and I can't wait to see what turnaround guru and semiconductor industry veteran Lowe will do with it.