Plains All American Pipeline (NASDAQ:PAA) reported another mixed quarter. While the oil pipeline company's earnings rose and were slightly ahead of expectations despite a slight impact from Hurricane Harvey, the MLP reduced its full-year guidance for distributable cash flow. That said, after recently slashing its payout, it will generate more than enough cash to pay that lower rate with plenty left over for its debt reduction plan, which is good news for its investors as well as those in its majority owner Plains GP Holdings (NYSE:PAGP).

Plains All American Pipeline reported $489 million in adjusted EBITDA, which was 6% higher than last year's third quarter. Meanwhile, distributable cash flow rose 2% to $299 million, with the lower growth rate due to an increase in interest and maintenance expenses. As the following chart shows, two of its three segments improved versus the prior year: 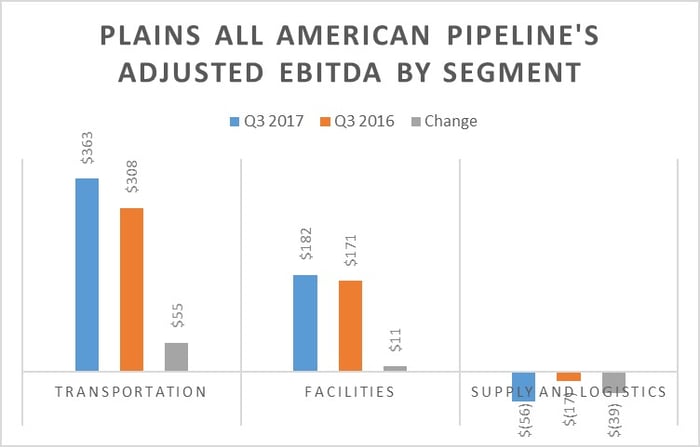 Data source: Plains All American Pipeline. Chart by author. In millions of dollars.

The transportation segment led the way, with adjusted EBITDA jumping 18% from last year's third quarter. The primary driver was an increase in volumes flowing through the company's Permian Basin systems, which includes the Alpha Crude Connector it bought from Concho Resources (NYSE:CXO) earlier this year. Volumes on that system have been on the rise, due in part to Concho's rapid growth rate this year, with its oil output up 31% year over year and 6% higher than the second quarter. These growing volumes from Concho and others have enabled Plains to earn higher volume-based fees.

Meanwhile, earnings in Plains' facilities segment rose 6% year over year. The primary driver was higher fee-based revenue from some of the company's natural gas liquids (NGL) facilities. That helped offset lower actives at its rail facilities as well as the impact from an asset sale it completed earlier this year.

Partially muting the growth from those two segments is the continued weakness in the company's supply and logistics business. While the seasonality of its NGL supply business played a role, adjusted EBITDA declined $39 million year over year because of "continued competitive pressures" that compressed margins.

In addition to the persistent headwinds impacting supply and logistics, Plains noted that downtime due to Hurricane Harvey caused fewer volumes to flow through some of its systems during the quarter. That resulted in about a $6 million hit to adjusted EBITDA during the quarter. However, despite that impact, CEO Greg Armstrong noted that "PAA reported third-quarter results that were slightly above guidance." 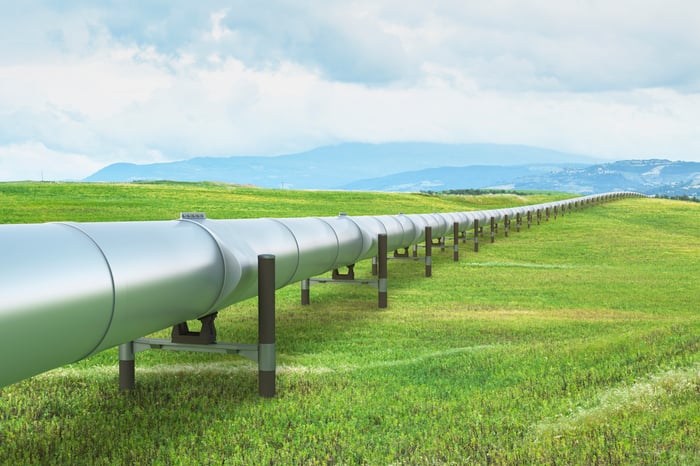 However, even though third-quarter results came in above the company's expectations,  it watered down its full-year guidance once again:

Overall, there was no change to adjusted EBITDA guidance, which remained at the $2.075 billion it estimated last quarter as higher facilities earnings should offset weaker transportation profits. What changed was distributable cash flow guidance, which the company reduced by $40 million. Driving the decrease is an increase in planned maintenance spending and income taxes. That pushed the company's guidance further below its initial expectations, due primarily to much more challenging market conditions for its supply and logistics businesses.

While 2017 has proven to be more difficult than Plains initially expected, the company sees better days ahead. That's because it has several growth projects under construction, which it currently estimates could drive adjusted EBITDA up more than 20% next year while fueling a more than 35% surge in distributable cash flow.

Further, the company continues making progress on its debt reduction plan, which would see it pay down $1.4 billion in borrowings by early 2019 and push leverage from 4.7 times debt to EBITDA down to its target range of 3.5 to 4.0 times. At that point, Plains would be in the position where it can start returning more cash to investors, likely by increasing its distribution, which currently yields 5.8%. Those future increases would also flow down to Plains GP Holdings, enabling it to boost its 5.6% payout.

Waiting for the plan to work

Plains All American Pipeline has been strategically repositioning to reduce its exposure to the volatility of its supply and logistics business by investing to expand its fee-based transportation and facilities segments. That plan is starting to bear fruit, given that the company grew earnings in the third quarter. However, the big payoff will be more evident over the next year and a half, when the bulk of its growth projects should enter service, which would position Plains to deliver steady distribution growth in 2019 and beyond.