The stock market had a relatively quiet day on Tuesday, leaving major benchmarks little changed from yesterday's close. After initial optimism about the prospects for tax reform, investors seem to now grasp the challenge in getting legislation through Congress quickly enough to implement changes for the 2018 tax year. Many believe that the strong performance in stocks in 2017 has hinged on eventual reductions in the corporate tax rate, and if tax reform grows less certain, markets could see their volatility levels increase. Yet several individual companies enjoyed good news that lifted their shares, and Valeant Pharmaceuticals International (NYSE:BHC), Denbury Resources (NYSE:DNR), and Kindred Healthcare (NYSE:KND) were among the best performers on the day. Below, we'll look more closely at these stocks to tell you why they did so well.

Shares of Valeant Pharmaceuticals International jumped 17% after the controversial drug manufacturer posted its third-quarter financial report. Revenue for the company was down more than 10% from year-earlier figures, but it managed to earn a profit thanks to a one-time tax benefit. Even though Valeant suffered from issues like the loss of patent exclusivity on some of its treatments, growth in areas like its Bausch + Lomb business and its Salix drug unit helped to bolster confidence about the overall company's future. Valeant still has a lot of work to do, and continuing to cut its debt and find ways to bolster sales and profits will be priorities going forward. Still, Valeant made enough progress to satisfy shareholders for the time being. 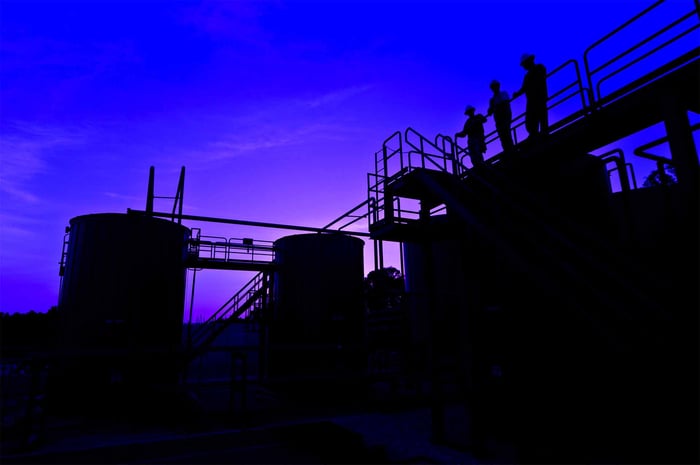 Denbury Resources stock rose more than 7% in the wake of the company's third-quarter financial report. The oil exploration and production company boosted its revenue and adjusted net income from the year-earlier period, taking advantage of more favorable conditions in the oil patch. Denbury CEO Chris Kendall celebrated the high-quality assets that the company has, and even with negative impacts from Hurricane Harvey, Denbury managed to keep production levels up. With oil prices having moved higher recently, the energy company is optimistic about its ability to boost production further while keeping costs under control to maximize overall profit.

Finally, shares of Kindred Healthcare soared 40%. The healthcare services provider's third-quarter results included a net loss for the quarter and substantial declines in revenue, but investors instead seemed to focus on the progress that Kindred has made toward making major strategic moves. CEO Benjamin Breier said that efforts to exit the skilled nursing facility business and mitigate negative impacts from its long-term acute care unit are starting to pay off. Kindred cited the hurricanes that hit Texas and Florida as contributing factors to the declines in financial results, but investors were pleased that the healthcare company has been able to hold up as well as it has while taking big steps toward optimizing its business opportunities in the years to come.