Over the past decade, Apple (NASDAQ:AAPL) has stashed a significant chunk of its iPhone-fueled profits overseas to avoid paying high corporate taxes in the United States. As a result, by the end of September, Apple had more than $250 billion of cash and investments held outside the U.S.

However, the tax reform bill currently being considered by Congress would dramatically change the U.S. tax code for corporations. If it passes, it would enable Apple to repatriate a huge amount of cash -- and return most of it to shareholders. Let's take a look at just how much money could become available.

Tax reform is on the table

Many experts believe that the United States' statutory corporate tax rate of 35% is too high. For one thing, it encourages corporations (including Apple) to find various loopholes to reduce their tax liabilities. It also has induced some companies to relocate to lower-tax countries, leading to a loss of high-paying jobs in the U.S. Apple keeps most of its cash overseas to reduce its tax burden. Image source: Apple.

Under the Republican proposal, the statutory corporate tax rate would be reduced to 20%. In addition, the U.S. would move to a territorial tax system under which foreign profits would no longer be subject to U.S. tax in most cases.

Finally, the proposed tax bill would impose a one-time tax of 12% on liquid assets held overseas. However, that cash would no longer be subject to repatriation taxes upon being brought back to the U.S.

What it would mean for Apple

As of the end of September, Apple had $268.9 billion of cash and investments on its balance sheet. Of that total, $252.3 billion was held overseas for tax purposes, with the remaining $16.6 billion held in the United States.

Based on the current tax proposal, Apple would incur a tax liability of $30.3 billion on its cash and investments held abroad. This sum would be payable over eight years. But even if Apple set aside $30.3 billion immediately to cover the tax bill, it would still have $222.0 billion that could be repatriated with no further tax consequences.

This doesn't mean that Apple will be able to return $222 billion to shareholders anytime soon. That's because Apple has issued an enormous amount of debt over the past few years, in order to pay for its buybacks and dividends without repatriating any of its overseas cash.

At the end of September, Apple had $103.7 billion of term debt and another $12.0 billion of commercial paper outstanding. Just this week, it issued even more debt. If Apple were to spend all of its cash while leaving its debt load intact, its credit rating would plummet.

By the end of 2017, Apple is likely to have even more cash available. In each of the past two years, it has generated more than $27 billion of cash from operations during the fall quarter. In 2014 -- i.e., during the strong iPhone 6 product cycle -- cash from operations reached $33 billion in the same period. Based on Apple's guidance for a record-setting first quarter, it is likely to add tens of billions of dollars to its cash and investments this quarter. 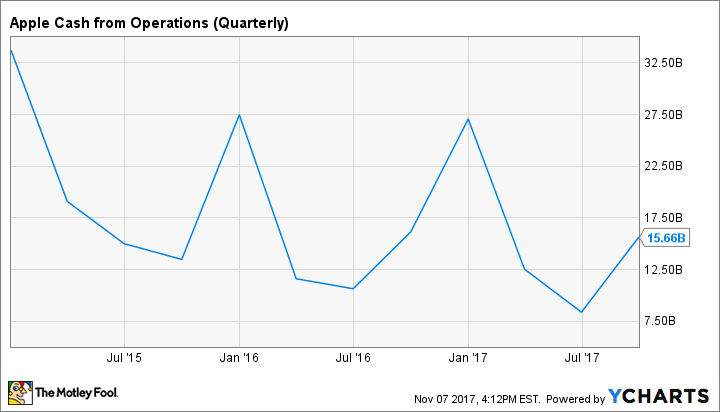 I believe that Apple is likely to set aside $100 billion-$150 billion of its cash initially to give it a net debt level near zero. Over time, it can pay off its debt with cash on hand. The high cash balance would also give it the flexibility to pursue a large acquisition if it made sense to do so.

Including its $222 billion of overseas cash (net of a 12% tax), $16.6 billion of domestic cash, an estimated $25 billion increase to its cash balance this quarter, and a required cash buffer of $100 billion-$150 billion, Apple would have $113.6 billion-$163.6 billion available to return to its shareholders by year-end.

This is arguably too much to return through share buybacks in a short period of time. (That's especially true because Apple will be churning out more cash than ever on an annual basis under the proposed new tax code.) However, Apple could pay a $15-$20 special dividend to get its excess cash into shareholders' hands in a speedy manner. That would be a nice windfall for its investors -- and would leave the company with a rock-solid balance sheet.