Sports team owners Rogers Communications (NYSE:RCI), Manchester United (NYSE:MANU), and Madison Square Gardens (NYSE:MSGN) have been great investments so far in 2017. If you want in on some baseball, basketball, or soccer action, these may catch your eye, but there are some risks to bear in mind. 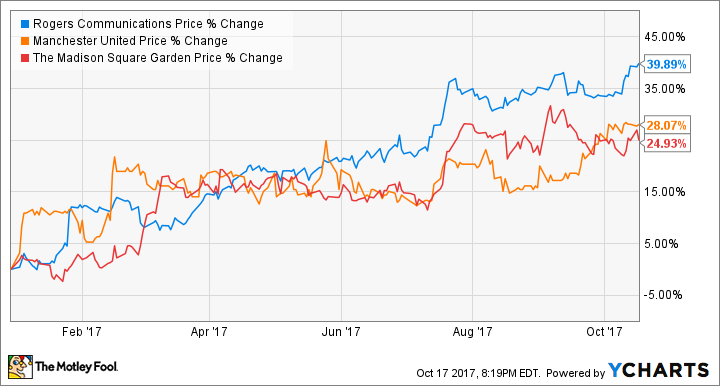 It's telecom, but it's also sports

Rogers Communications is Canada's largest wireless provider and a leading internet and cable company, but it also happens to own Major League Baseball's Toronto Blue Jays. It also has interests in professional hockey, basketball, and soccer with the Toronto Maple Leafs, the Toronto Raptors, and the Toronto FC, teams it jointly owns with Canadian telecom BCE (NYSE: BCE).

Seeing a diversified portfolio of professional athletics endeavors paired with this year's nearly 40% return may be enough for sports investors to jump on board, but it's worth noting that the four teams make up only a small percentage of Rogers' business. Media revenue, which includes sports broadcasting business, made up a mere 16% of the total last year.

Through the first half of 2017, the media segment was on the rise, up 4%. Operating profit was down 15%, though, due primarily to increased payroll for the Blue Jays team and some adjustments made in the way the broadcasting business is reported. Thus, investors shouldn't buy Rogers solely for its sports interests, but it could be an added bonus to the telecom giant. The stock has a trailing price-to-earnings ratio of 34, a P/E based on one-year forward profits of 18, and pays a 3% dividend yield.

Football, or soccer if you're a stateside sports purist, has been gaining in popularity among Americans over the years. With a 28% return thus far in 2017, Manchester United's stock might be a reason to pay more attention. Granted, since its IPO in 2012, shares of the iconic club are up only 30%, notching most of their gains within the first six months of going public. The stock has been a stalemate ever since, going up and down but never really pushing through to new highs. 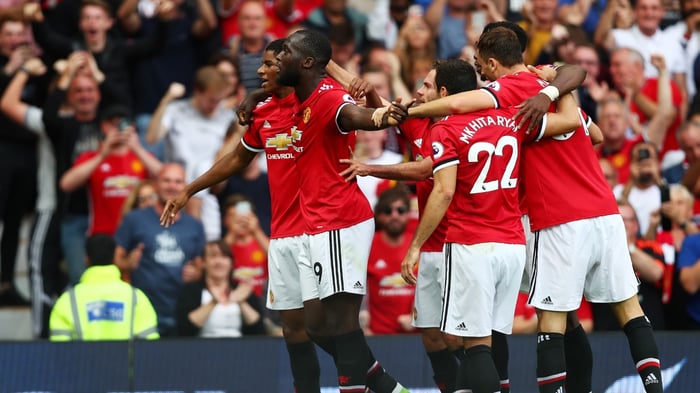 The most recent rally is due to 2016/17 season revenue reaching an all-time record, increasing 12.8% from the prior season. Much of that had to do with a successful year, with the team taking two domestic championships as well as winning the Europa League and qualifying for the 2017/18 UEFA Champions. All of that translated into a 38% increase in broadcasting revenue.

The executive team guided for the upcoming year's revenue to be in line with the last year with a slight dip in profitability. As revenues are highly dependent on team competitiveness, perhaps some caution is in order after a successful run. But if riding that ebb and flow is your thing, and if you think soccer will continue to gain in popularity, you'll get a 1% annualized dividend yield while you wait.

Live from the Garden: Double-digit returns?

The Madison Square Garden Company -- which includes venues like the namesake in NYC, Radio City Music Hall, and the Forum in Inglewood, CA -- has interests in professional basketball with the New York Knicks and New York Liberty, hockey with the New York Rangers, and esports with Counter Logic Gaming.

This year's rally is due to an 18% increase in revenue, and a 43% increase in adjusted operating income -- excluding things like depreciation and amortization of real estate and other assets. Business was helped by team playoff appearances, new entertainment events, and more venue sponsorships.

This company's diversified holdings, both across properties and professional organizations, a sizable entertainment business riding sidecar, and a bet on the future with esports make it an intriguing athletics play. Bear in mind that real estate bears special risks, though, as does the production and sale of entertainment events. Expect a bumpy ride from this stock, which pays not dividend.

There are only a few "pure" sports stocks available, with most professional teams either private or mixed in with other businesses. While owning part of a sports team sounds exciting, it can be a volatile venture with business prospects hinging on athlete and team performance.

For a relatively smoother and more predictable ride, I suggest looking into an athletic apparel maker like Nike or Adidas, or my favorite underdog, Skechers.