Shares of Whiting Petroleum (NYSE:WLL) slumped for much of October and were down more than 12% for the month at one point. However, the company quickly reversed that decline, and then some, after posting better-than-expected third-quarter results on the 25th. That drove the stock higher the rest of the month, enabling it to close up 10%.

Whiting reported an adjusted loss of $50.1 million, or $0.14 per share, during the third quarter. However, that was $0.06 per share better than the consensus estimate. Furthermore, that beat came despite the impact of selling some assets in North Dakota as well as an unplanned outage at a natural gas plant in the region. Those factors combined to cause a 5% dip in production versus the second quarter, which fell to an average of 114,350 barrels of oil equivalent per day (BOE/D). 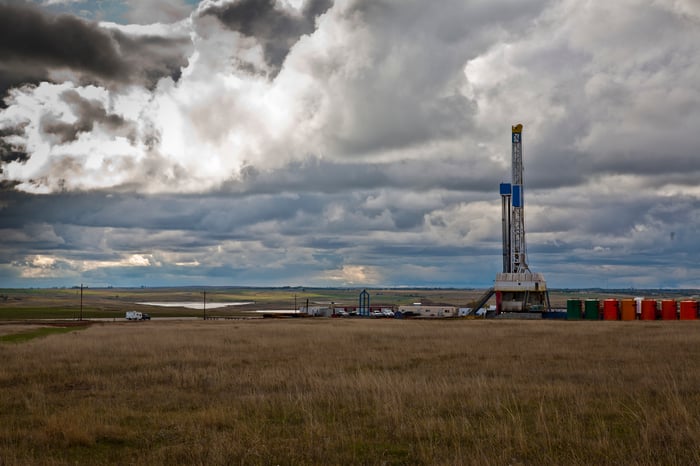 That said, the company partially made up for that lost output by reporting a 78% surge in production from its Redtail area in the Niobrara shale from the second quarter, though that was off a small base of just 6,600 BOE/D. In addition, Whiting reported that it realized a 12% higher sales price for its oil during the quarter, which when combined with its continued costs saving initiatives enabled the company to trim its loss.

Whiting expects to reverse its production decrease in the fourth quarter, with the company anticipating that output to grow 10%. The company also noted that it can continue growing in 2018 since it should generate significant excess cash flow and earn solid drilling returns at current oil prices. That said, its growth prospects and balance sheet aren't as good as those of some of its rivals, so the potential reward still doesn't seem to be worth the extra risk.