Industrial giant Emerson Electric Co. (NYSE:EMR) offers investors a generous 3% yield at a time when an S&P 500 index fund will only get you 2% (or so). If you are looking for a dividend stock, it would be a good idea to do a deep dive on Emerson, even though it's not exactly cheap right now.

The question you want to ask, however, isn't how high the dividend is, but how safe it is. If history is any guide, the answer is plenty safe. Here's what you need to know.

Companies that increase their dividends annually start to get kudos when the string of increases reaches ten years. It shows a commitment to returning value to shareholders in good markets and bad -- and in a concrete way, since a dividend is basically putting cash into an investor's hands. 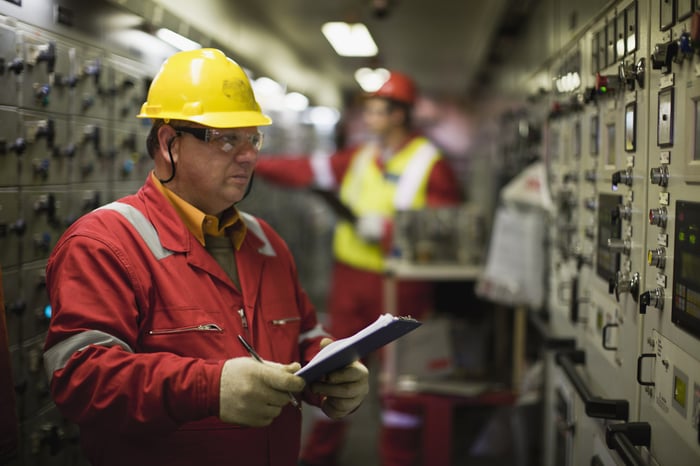 No question about it, 10 years of annual dividend hikes is impressive... but Emerson's streak is up to 60 years. That's more than half a century of annual increases. It's a streak that only a handful of companies have managed to match. If you are wondering about this industrial giant's commitment to paying a dividend, stop. Rewarding investors with dividend hikes is very important to Emerson.

Keeping up with demand

And dedication to rewarding investors is really the starting point here, but it isn't the end point. You also have to consider the company behind the incredible dividend history. A stagnant, money losing company couldn't keep paying a dividend, let alone increasing it, for very long before it would implode. But there's really no need to worry about Emerson.

For starters, it has a diversified business that management has shifted and changed over its more than 100 year history. When the company was founded it produced fans, but the motors it made for fans were quickly put into other devices like washing machines. Over time it broadened from motors into areas such as process control instruments, compressors, valves, and regulators. 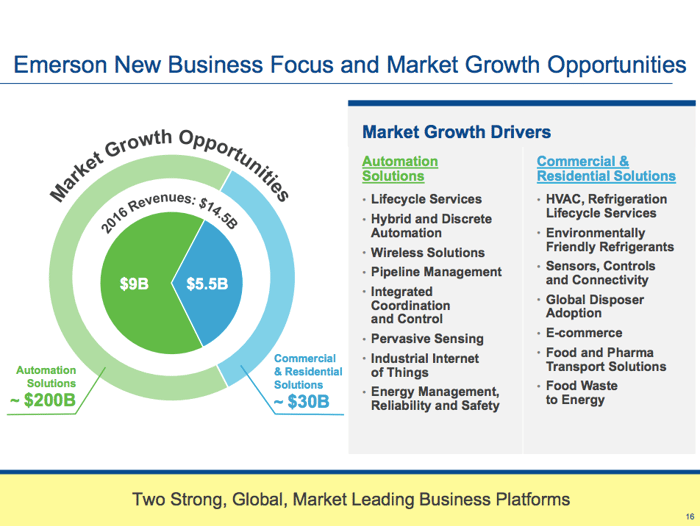 Some recent changes include the sale of Emerson's network power division (which served data centers) and its ClosetMaid business (home organization). It used the proceeds to purchase Pentair's valves and controls business to augment its position in the automation market, where it believes demand will increase in the years ahead.

The most important takeaway here, however, isn't what Emerson does today, but that it actively shifts to address the needs it sees in the market over time.

Then there's the company's finances. Clearly over 60 years there's going to be some ups and downs, and right now the payout ratio is a little troubling. This metric sits at around 85%, which is definitely the high end of the company's historical range. It's a worrying number -- but only if you don't put it into context.

Results over the last few years have been impacted by a slowdown in the typically cyclical industrial sector Emerson serves. The company has also been repositioning its business portfolio. Both have had an impact on earnings. Eventually the payout ratio should come down again, as it has in the past. You'll want to watch this number, of course -- but based on the company's long and successful history, you should give management a long leash. 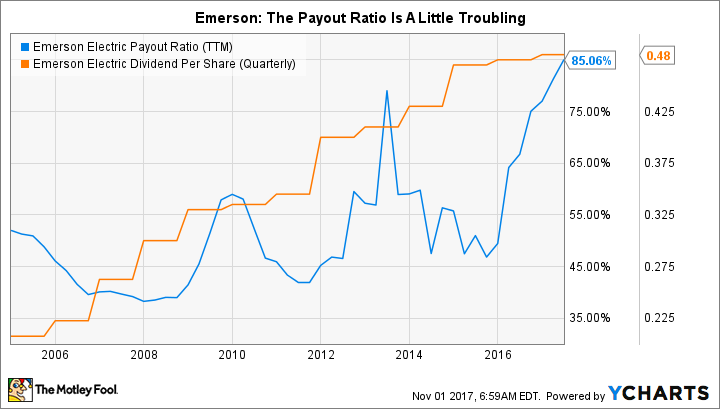 That's doubly important since dividends are paid out of cash flow, not earnings, and cash flow remains fairly robust. For example, fiscal third quarter dividends amounted to a little over 50% of the cash generated from operating activities minus Emerson's capital expenditures (a rough estimate of free cash flow). That's plenty of room to support the dividend.

And the balance sheet remains strong. Long-term debt makes up roughly a third of the capital structure, a completely reasonable number. Meanwhile, the company's current ratio, a measure of a company's ability to pay its near-term bills, is a solid 1.25 times. There's no trouble brewing in the company's financial foundation.

A direct result of the company's relatively weak recent earnings results, however, is slower dividend growth. To give you an idea of what that means, the average annualized dividend increase over the past decade was around 7.4%. The most recent increase was only about 1%. Emerson wants to keep rewarding investors, but it is doing so prudently. That number is likely to pick up when earnings results pick up.

So Emerson's dividend is backed by a company that clearly believes in rewarding investors with regular dividend hikes. Although recent results have been weak on the bottom line, shown clearly in an elevated payout ratio, the company is still generating more than enough cash to cover the dividend. And it has a solid balance sheet. There's really no need to worry about a dividend cut at this point, though slow dividend growth over the near term seems likely to continue.

All of that said, Emerson's yield is toward the high end of its historical range, but Emerson doesn't look like a great bargain today. The company's price to sales ratio, price to book value, and price to cash flow ratios are all above their five year averages. Emerson is at best fairly priced, if not a little expensive. Put this industrial giant on your watch list for a time when you can get a better price, or at least a higher yield, on this longtime dividend grower.