Shares of Teekay Corporation (NYSE:TK), Teekay Tankers Ltd. (NYSE:TNK), Noble Corporation (OTC:NEBLQ), and Ensco PLC (OTC:VAL) finished last month down between 8.6% and 9.7% from where they started. Furthermore, they were all down between 9.6% and 13.5% from their peaks in October. In other words, if you bought shares of any of these stocks near their highs in October, you've probably lost money so far.

So what gives? The interesting thing is that there really wasn't any material news about any of these four companies reported in October.

All four of these companies are heavily tied to oil markets. Teekay and its master limited partnership Teekay Tankers operate vessels that transport and store oil and natural gas and related products, while Noble Corp. and Ensco provide offshore drilling services to oil producers. 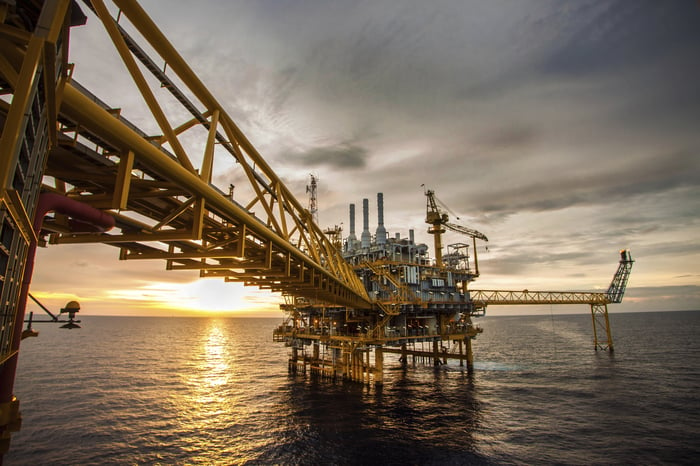 Since oil prices started falling in mid-2016, it's been increasingly more difficult for companies that operate in the offshore oil and gas patch. For drillers Ensco and Noble Corp. and their competitors, it's been especially hard. When the downturn really kicked in during 2015, offshore-oilfield owners began slashing spending for development of new wells.

This has caused a massive amount of disruption in the driller segment, with several major companies filing bankruptcy, almost every other company idling its off-contract vessels to lower expenses, and a huge swath of the oldest drilling vessels being scrapped over the past two years. It has also led to consolidation, such as Ensco's acquisition of Atwood Oceanics, which closed in early October.

For Teekay and Teekay Tankers, the impact has been a little different. The Teekay organization does offer services specific to offshore oil and gas production -- which could be a growth opportunity, as more and more offshore development will be in areas without easy pipeline access. But it also operates a large tanker fleet that transports hydrocarbons from where they are produced or refined to end markets, and this is a low-growth industry that has suffered from overcapacity in recent years.

For offshore drillers Noble Corp. and Ensco, there is evidence that the worst of the downturn may be over. As Ensco reported in its most recent earnings, the number of new contract awards has increased for each of the past five quarters, and Ensco has won more of those contracts than any other offshore driller.

Noble Corp. added $800 million to its backlog in the third quarter, which it announced in early November. The company has managed to keep its backlog of $3.2 billion essentially flat this year, a notable achievement as many other drillers' backlogs have gotten smaller over the course of the year. The company has also managed to generate positive cash flows this year, while its competitors have had to dip into cash reserves and debt to fund operations. 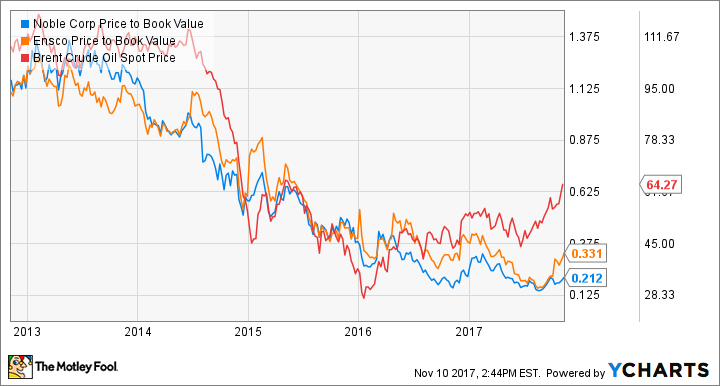 With their stock prices still trading for 21% and 33% of book value, respectively, Noble Corp. and Ensco look like attractive risk-reward investments. Both companies have strong backlogs, have proved attractive partners for producers based on their recent contract awards, and have solid liquidity to help them continue riding out the downturn. Offshore investments are starting to flow again. That should pay off in bigger profits for Noble and Ensco, and huge returns for investors.

Teekay and Teekay Tankers are driven by slightly different dynamics, since their business is more about total demand for the transportation and storage of hydrocarbons around the globe. While there are some potential growth drivers, part of the challenge will be the industry working through an oversupply of vessels in certain segments. Another will be Teekay's ability to take advantage of growth in others, such as vessels that can offtake, process, and transport oil and natural gas produced in remote offshore locations.

Between the two segments, I think there's more potential upside to be unlocked in offshore drilling. It remains one of the most beaten-down segments of the energy industry, and it's possible that it won't fully recover for another year or more. And the advent of low-cost, fast-turnaround onshore shale has decreased the need for offshore spending over the past two years.

But looking at the bigger picture, offshore oil remains one of the biggest and most important sources of oil and gas, and even though offshore projects are very expensive and can take many years to complete, they are hugely profitable when they come online. That should bring money back to the offshore patch eventually, and when that happens, Ensco and Noble Corp. could make for incredibly profitable investments.