Shares of the supermarket operator and supplier tumbled after the company issued its second-quarter earnings report.

Shares of SUPERVALU INC. (SVU) were getting hammered last month after the diversified supermarket chain posted weak guidance in its second-quarter earnings report as it struggles with broader shifts in the industry. According to data from S&P Global Market Intelligence, the stock finished October down 25%. 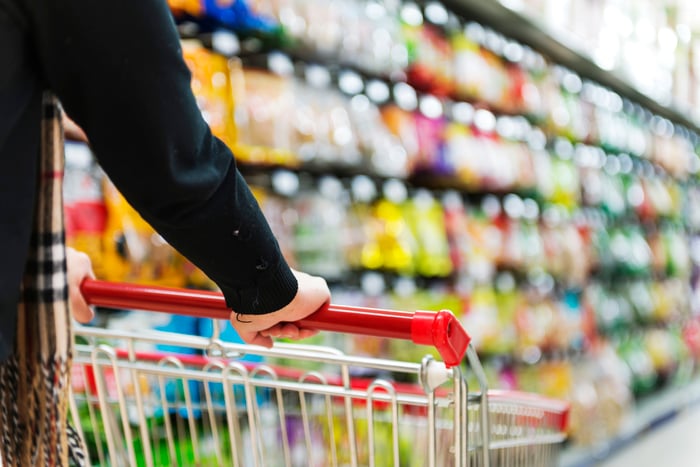 As the chart below shows, the stock was on a downward trend for most of the month, but it plunged on October 18 after the earnings report came out. 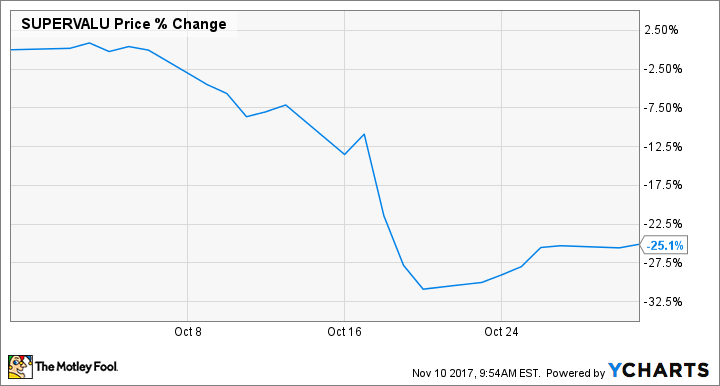 In its second-quarter earnings report, the company's retail division continued to suffer as comparable sales fell 3.5% and overall retail revenue slipped 1.1% to $1.02 billion. Total revenue, including wholesale, jumped 35% to $3.8 billion, helped by its acquisition of Unified Grocers earlier in the year. That beat estimates at $3.75 billion.

On the bottom line, adjusted earnings per share increased from $0.21 to $0.46, ahead of expectations at $0.35. Supervalu shares actually initially rose on the news that morning, but finished down 12% at the end of the session.

Aside from the headline numbers, which were strong, there are still ongoing problems with Supervalu. Without adjustments for an impairment, the company had an operating loss of $25 million, and gross margin narrowed 280 basis points to 11.3% as wholesale makes up an increasing percentage of the company's sales.

Supervalu also announced the $180 million acquisition of Associated Grocers of Florida, bulking up its wholesale business.

Despite the seemingly strong performance in the quarter, Supervalu lowered its full-year guidance for net earnings of $31 million to $50 million, down from $51 million to $70 million. That added to concerns that the business faces increasing challenges as the grocery space gets more competitive with the invasion of European grocers Aldi and Lidl, as well as Amazon's purchase of Whole Foods.

Supervalu shares continued to sell off after the earnings report, and after a brief recovery, they fell again in November. The stock is now down 52% so far this year, and management already implemented a reverse split over the summer. The pivot to wholesale could eventually pay off, but the challenges against the stock continue to be many.