Please ensure Javascript is enabled for purposes of website accessibility
Log In Help Join The Motley Fool
Free Article Join Over 1 Million Premium Members And Get More In-Depth Stock Guidance and Research
By Adam Levine-Weinberg - Nov 13, 2017 at 11:45AM

Ever since Aloha Airlines folded back in early 2008, Hawaiian Holdings (HA -5.97%) has dominated Hawaii's interisland travel market. There have been ebbs and flows over time, but Hawaiian Airlines' market share has routinely exceeded 80% on all of the major interisland routes.

A couple of years ago, Hawaiian's dominance was on the rise. One of its two major competitors pulled out of Hawaii entirely in early 2014. The other (Island Air) downsized its route network significantly in mid-2015 and canceled plans to expand. In 2017, Island Air began to grow again, putting some pressure on Hawaiian Airlines' interisland routes for the first time in several years. However, that changed abruptly last week, as Island Air shut down for good, following an October bankruptcy filing. This has left Hawaiian with a virtual monopoly on interisland travel.

With a population of about 1.4 million, Hawaii is one of the least populous states in the U.S. But because flying is the only practical means of getting between the islands, the main interisland routes are heavily traveled. Indeed, the route between Honolulu International Airport and Kahului Airport on Maui is among the busiest in the U.S.

The interisland business is a key point of strength for Hawaiian Airlines, accounting for roughly a quarter of its $2.7 billion in annual revenue. However, this part of the business has actually been a drag on Hawaiian's unit revenue growth during 2017.

Earlier this year, Hawaiian Airlines added two more 717 aircraft to its interisland fleet, giving it a total of 20. The idea was to enable the company to add capacity at peak times to support demand growth. Unfortunately, the arrival of these aircraft coincided with a growth push by Island Air. As a result, total industry capacity for the interisland market increased 9% in Q1, 14% in Q2, and 13% in Q3. 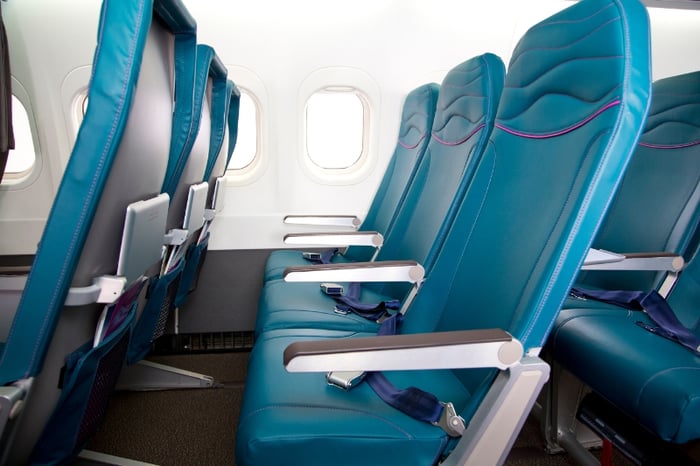 The impact of this growth in competition has increased over the course of the year. During the first quarter, Hawaiian Airlines' interisland unit revenue declined just slightly, but by the third quarter, the carrier posted a high single-digit unit revenue drop for its interisland routes.

Island Air has had a turbulent history. Just in the past five years, it has experienced multiple ownership changes and shifts in strategy. Furthermore, its small size has always hurt its competitiveness relative to Hawaiian Airlines. Island Air's long-running problems finally caught up with it in the past month, as its aircraft lessors have tried to repossess all of its planes.

With the disappearance of Island Air, Hawaiian Airlines now has an effective monopoly in the interisland market. Its one remaining competitor is Mokulele Airlines, which flies nine-seat turboprops. That hardly represents effective competition.

In the short term, Hawaiian Airlines should be able to reverse the unit revenue declines it faced during 2017. It can also use the two extra 717s it received earlier this year to backfill some of the lost Island Air capacity. As a result, Hawaiian Airlines should be able to post strong revenue growth and margin improvement in the interisland market during 2018.

Despite now having a virtual monopoly within Hawaii, Hawaiian Airlines isn't going to implement a massive price increase. Doing so would give Southwest Airlines (LUV -3.41%) a huge opening to enter the interisland market.

Southwest recently confirmed that it will start flying from California to Hawaii in late 2018 or 2019. It is also considering getting into the interisland business.

Yet investors may be overestimating the threat from Southwest. If Southwest Airlines just operates a few flights in the middle of the afternoon between when planes arrive from the West Coast and when they head back, it won't have much of an impact on Hawaiian Airlines.

Alternatively, if Southwest wants to operate a full interisland schedule throughout the day, it will probably need to open a crew base in Hawaii. That would be a highly unusual step for a brand-new destination. As long as Hawaiian Airlines keeps its interisland fares relatively low, Southwest Airlines won't have much incentive to do this.

Thus, Hawaiian Airlines could continue to enjoy a dominant position within Hawaii for the foreseeable future. That will help the company weather the ups and downs in the competitive environment on its other routes.