The tech sector is not known as a great starting point for dividend investors. If you're looking for stock ideas in Silicon Valley, you're supposed to look for extreme growth stocks that have no time for dividend policies.

But that would be a mistake. It's actually easy to find great dividend investments in this industry, and many of them come paired with fantastic growth prospects to boot.

To get you started with income investments in the tech industry, we asked a handful of your fellow investors at The Motley Fool to share some high-yield tech stock ideas. Read on to see what you've been missing in Garmin (NASDAQ:GRMN), IBM (NYSE:IBM), and NVE (NASDAQ:NVEC). 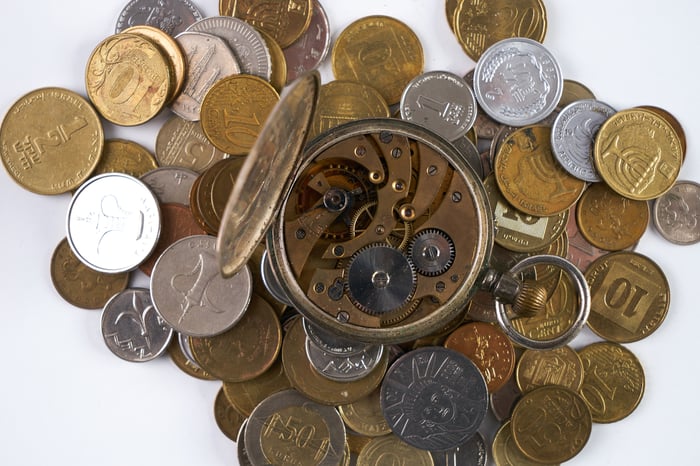 Navigating to a high-yield tech stock

Tim Green (Garmin): If you've heard of Garmin, it's probably from those car GPS systems that smartphones have largely made obsolete. Thankfully for investors, Garmin has quickly diversified its business over the past few years. In 2016, 29% of revenue and 16% of operating income came from the automotive business, down from 44% of revenue and 30% of operating income in 2014.

Garmin's strongest segments are outdoor, aviation, and marine. During the first nine months of 2017, these segments grew revenue by 34%, 15%, and 10%, respectively. These segments include products like dive watches, touchscreen flight displays, and fishfinders. Garmin also makes fitness wearables, although that segment has slumped so far this year.

Garmin is an exceptionally profitable company, with an operating margin of 22.3% in the first nine months of the year. This allows it to pay a $0.51 quarterly per-share dividend, good for a yield of about 3.4%. The automotive business, still the biggest segment, will continue to drag down the company's results, putting a lid on overall revenue growth. But this will become less of an issue as that business shrinks further as a percentage of total revenue.

As far as tech companies go, Garmin isn't very big, valued at just $11.5 billion. But its dividend packs a punch.

Danny Vena (IBM): High-yield and tech might seem like oil and water, but if you look in the right place, you can find just the right mix. Computing stalwart IBM has been paying a dividend consistently for more than a century, and currently sports a hefty 3.9% yield. It also has a healthy payout ratio of 47%, so it has plenty of room to raise that dividend going forward.

IBM has also been aggressively buying back stock, lowing its share count by 17% over the last five years, and so far this year, the company has matched its $4.1 billion in dividends with $3.7 billion in share repurchases.

This yield doesn't come without risk. IBM is in the midst of a multiyear transformation from its legacy business model to one led by its strategic imperatives, which include cloud computing, analytics, mobile software, and cognitive computing -- another term for artificial intelligence.

Big Blue's strategic imperatives were front and center in the most recent quarter, jumping 10% year over year to $8.89 billion and accounting for 45% of total revenue. Cloud revenue jumped to $4.1 billion, up 25% over the prior-year period.

While the company has seen 22 quarters of year-over-year declining revenue, that slide has recently slowed, with some predicting a return to growth as soon as the next several quarters. With a multiple of just 12 times trailing earnings, IBM trades at less than half the market average, so this high-yield tech stock is also a screaming bargain.

This dividend is a fixer-upper with great potential

Anders Bylund (NVE): This is the coolest technology company you've never heard of. The company takes the nanotechnology idea of spintronics, where you measure and manipulate information by electron spin, turning that esoteric concept into commercial products and applications.

NVE, originally known as Nonvolatile Electronics, turns a strong profit right now and only needs to scale up its business ambitions as the spintronics technology evolves. Sixty-five percent of NVE's top-line trailing revenue was converted into EBITDA profits and 44% survived in the form of free cash flow.

It also happens to pay a generous dividend, yielding 4.6% at today's share prices. Now, this is not the perfect dividend stock for all seasons, given the policy's short history and a tendency to dig into cash reserves to fund the quarterly payouts.

But if you see a strong future for spintronic sensors in fields like medical testing and Internet of Things devices, it's easy to imagine a future where NVE's revenue and cash flow gain traction. On top of that, NVE also makes magnetoresistive memory chips, or MRAM, which always stand at the cusp of turning the traditional data storage market upside down.

It wouldn't take much of a growth spurt to let NVE power those dividend checks straight from the incoming cash profits, and there are several potential growth triggers chomping at the bit here. So NVE is not yet a dividend payer for the ages, but perhaps a great income stock for the long term -- we're just entering the dividend story a bit early.