The old Berkshire Hathaway (NYSE:BRK.A)(NYSE:BRK.B) made its money as a risk business, primarily earning a profit from writing insurance policies and earning income from investment gains on the float the insurance operations generated. Fast-forward to today, Berkshire Hathaway is more operating company than financial enterprise.

Its manufacturing, service, and retail segment is the single-largest contributor to its earnings power thanks to several large acquisitions in the past decade.

Many of Berkshire's largest acquisitions are clustered in high-tech manufacturers that make everything from chemicals to specialty airplane parts. While these businesses added only marginally to Berkshire's revenue, their high profit margins result in a disproportionate increase in profit for the Omaha, Nebraska-based conglomerate.

The chart below shows profits from Berkshire's manufacturing, service, and retailing segment over the years. Note the marked increase in profits following the acquisition of IMC (Iscar), Lubrizol, and Precision Castparts, in particular. 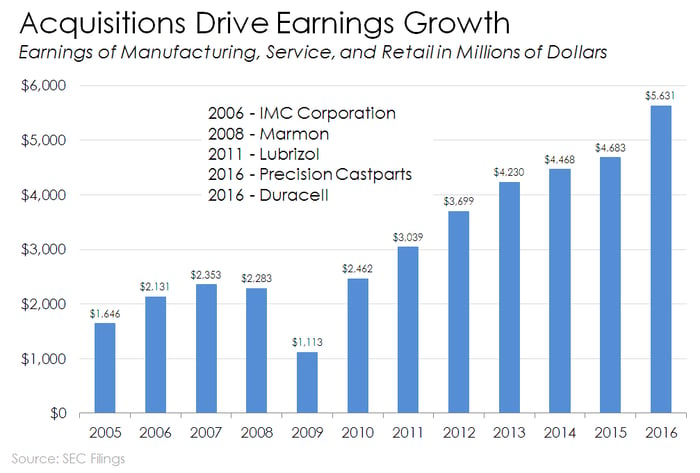 Many of Berkshire's largest manufacturing businesses quickly become internal "roll-ups," using their easy access to the conglomerate's balance sheet to acquire smaller businesses that can be rolled into a larger business. This makes the large acquisitions gifts that keep giving, as the businesses' skilled managers can deploy more of Berkshire's growing pile of cash to make acquisitions at attractive prices.

Buffett calls these little deals "bolt-on" acquisitions. Lubrizol has made several of them, some of which happened just months after joining Berkshire. In 2012, Buffett explained its acquisition outlook shortly after acquiring the company.

Lubrizol will have many opportunities for "bolt-on" acquisitions in the specialty chemical field. Indeed, we've already agreed to three, costing $493 million. James [Hambrick] is a disciplined buyer and a superb operator. Charlie and I are eager to expand his managerial domain.

At times, Buffett has specifically disclosed the size and scope of bolt-on acquisitions in his annual letter to shareholders. His dealmakers were most active immediately following the financial crisis, when Berkshire was adding smaller companies to its roster at a particularly fast pace.

Data source: Berkshire letters to shareholders. *Includes Duracell, which had an inflated valuation due to excess cash at the company.

Some of these deals are small, but some are measured in billions of dollars. In fact, Duracell, which Berkshire acquired for $3.0 billion, net of excess cash, was actually placed under Marmon, making it something of a bolt-on acquisition.

Marmon is made up of "four autonomous companies consisting of fifteen diverse business sectors and approximately 175 independent manufacturing and service businesses," according to the most recent annual report. Duracell thus falls under the "manufacturing, service, and retailing" category in its financial filings. 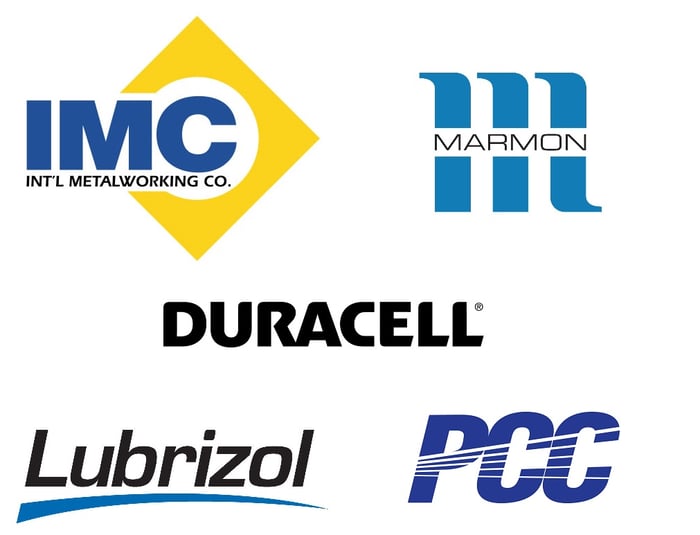 Some of Berkshire's smallest acquisitions have been incredible successes. Berkshire's 2002 acquisition of CBT, an agricultural equipment business, came at a price of $139 million. In the span of a decade, it completed several bolt-on acquisitions, distributed $180 million of cash (net) to Berkshire, and expanded its pretax earnings power to $124 million in 2011.

To be sure, not all bolt-on acquisitions turn out to be winners. Just last year, Lubrizol took a $365 million charge due to the disposition of an underperforming business, which was identified as an oil-field service business acquired from Weatherford International in 2014.

But small businesses enable Berkshire to put some of its capital to work, while leveraging the expertise of managers in charge of its operating units. In his 50th annual letter to shareholders, Buffett explained the attractive nature of small acquisitions:

These purchases deploy capital in operations that fit with our existing businesses and that will be managed by our corps of expert managers. That means no additional work for us, yet more earnings for Berkshire, a combination we find highly appealing. We will make many dozens of bolt-on deals in future years.

As Buffett talks about ways to deploy Berkshire's growing pile of excess cash, history suggests that businesses that fit in the "manufacturing, service, and retail" segment are likely targets, big or small. Together, these businesses produced roughly one-third of Berkshire's net operating profits in 2016.