It's been a tumultuous several months for Shopify Inc. (NYSE:SHOP). Noted short-seller Andrew Left of Citron Research last month hit the company with a scathing short report, charging the company with engaging in illegal business practices. The report caused the stock to fall 21% in the following days. The stock had been on fire this year, gaining 177% before that recent respite.

Investors were looking for assurance from Shopify's management that the charges were baseless and that the company could continue its torrid growth -- and they got just that.

For the just-completed third quarter, Shopify grew total revenue to $171.5 million, up 72% year over year. The company produced an operating loss of $12.7 million, or 7.4% of revenue, compared with a $9.5 million loss, or 9.5% of revenue in the prior-year quarter. Its net loss grew to $9.38 million, a 3% greater loss than the prior-year quarter, resulting in a per-share loss of $0.09, compared with a loss of $0.11 in the same period last year. Shopify produced adjusted operating profitability for the first time as a public company. 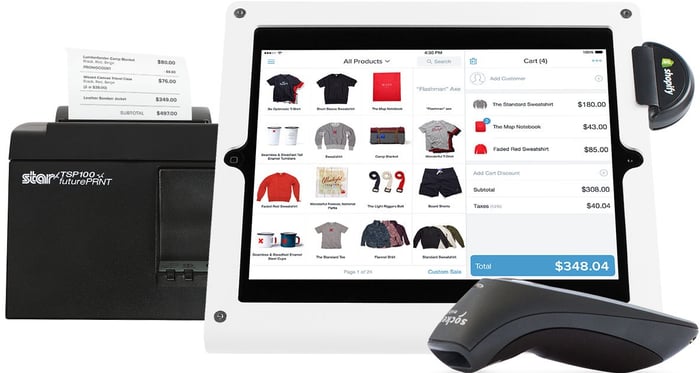 Shopify's performance continues to beat even its own optimistic outlook. Image source: Shopify.

Consistent growth wherever you look

Subscription revenue of $82.4 million jumped 65% over the prior-year quarter, while Merchant Solutions, revenue resulting from payments and shipping, vaulted 79% year over year to $89 million. One of the most important metrics was the increase in monthly recurring revenue (MRR) to $26.8 million, up 65% over the prior-year quarter, which now represents 16% of the Shopify's total revenue. Recurring revenue will provide the company a base upon which to build future gains.

Growth continued across a number of other metrics that illustrate the company's ongoing success. Gross merchandise volume hit $2.6 billion, soaring 69% over the prior-year quarter, while gross payments volume of $2.4 billion increased 39% year over year.

Shopify Capital, the company's working-capital business, issued $44.1 million in cash advances to merchants during the quarter, up nearly 500% from the $9.2 million recorded in the prior year period. Thus far, the company has lent over $130 million since it launched the service in April 2016.

Shopify Plus contributed $5.3 million or 20% of MRR, compared with 15% in the prior-year quarter. This segment of the company's business serves large, enterprise-level customers and is becoming an increasingly important part of its future growth prospects. Shopify Plus achieved a record number of launches in the third quarter, including such well-known brands as Arby's, the Phoenix Suns, and Blue Diamond Growers.

What everyone really wanted to know

The elephant in the room was, of course, the allegations made in the short report. CEO Tobias Lutke immediately addressed the issue on the company's conference call:

We were targeted by a short-selling troll who made all sorts of preposterous claims. ... I want to correct three key points of misinformation, and just to be absolutely clear, we consulted with outside legal counsel that also categorically dismissed these claims as unsubstantiated. I can definitely state that (1) we do not sell business opportunities; we sell a commerce platform; (2) we comply with FTC rules and consistently inform our affiliates of their legal obligations; and (3) we do not promise merchants success -- far from it. In fact, most of our content is about how hard entrepreneurship is.

Lutke's response should give investors some assurance that the most serious claims made by the short-seller were without merit.

Lutke shared during the call that a new merchant makes a sale on Shopify every 90 seconds, and just last quarter the company announced that it had exceeded 500,000 merchants on its platform.

The trend to e-commerce is undeniable and growing. According to the U.S. Department of Commerce, e-commerce represents just 8.2% of total retail sales, up from 3.5% just a decade ago. As more and more merchants make the move to online sales, they will seek out the best platform they can find to facilitate their endeavors. Shopify is providing the merchants of the future with the tools they need to succeed online, and the company and its investors will probably continue to prosper.