Shares of Adobe Systems (NASDAQ:ADBE) climbed 17.4% in October, according to data from S&P Global Market Intelligence, after the creative-software leader introduced encouraging financial targets for its upcoming fiscal year.

For perspective, Adobe most recently announced strong fiscal third-quarter 2017 results (for the quarter ended Sept. 1, 2017) in mid-September, easily exceeding its guidance at the time thanks to record revenue from its cloud-based subscription products. Last month, however, Adobe stock popped nearly 12% in a single day after it revealed goals for fiscal 2018 at an investor meeting during its annual Adobe MAX user conference. 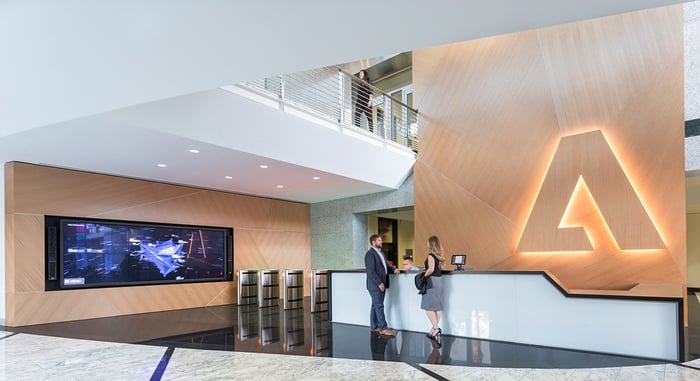 More specifically, Adobe first reiterated its fourth-quarter 2017 guidance for adjusted earnings of $1.15 per share on revenue of $1.95 billion. Then it told investors to expect fiscal 2018 revenue of roughly $8.7 billion, good for growth of 20% from fiscal 2017, which should result in GAAP earnings per share of $4.40 and adjusted (non-GAAP) EPS of $5.50. Both its top- and bottom-line targets for the coming year were well above Wall Street's models at the time, which called for revenue of $8.68 billion and adjusted earnings of $5.21 per share.

Adobe expects cloud solutions to lead the way once again next year. Its new outlook assumes 20% growth in both bookings and subscription revenue for Adobe Experience Cloud, as well as an incremental $1 billion of net new digital media annualized recurring revenue.

To be fair, it might seem surprising at first that Adobe was confident enough to offer this information so early -- it won't report fourth-quarter earnings for roughly another month, after all. But investors rightly trust that its goals are achievable precisely because of the relative predictability of that recurring revenue, as well as Adobe's recent habit of under-promising and over-delivering in any given quarter.

So with Adobe stock up nearly 80% so far in calendar 2017 as of this writing, I think patient, long-term investors have every reason to celebrate those gains and continue looking forward to the future.