Please ensure Javascript is enabled for purposes of website accessibility
Log In Help Join The Motley Fool
Free Article Join Over 1 Million Premium Members And Get More In-Depth Stock Guidance and Research
By Chris Neiger - Nov 18, 2017 at 10:11AM

Overspending, credit card debt, parking lot fights, and the erosion of the Thanksgiving holiday -- what's not to love?

Nearly two-thirds of American shoppers plan to get up early (or stay up late) and brave huge crowds in order to scramble for the best holiday gift deals on Black Friday and throughout the holiday weekend. Some shoppers simply love the thrill of getting a good deal or finding that perfect gift for their loved ones.

But, of course, there's a dark side to Black Friday well. Parking lot fights, stampedes, overworked employees, and increased debt are ugly hallmarks of the American holiday shopping season. If you have an inclination to spend your post-Thanksgiving hours scouring retail shelves for this year's hottest gifts, here are four Black Friday stats that might make you think twice. 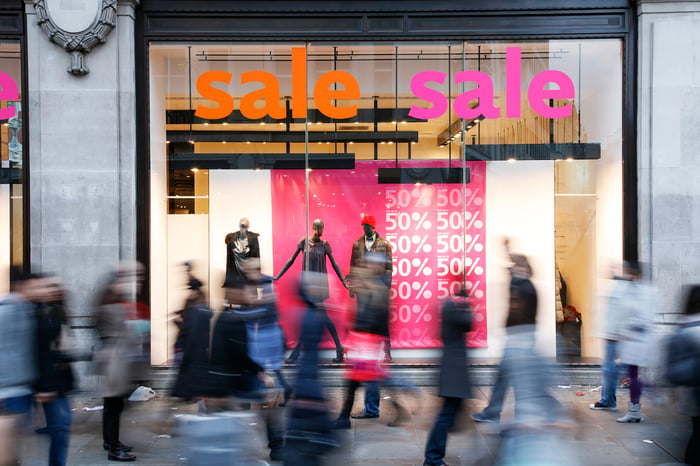 1. 40% of Americans bust their budget looking for great deals

The time between Black Friday and Christmas brings in about 30% to 40% of annual sales for many retail companies, according to the National Retail Federation (NRF). This year, holiday retail sales are expected to reach up to $682 billion, up from $655.8 billion in 2016.

All of this spending provides a nice boost to the economy, of course, but it also comes at the expense of many consumers' personal budgets. About 40% of shoppers overspent on holiday gifts last year, according to a survey conducted by Elevate's Center for the New Middle Class.

While it's not exactly shocking that many Americans spent more than they were planning to, it is surprising why they did it. According to the survey, shoppers were 45% more likely to overspend when they were actually looking for great deals.

Perhaps seeing more sales enticed them to spend more money, or buying lots of gifts to maximize perceived savings was the culprit. Either way, many Americans bust their holiday shopping budgets for the sake of a good deal -- and that's bad news for their personal finances.

2. 25% of shoppers will need three months to pay off holiday debts

While spending more than we want on holiday gifts isn't good, what's worse is that one-quarter of American shoppers spend so much on Black Friday (and over the holiday season) that it takes us three months to pay it off, according to 2016 survey by TD Bank.

Think on that for just a second; it takes 25% of Americans one-quarter of a year to pay off holiday debts. And don't think it's just shoppers with subprime credit that are having problems. A recent Goldman Sachs survey showed that Americans with credit scores of 660 or higher struggle with credit card debt too.

Americans now have more than $1 trillion in outstanding revolving credit card debt, some of the highest since the Great Recession days back in 2008. And consumers say they'll spend about $967 on holiday shopping this year, up from about $935 in 2016. All of which means Americans aren't likely to give up their tradition of accumulating more holiday debt just yet.

Even with rising online sales, nearly 102 million Americans went out for Black Friday deals last year, a huge increase from 74 million the year before.

Unfortunately, some shoppers occasionally turn violent during the intense shopping times. A Black Friday shooting in a New Jersey mall last year left one man dead and his brother injured, and another shooting the same day in a Memphis, Tennessee mall left another man dead. If that weren't bad enough, two men began shooting at each other in a Wal-Mart parking lot last year as they fought over a parking space, and one of the men died from his injuries.

According to the depressingly named website, www.blackfridaydeathcount.com, 10 people have died on the popular shopping day and more than 100 have been injured since 2006 due to shootings, stampedes, robberies, and fights.

While most of us get to to enjoy a day off with family and friends, many retail worker have to cut their Thanksgiving holiday short and clock-in for work. About 75 popular retail stores will be closed on Thanksgiving, but many stores including Best Buy, Cabela's, JCPenney, Target and Wal-Mart will be open for at least part of the day.

Sure, employees usually get paid more on Thanksgiving because it's a holiday, but as many of us already know, getting paid more money isn't always worth the work. And staying open on the Thanksgiving holiday only feeds America's growing problem of taking less vacation time than workers in other countries.

You don't have to give up holiday shopping completely this year, but you can avoid some of theses cringe-worthy statistics with some simple changes to your shopping habits.

The first, and most obvious, is to avoid shopping on Black Friday. There's plenty of evidence showing that you can get great deals over the entire holiday shopping season. Second, make a budget. Shoppers that don't set a budget are 87% more likely to say they spent more than they planned on, compared to those who set a limit.Finally, remember that while it's fun to give gifts, going into debt for them simply isn't worth it.