One way to better understand a company's strategy is to look at management's incentives embedded in the company's compensation agreement with its CEO. Typically, companies pay a base salary to the CEO but give bonuses and stock awards on top of that for accomplishing certain financial targets, and some companies even reward CEOs if the stock delivers a certain minimum return over a specific period.

Depending on how leadership is incentivized can have dramatic effects on investors' return over time. We're going to take a look at the incentives in Take-Two Interactive's (NASDAQ:TTWO) compensation agreement with CEO Strauss Zelnick to better understand the video game maker's strategy, which could give us clues about Take-Two's future plans. 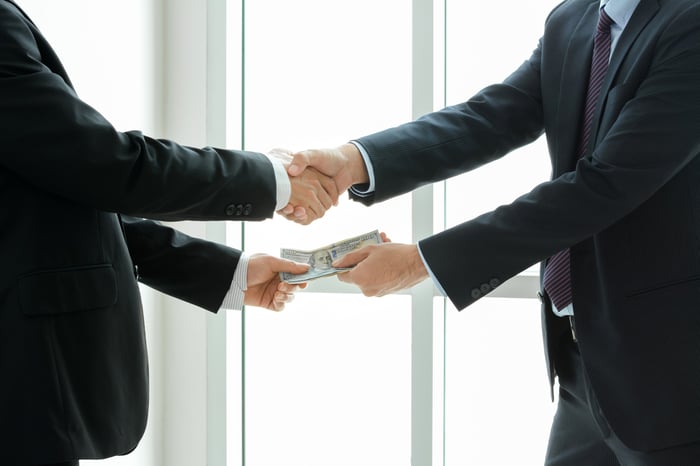 What is Take-Two's CEO incentivized to accomplish

Take-Two CEO Strauss Zelnick is not directly compensated by Take-Two, but by ZelnickMedia -- a firm run by private equity investors, including Zelnick, that focuses on the media and communications industry. According to Take-Two's 2014 Management Agreement, Zelnick receives no more than 60% of the compensation paid to ZelnickMedia. For fiscal 2017, ZelnickMedia received total compensation of $16,322,000 through a combination of restricted stock awards and a base management fee.

Take-Two's compensation plan incentivizes CEO Strauss Zelnick to do two things. First, meet a certain threshold annually for adjusted earnings before interest, taxes, and depreciation (EBITDA) -- a metric that is commonly used as a proxy for operating cash flow. Second, deliver a total shareholder return over a two year period that outperforms the NASDAQ Composite Index.

The maximum threshold for the annual adjusted EBITDA target in fiscal 2017 was $314.3 million. Take-Two's actual adjusted EBITDA was $336.1 million, as the game maker's Grand Theft Auto franchise continued to deliver strong sales and the company's digital distribution strategy continued to generate healthy profits from in-game purchases. This achievement awarded ZelnickMedia $4,752,000 on top of the fixed annual management fee of $2,970,000.

The balance of ZelnickMedia's $16.3 million in compensation was from a combination of time-based and performance-based awards of restricted stock units which vest at a later date. Time-based awards are designed to encourage consistent employment among Take-Two's executives and avoid turnover, which can lead to poor business performance. 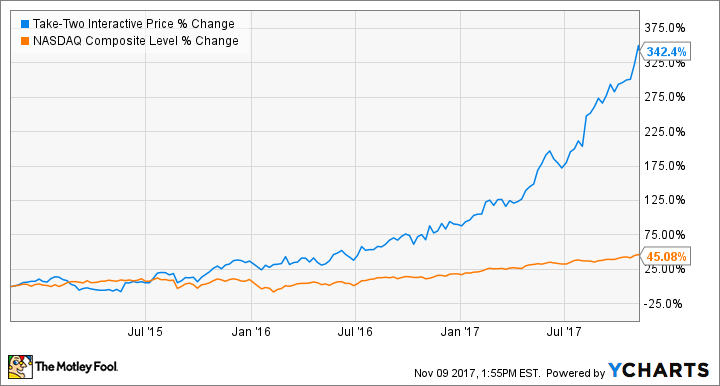 Let's now take a look at Take-Two's strategy in recent years in light of these incentives.

Here's how these incentives have influenced Take-Two's strategy

The current measurement period for total shareholder return began on April 1, 2016, and ends on March 30, 2018. Take-Two's stock is up 200% since the beginning of this period compared to the NASDAQ return of 37%. Fueling investor's optimism has been the ongoing push into digital distribution of games and the subsequent steady stream of in-game content which gamers purchase while playing. This higher margin, digital strategy has grown adjusted EBITDA, cash from operations, and net income over that time, which has fueled the ascent in the stock price.

We can also see how the portion of performance-based awards tied to new game sales and game sequels has influenced management's strategy with respect to game development. Take-Two hasn't released any groundbreaking new franchises in recent years since Red Dead Redemption in 2010 and L.A. Noire in 2011. Most of its sales have been based on strong sales of new versions of existing franchises, with the biggest sellers being Grand Theft Auto V and NBA 2K.

This focus on game sequels is consistent with management's strategy to focus investment on the titles that offer the best return on investment, which fits Zelnick's incentive to grow adjusted EBITDA and, in turn, provide an impetus for a growing stock price over time.

Another way Zelnick is trying to grow the company's profits is by pursuing new growth opportunities in esports, as well as promising new ventures in mobile games with the recent acquisitions of mobile game maker Social Point, and the maker of the hit PC game, Kerbal Space Program.

Take-Two's recent success has given management more than $1 billion in cash on the balance sheet to potentially make additional deals, which should lead to a more diversified, profitable Take-Two in the future.