Long-term shareholders of Intuit (NASDAQ:INTU) probably won't be surprised to learn that the company's fiscal first quarter of 2018 earnings were propelled by the continuing surge in new QuickBooks Online (QBO) subscribers. Let's begin our review of this traditional tune-up quarter to tax season by scanning the summary numbers: 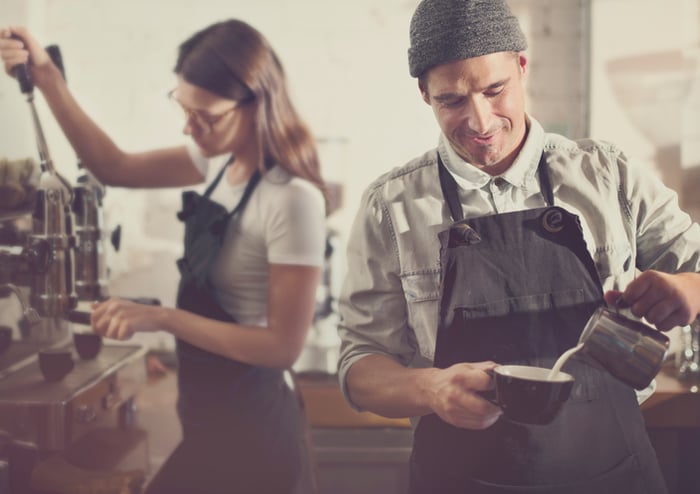 One of the most interesting portions of Intuit's earnings call with analysts focused on the upcoming launch of "Turbo," a platform that integrates TurboTax with Intuit's personal-finance program Mint. The platform gathers a user's IRS-verified income, combines it with credit score data obtained through Mint, and with permission, forwards summary data in an anonymized format to various lending and finance partners.

For the consumer, the Turbo platform can potentially result in attractive offers from finance companies for both revolving loans like credit cards, and long-term auto and mortgage loans. For Intuit, it opens up a deeper relationship with TurboTax customers. CEO Brad Smith made the following comments about Turbo during the company's earnings conference call:

Turbo [is] the first step toward expanding beyond a tax offering to a consumer platform. This platform will improve the overall financial health of the end-user. Turbo goes beyond a credit score and unleashes the power of verified IRS-filed income, the credit score and the debt-to-income ratio to show customers who give consent where they truly stand. We announced an exciting slate of initial partners who will use the platform to provide offerings for participating customers starting early in calendar 2018.

Smith also pointed out that the company typically has two interactions with TurboTax customers a year versus 112 interactions for the typical Mint customer. If successful, the platform could create new revenue opportunities for Intuit through much higher engagement with tax customers.

Despite promising earnings at the outset of the year, Intuit didn't raise its full-year fiscal 2018 earnings guidance. This is because the organization expects some moderation of its small business ecosystem growth in the back half of the year. Last tax season, Intuit benefited from a popular bundling of QuickBooks Self-Employed with TurboTax, which will make comparisons a bit more difficult in 2018.

Looking ahead to next quarter, Intuit is forecasting revenue growth of between 14% and 16% for a total top-line range of $1.160 billion to $1.180 billion, and projecting that diluted earnings per share will land between $0.08 and $0.11. Shareholders may remember that tax season started quite slowly for Intuit last year -- apparently, management is expecting the opposite for 2018.