Please ensure Javascript is enabled for purposes of website accessibility
Log In Help Join The Motley Fool
Free Article Join Over 1 Million Premium Members And Get More In-Depth Stock Guidance and Research
By Daniel B. Kline - Nov 21, 2017 at 7:45AM

The holiday season, specifically Black Friday, may show that brick-and-mortar retailers still have a future. That may not fit the "retail apocalypse" narrative, but shoppers clearly have not given up on the idea of actually visiting physical retailers.

The numbers also look good for traditional retail on Saturday when the same report shows 52% of those planning to shop will head to stores while only 24% plan to shop online. That number is also down from last year's 36%.

"Store retailers will have shoppers' attention with the overall excitement of the day and tradition of shopping with friends and family," said Deloitte Vice Charmian Rod Sides in a press release. "That's a tremendous opportunity to elevate the customer experience and create a strong rapport to drive sales." 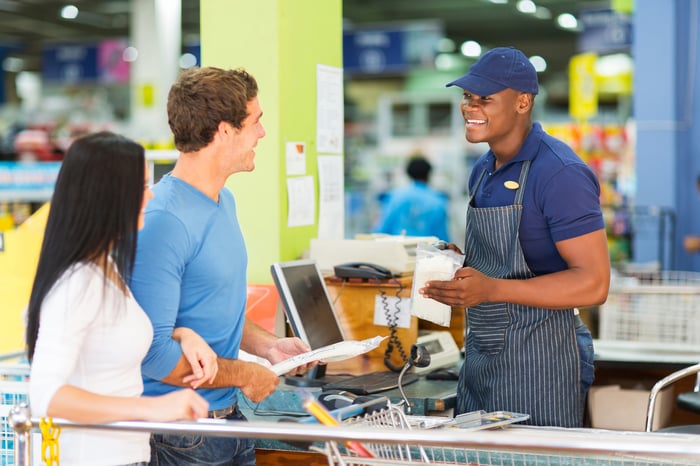 It's not all good news for brick-and-mortar

Of course, just because the most-dire "retail is dead" predictions may not be true does not mean that physical retailers have nothing to worry about. Deloitte also found that while shoppers do plan to turn out at stores, specifically on Black Friday, they still expect to spend 52% of their holiday budget online while spending only 46% in physical stores.

It's worth noting that what people expect to spend online does not reflect historical averages or credible predictions for overall 2017 spending. In reality, while digital sales have been climbing, brick-and-mortar purchases still dominate.

During the 2017 holiday season, online sales are expected to reach $107.4 billion, according to data from Adobe (ADBE 2.17%) Analytics. That's a 13.8% increase over 2016. Brick-and-mortar sales will be up 10%. When you balance that number against the National Retail Federation's (NRF) prediction of between $678.75 billion and $682 billion in total November and December sales, you see that Americans still spend over $5 in stores for every $1 they spend online.

It's, of course, possible that one of two things skew Deloitte's data. First, people may simply have the wrong impression of how they actually spend their money. Second, since the survey of 1,224 adults over 18 was conducted online, that group may spend more online than consumers surveyed over the phone or at a booth in the mall.

Still, the fact that a group of people surveyed online actually plans to head to stores on Black Friday (and to a lesser amount on Saturday) bodes well for stores. In addition, Deloitte is not alone in offering data that shows that brick-and-mortar chains will at least have a chance to earn their piece of the holiday pie.

RetailMeNot (SALE) also conducted three online surveys of 1,000 U.S. consumers over the age of 18. It found that "87% of consumers plan to visit a physical retail store in the month of December, and on average, they plan to do so seven times."

What does this mean for retailers?

While digital is gaining, omnichannel (offering consumers a mix of digital and physical shopping) brick-and-mortar chains still have a chance. Consumers are visiting stores and as long as they do that retailers get a chance to capture some of their spending.

Exactly how much of each consumer's holiday budget will go to physical stores likely depends upon user experience. Give customers what they want at competitive prices and a brick-and-mortar store has an edge over a digital player once the consumer has entered the store. That's an edge it's easy to give away, but at least for 2017, malls, department stores, and other real-world retailers will still have their opportunity to earn holiday sales.