Wednesday was a quiet day for the stock market, with major benchmarks seeing relatively little movement overall in advance of the day off that investors will get for Thanksgiving. With Congress on break for the holiday week, further action on the political front will pause until Monday, and a lack of major macroeconomic news meant there were no big catalysts to drive significant market moves. Still, a few companies suffered from bad news that sent their shares downward. Hewlett Packard Enterprise (NYSE:HPE), Qudian (NYSE:QD), and Movado Group (NYSE:MOV) were among the worst performers on the day. Below, we'll look more closely at these stocks to tell you why they did so poorly.

Shares of Hewlett Packard Enterprise fell 7% after CEO Meg Whitman surprised investors by announcing that she will resign from her position as of Feb. 1. The move arguably shouldn't have shocked shareholders as much as it did, given that Whitman had initially set out a five-year turnaround plan when she was named to the chief executive role in late 2011. Antonio Neri is set to take over as CEO come early 2018, but the move raises major concerns about the future strategic direction for the HP spinoff. Whitman will remain on HP Enterprise's board, but some of those who follow the stock were disappointed given comments earlier in the year that had suggested continuity in the CEO role -- at least in the near term. 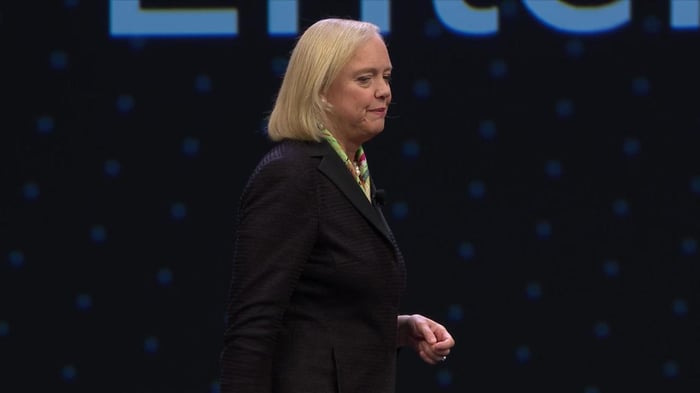 Qudian stock plunged 16%, marking the second straight day of declines in the wake of new regulation from the government in China. The Chinese consumer credit provider had seemed to be doing well, with solid revenue and earnings growth in its most recent quarterly report last week. Yet a decline on Tuesday came from rumors of potential oversight, and confirmed news that local governments in China were directed to stop providing licenses to new entrants to the microloan business showed the level of antipathy in Beijing toward companies like Qudian. With internet finance squarely in China's crosshairs, Qudian could have trouble maintaining its momentum going forward.

Finally, shares of Movado Group fell 8%. The move essentially reversed the gains that the watchmaker had enjoyed yesterday following favorable third-quarter financial results. Movado had raised its guidance for revenue and earnings for the full 2018 fiscal year, and many investors had anticipated that the company might be able to build momentum heading into the key holiday shopping season. Yet with shares having jumped by a third just since August, Movado investors seemed ready to take a break and wait for initial results from Black Friday before becoming too confident in the company's future.