Consumer electronics are some of the biggest ticket items during the holiday shopping season, and this year, 4K Ultra HD TVs are likely to top the list for many buyers. The problem is that these televisions are typically expensive items, and finding the best deals isn't always easy.

But fear not. Here's a quick list of some of the best Black Friday deals for 4K Ultra HD televisions that will be perfect for nearly every budget -- and that will save you $200 or more on your purchase. 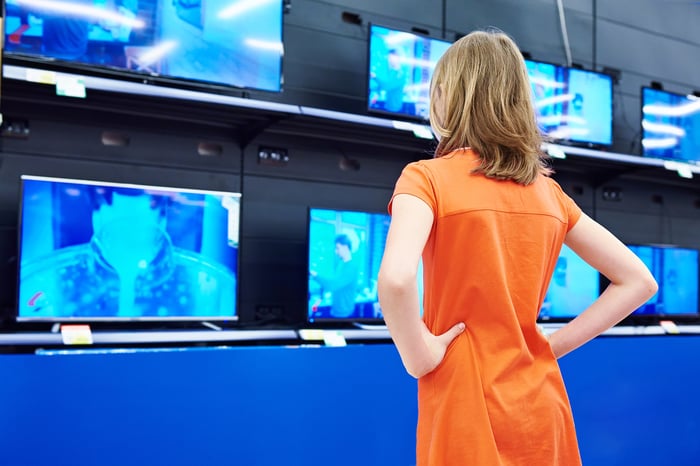 Best Buy has some of the best Black Friday TV deals this year. The first one is Sharp's 50-inch LED 4K Ultra HDTV. The original price is $500, but you can get it on Black Friday for just $180, leaving you with a net savings of $320. That's a nearly unbeatable price, and the TV even comes with Roku's video streaming software built right inside and has a 4.6-star rating (out of 5) on Best Buy's website.

The big-box retailer is also selling the slightly bigger 55-inch Toshiba 4K UHD TV smart TV for just $280 starting on Thanksgiving Day. Consumer Reports said it tested this model and it has "very good HD picture quality and UHD performance," built-in Netflix, YouTube, Hulu, and HBO services (subscriptions sold separately), and is $170 cheaper than its usual retail price. OK, that's not quite a $200 savings, but it's still really close and it's too good of a deal not to mention.

For a little bit more money, you can get the 55-inch Samsung 4K UHD smart TV at Kohl's for $500. That's a $200 discount for Black Friday, but keep in mind that this is a "doorbuster" deal, so it's likely to go fast. The TV comes with access to Netflix, YouTube, Amazon Prime Video, Hulu, and HBO.

If you want to go even bigger, and a lot more expensive, then check out the 60-inch Sony LED smart 4K Ultra HDTV that Best Buy's selling for $600. The TV is a whopping $400 below its original price, has a 4.6-star rating on Best Buy's site, and has YouTube, Netflix, and Hulu access built right into the TV (you'll still have to pay for the subscription services, of course).

Best Buy has plenty of other Black Friday TV deals as well. Just keep in mind you'll have to physically go the store to get your hands on these TVs. Both Kohl's and Best Buy open their doors at 5 p.m. on Thanksgiving Day, and Best Buy will open at 8 a.m on Friday morning, while Kohl's hours will vary by location.

These aren't the only 4K TV deals on Black Friday, of course, and there are plenty of other deals that you can get without having to go into a store. Those deals are harder to list here because the inventory can change so quickly and also because the prices can fluctuate. So if you're in the market for a TV and you don't want to brave the Black Friday crowds, then make sure you compare online retail prices throughout Black Friday and over the weekend. Sometimes online sellers will react to their competitors' deals in real time, which means you could end up with the best TV deal without having to leave your home.