Cryptocurrency has got to be the biggest financial news story of 2017, thanks to the meteoric rise in prices for the digital currencies that use cryptography for security and operate independently of a centralized bank. The price of bitcoin, the oldest and largest cryptocurrency, has soared 760% so far this year to $9,880, as of Nov. 27. Ethereum, the second-largest crypto, has risen even more.

Though it doesn't make for as sexy headlines, the even bigger story is blockchain. Blockchain is the digital and decentralized public ledger that underlies most cryptocurrencies, and it has a potentially wide range of applications in the financial services industry and beyond.

Investments in the crypto/blockchain space that have more than doubled so far in 2017 include Bitcoin Investment Trust (OTC:GBTC), online retailer Overstock.com (NASDAQ:OSTK), and graphics-chip specialist NVIDIA (NASDAQ:NVDA).

Below is a look at each of these investments, with an eye toward answering the question: Do any of them look like promising investments? 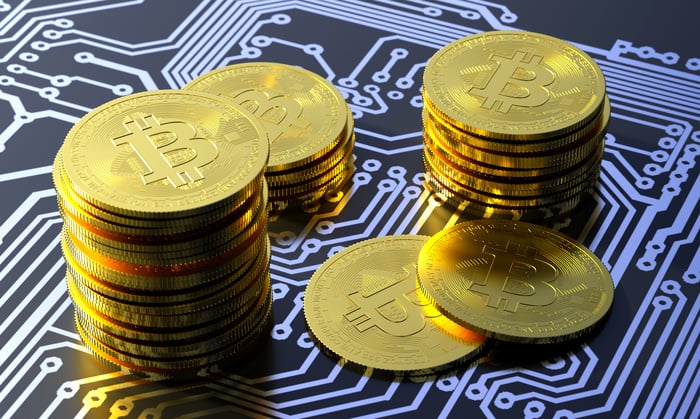 Bitcoin Investment Trust: A pure play with a 993% year-to-date gain

Grayscale's Bitcoin Investment Trust -- nearing a whopping 1,000% gain so far in 2017 -- became the first publicly quoted security solely invested in and deriving value from the price of bitcoin when the fund launched in September 2013. The fund is a more mainstream way for investors to invest in the virtual currency than doing so on a bitcoin-specific decentralized exchange.

Relative to decentralized exchanges, going this route should provide some improved visibility and safety, and maybe liquidity. (The fund trades over the counter in the U.S., and is rather lightly traded, with about 49,000 shares trading hands on Nov. 27.) You can also hold the security in a tax-advantaged account, as you can stocks. That said, you'll have to pay up big for any benefits and potential benefits, as the Bitcoin Investment Trust sports a huge premium. As of Nov. 27, the price of one share of the fund is 51% higher than the price of the bitcoins held per share. We can attribute this premium -- which many investors probably don't realize they're paying -- to demand for fund shares considerably outstripping supply.

Verdict? Paying such a gigantic premium relative to buying bitcoin on a decentralized exchange doesn't seem to make good sense. Moreover, buying bitcoin in general -- regardless of the method -- is risky. Its price could continue to go ballistic for some time, but it could also plummet as fast as it's risen. Only investors with very high risk tolerances and money to lose should be investing directly in bitcoin, or any cryptocurrency for that matter. 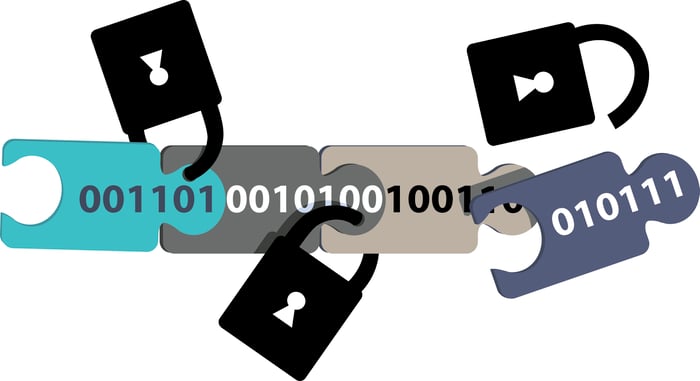 Overstock: An emerging play on blockchain sporting a 237% YTD gain

Overstock operates as a discount online retailer, so it's not a pure play on cryptocurrency or blockchain. In 2014, Overstock became the first major retailer to accept bitcoin, and in August it notched another first for a major retailer when it began accepting all the other newer major digital currencies, including Ethereum, Bitcoin Cash, Litecoin, Dash, and Monero. But the reason it's considered a "blockchain stock" is because of its majority-owned subsidiary, tZERO, which has been building the company's blockchain-based system for securities transactions. Overstock's wholly owned Medici Ventures subsidiary manages the company's tZERO project, and also invests in other blockchain technologies.

Many in the financial services world are excited about the potential for blockchain to increase the efficiency and security of financial transactions, which is why investors have been ferociously bidding up shares of Overstock in recent months. Blockchain is a digital and decentralized ledger for recording transactions, so it cuts out the need for an intermediary, like a bank, which should lower transaction costs. And blockchain's open-source nature should significantly reduce the risk of financial crimes stemming from people tampering with recorded data.

Verdict? It makes sense that investors have bid up shares of Overstock, to a degree, to include the potential benefits the company might see from its entrance into the blockchain space. That said, the key words here are "potential" and "might" -- so most investors should give very heavy weight to how much they like Overstock's core online retail business when making their investment decisions. 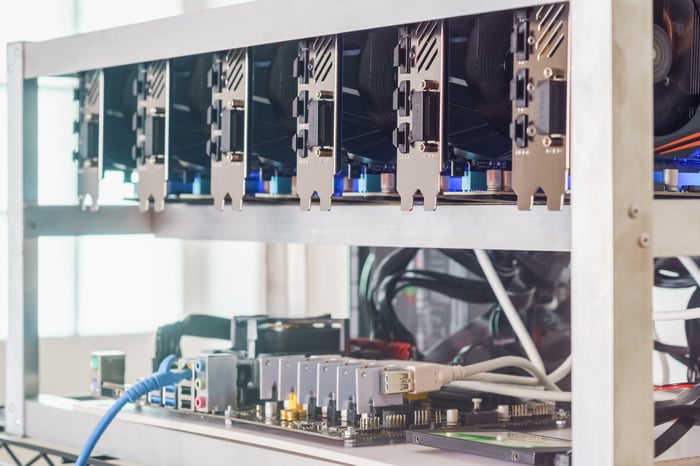 NVIDIA: A pick-and-shovel play with a 101% YTD return

Like singer Vanessa Williams, I saved the best for last: Graphics-chip maker NVIDIA -- which makes graphics cards that are used to "mine," or generate, digital currencies -- is the best way for most individual investors who don't have sky-high risk tolerances to invest in the cryptocurrency/blockchain space. NVIDIA's cards are no longer considered ideal for mining bitcoin because once the granddaddy of digital currencies got large enough, application-specific integrated circuits (ASICs) were built to mine it. But they remain a top choice for mining Ethereum and other emerging digital currencies.

NVIDIA's financial performance has been stellar over the last year, with its third-quarter revenue jumping 32% and non-GAAP, or adjusted, earnings per share (EPS) surging 41% from the year-ago quarter. Moreover, the company has solid long-term growth potential stemming from its core computer gaming business, and from fast-growing emerging tech trends like artificial intelligence (AI) and driverless vehicles. So NVIDIA's cryptocurrency business can be viewed as icing on the cake.

In the second and third quarters of fiscal 2018, NVIDIA generated north of 6.7% and 2.7%, respectively, of its total revenue from selling graphics cards for mining digital currencies. That's the best breakdown the company can provide because it can't know how many people are buying its GeForce GTX cards, which are made for gaming, to use for mining cryptocurrency. The percentages I mentioned are derived from sales of the application-specific graphics boards it makes for mining.

NVIDIA is not a good choice for investors who want something closer to a pure play on cryptocurrency or blockchain. But it has two big things going for it: Its non-crypto business has great potential, and its cypto business shouldn't be dependent on the performance of one single virtual currency.

3 Cryptocurrency and Blockchain Stocks That Have Doubled (or More) in 2017 -- Are Any Buys? @themotleyfool #stocks $NVDA $OSTK $GBTC Next Article
Current