Jeremy Bowman, Daniel Miller, and Danny Vena
(TMFHobo)
Author Bio
Fool since 2011. I write about consumer goods, the big picture, and whatever else piques my interest. Follow me on Twitter to see my latest articles, and for commentary on hot topics in retail and the broad market. Follow @tmfbowman

It's no surprise that Verizon Communications (NYSE:VZ) is one of the most popular dividend stocks on the market. The telecom giant is one of the 30 components of the Dow Jones Industrials, and hails from a defensive sector, well-known for paying generous dividends and weathering recessions.

With a 5.3% dividend yield, Verizon's payout is nothing to sneer at, but investors can find better yields elsewhere if they know where to look. Below, three of our analysts explain why think Imperial Brands (OTC:IMBB.Y), Iron Mountain (NYSE:IRM), and AT&T (NYSE:T) may be better choices for dividend investors. 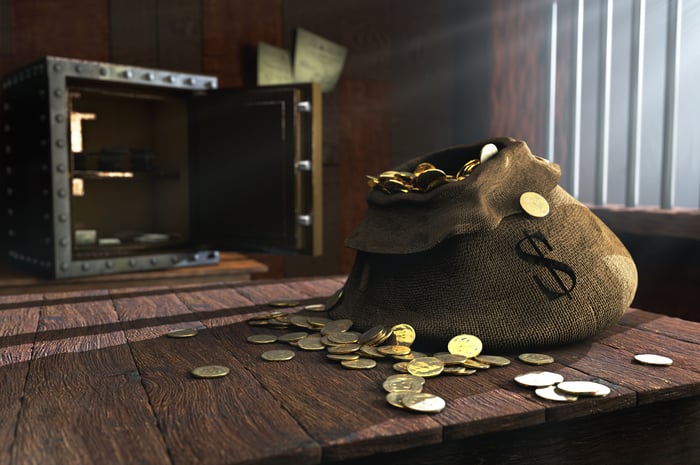 Daniel Miller (Imperial Brands): Owning shares of a company such as Imperial Brands, one of the world's largest tobacco players, can generate serious income for investors even if you don't use or endorse their products. While its quarterly payments vary, as you can see here, its yield of 5.81% is certainly enticing.

For Americans it's easy to be bearish on tobacco companies as the number of U.S. adults smoking continues to decline, but there is plenty of global growth remaining. Imperial has exposure to some of the biggest and most lucrative markets in the world, and a couple advantages. One is that Imperial Brands is the leader in Cuban cigars, which could be a boost to its financials as relations between the U.S. and Cuba slowly improve.

Another benefit has been the progress of plain-packaging legislation in countries around the world. The goal of these laws is to require tobacco packaging to be uniform in color and presentation, without branding, logos, or other promotional elements. While plain packaging will reduce demand, as intended, Imperial is known for its value brands and wouldn't suffer as much as larger competitors powered by more recognizable brands.

Finding a company dishing out a dividend yield higher than Verizon isn't easy. However, Imperial Brands offers a solid dividend with global growth prospects, potential catalysts, and competitive advantages that make it worth considering when looking for income stocks.

A mountain of dividends

Danny Vena (Iron Mountain): Iron Mountain may not be a household name like Verizon, but the company is the global leader in records storage and information management solutions. It occupies more than 85 million square feet of space in the 1,400 facilities it operates, in 53 countries around the world. The company counts 95% of the Fortune 1000 companies as clients, and has a total of 230,000 organizations as customers worldwide.

Those customers tend to stick around. A full 50% of the boxes Iron Mountain stored 15 years ago are still stored today.

Iron Mountain operates as a real-estate investment trust (REIT), which requires it to pay out at least 90% of its profits as dividends. This results in an above-average payout, as the company currently sports a 5.8% dividend yield, for a higher income stream than even Verizon. Iron Mountain expects to grow its dividend from $2.20 per share in 2017 to $2.54 per share by 2020.

The company plans to fund that dividend by growing its revenue by 5% annually over the next three years, and its adjusted funds from operations by 9% annually through 2020, through a combination of organic growth and acquisitions.

Iron Mountain will continue its strong history of buyouts, which it expects will fuel growth, with an estimated $450 million to $600 million in acquisitions anticipated between 2018 and 2020. The company will then apply a proven template of cost-cutting and margin improvement.

With a 25-year history of revenue growth and strong dividends, this company is king of the mountain.

Jeremy Bowman (AT&T): Verizon isn't the only juicy dividend play in the telecom sector. Rival AT&T is also generous when it comes to sharing the wealth with investors, and is a better dividend pick than Verizon for a number of reasons. AT&T offers a higher yield, at 5.6%, and unlike Verizon, Ma Bell is a Dividend Aristocrat, as it's paid increasing dividends for the last 33 years. By comparison, Verizon paused its dividend hikes for much of the first decade of the century. AT&T's dividend hikes have been modest over the last several years; the payout has increased by just a penny each year, or a little more than 2%, as the company's profit growth, like Verizon's, has been modest.

AT&T has also pursued acquisitions more aggressively than Verizon, which could better position it as the telecom and media industries continue to consolidate. In 2015, AT&T closed on a $49 billion takeover of DIRECTV, the leader in satellite TV, and the company is now hoping to merge with Time Warner, though that deal will need to pass regulatory muster first. Since Time Warner and AT&T aren't direct competitors, many expect some version of the deal to eventually go through.

Elsewhere, AT&T is narrowing the gap with Verizon in network quality, and would have a much stronger bundle if even part of the Time Warner deal is approved. With a higher dividend yield and a strong record of dividend hikes, AT&T looks like the better choice for dividend investors.