By all evidence, 2017 should have been a trying year for Sprouts Farmers Market (NASDAQ:SFM). Still-lingering effects of grocery deflation, which have weighed heavily on much larger competitors like Kroger Co (NYSE:KR), had the potential to derail the produce-intensive natural and organic food chain. Shareholders have worried over a price battle looming between established grocery giants like Kroger and Wal-Mart (NYSE:WMT) as global German discount grocery specialists Aldi and Lidl assert themselves in the U.S. market. Finally, Amazon.com's (NASDAQ:AMZN) purchase of Sprouts competitor Whole Foods Market earlier this year has raised the prospect of deep price cuts, and those by a high margin grocer previously disinclined to compete on price.

And yet, despite great volatility in Sprout's stock chart due to the Whole Foods acquisition, SFM shares have gained nearly 17% to date. Through the first three quarters of 2017, Sprout's revenue has increased 15% to $3.5 billion versus the prior-year period, due to both a brisk slate of successful store openings and a comparable sales increase of 2.4% among established stores -- no small feat in the current cutthroat grocery pricing environment. 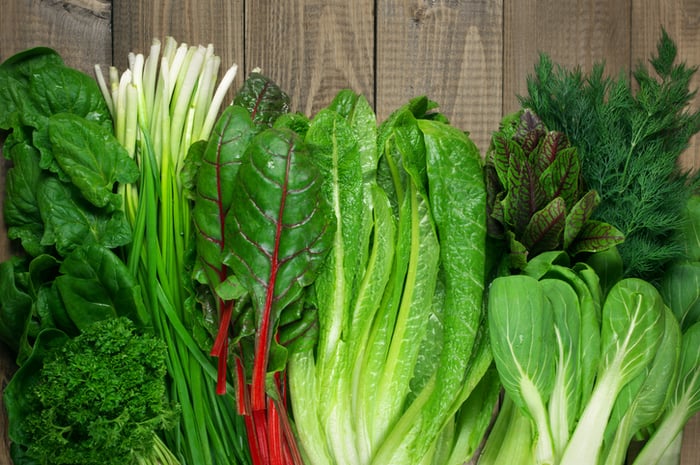 What's helping Sprouts differentiate itself from Whole Foods, which felt that it had no choice but be acquired as store expansion slowed and comps flat-lined? Or Kroger, for that matter, which is struggling to ignite revenue as its shares have lost a third of their value year to date?

Some of Sprout's success factors this year are external. Grocery deflation ebbed after the first quarter of the year. Additionally, Sprouts has little exposure in the Mid-Atlantic states. This is the epicenter of a new wave of grocery competition, where Lidl has established its U.S. beach head, Aldi is attempting to protect its turf, privately held Northeast chain Wegmans is expanding south, while also privately held Publix heads north. Here's the most recent map of Sprouts' store distribution: 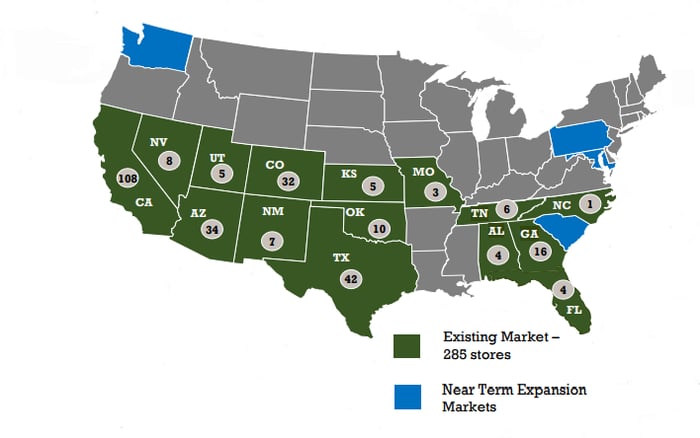 Three quarters of Sprouts' 285 locations are found in four U.S. states: California, Arizona, Colorado, and Texas. Sprouts is thus insulated from the east-coast grocery melee, which is set to escalate in 2018. As you can see, Sprouts expands in a contiguous fashion when possible. According to the investor presentation containing this map, 60% to 70% of new unit growth is derived from existing markets.

As for the initial rounds of price discounts Whole Foods has engaged in since merging into Amazon, any effect on Sprouts has been muted. In the company's earnings conference call earlier this month, COO Jim Nielsen noted that the Sprouts tends to index its pricing to be competitive against large conventional grocers within specific geographical regions. Thus its prices -- in general -- should already be competitive when placed in the context of Whole Foods' discounting efforts.

External pressures aside, Sprouts has also worked to control its destiny. The organization is gradually expanding higher-margin private-label sales, which now make up approximately 12% of total revenue. Taking a cue from Whole Foods, the company has launched "enhanced deli" operations this year, its own term for lucrative prepared foods sold at the deli counter. As of Sprout's latest quarterly report, enhanced delis are now found in 130 stores, just shy of one-half of total store count.

On the productivity front, the grocer is investing in technology to improve labor expense and cut inventory costs. Along with recently implemented labor management software, Sprouts is rolling out a software tool through its stores to better manage perishables inventory, an initiative that should positively affect the P&L in coming quarters.

Regardless of pressure -- and opportunity -- from Amazon, investors should focus on results

As we head toward 2018, one minor but intriguing development in Sprouts' business has grabbed the notice of many an observer. It was widely assumed that after purchasing Whole Foods, Amazon would shelve its Prime Now partnership with Sprouts, which enables two-hour home grocery deliveries to Sprouts' customers in eight cities. But management has recently indicated that after discussions with Amazon, the service is still a go for now, and Sprouts expects to expand the service into additional cities next year.

More pertinently, if Amazon were to acquire Sprouts, it could control the expansion of both chains, turning their development pipelines into complementary, rather than competitive, coverage of the U.S. retail grocery map.

Investors should probably treat the engaging possibility of an Amazon merger with a patience and skepticism at least equal to the caution they exercise regarding the risks we discussed earlier.

In the meantime, earnings results present an objective reality to evaluate. With revenue growth in the high teens, higher than average profit margins, and ample cash flow, Sprouts' current business offers reasons enough for shareholders to stay committed. The company now trades at a forward PE ratio of 21, which is nearly double what Kroger sells for at 11 times earnings. But Sprouts offers growth to Kroger's wrenching fight against stagnation. And its top line is expanding faster than almost any conventional grocer you can name, so even at a premium, shares still represent an attractive investment in the grocery industry.