Thus far, the virtual reality (VR) headset market has gotten off to a relatively slow start. Adoption has been held back by the usual suspects: relatively high hardware costs, a lack of must-have VR content, and slow acclimation to the idea of wearing an immersive headset. Plus, graphics performance needs to continue improving.

The good news is that the market just hit a major milestone, shipping over 1 million VR headset units in the third quarter for the first time, according to market researcher Canalys. 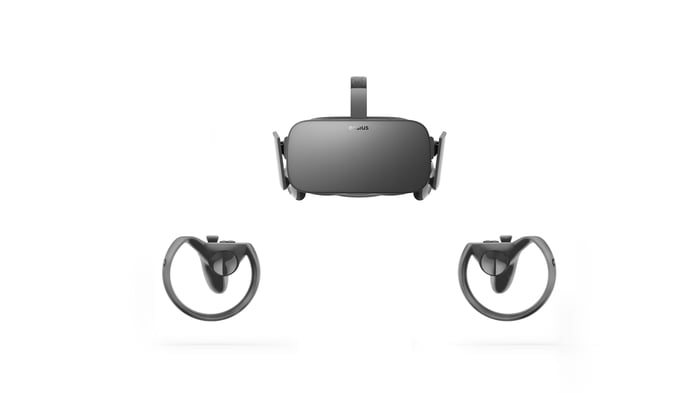 Sony (NYSE:SONY), Facebook (NASDAQ:FB), and HTC are the market leaders right now, representing 86% of all unit volumes in the third quarter. Sony is able to leverage its massive PlayStation 4 installed base and strong position in the gaming market, while Facebook continues to push forward with its Oculus subsidiary and new Oculus Go stand-alone headset, and HTC's Vive continues to hold its own.

Sony cut the price of its PlayStation VR bundles in August. Facebook has cut pricing on its Oculus Rift and Touch twice this year already, in March and then again over the summer for a promotion. This last price reduction was subsequently made permanent; Rift and Touch now cost $399 together, or about half what it would have cost to purchase Rift and Touch at the beginning of 2017. The HTC Vive similarly saw a $200 price reduction in August.

Canalys notes that VR adoption has been strongest in Asia, particularly in Japan due to the prominent gaming and entertainment culture. That's good news for the Japanese tech giant, which Canalys believes is positioned well to benefit from VR adoption with its PlayStation 4 gaming console. Sony enjoys a dominating 80% share of the Japanese VR headset market.

The momentum is expected to continue throughout the 2017 holiday shopping season and into 2018, particularly as Microsoft launched its Windows Mixed Reality platform just last month. The software giant's vision is slightly different though, and Mixed Reality will include both VR and augmented reality (AR) experiences. Mixed Reality is starting with VR but will subsequently venture into AR. Most other companies are pursuing VR and AR as different platforms.

The milestone is encouraging, as companies continue to pursue the right balance of costs, content, performance, and consumer behavior.