Considering that the real estate market is doing rather well and homebuilders are cranking out spectacular results lately, CalAtlantic's (NYSE:CAA) 22% decline in earnings per share stands out among the crowd, and not in a good way. Delays from the hurricanes that hit the U.S. last quarter and an issue with a lumber supplier drastically impacted the company's ability to close on homes.

Not that investors are too worried. After all, the company did receive a buyout offer from Lennar (NYSE:LEN) this past quarter. Let's take a look at what happened with CalAtlantic's most recent results and why it ultimately may not be a big deal. 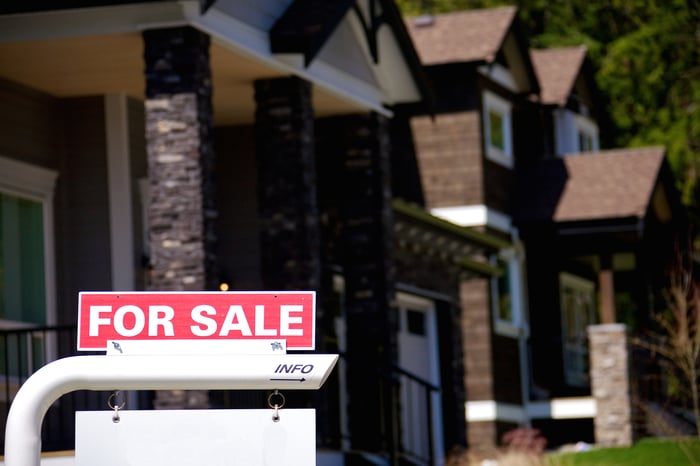 Looking at the raw numbers for this quarter, it didn't look good. New home deliveries were down 8%, net new orders were down 3%, the average selling price for a home declined 1%, revenue slipped 9%, and margins contracted. This result is in stark contrast to many of CalAtlantic's peers that continue to knock the cover off the ball in recent quarters. If there was something worth hanging its hat on, the dollar value of net new orders was up 6%, which means the average selling price of future homes should rise. Also, the company was able to keep earnings per share flat thanks to buying back shares over the past year.

The are two reasons management highlighted as to why it underperformed this past quarter. The first were hurricanes Harvey and Irma, which impacted results in Texas and Florida. These are two of CalAtlantic's four largest markets, and the company has a strong presence in both the Tampa and Houston area, so the hurricanes were destined to have some impact.

The other thing management mentioned was a problem with is lumber supplier, Weyerhauser (NYSE:WY). The lumber manufacturer has received several complaints from CalAtlantic and other homebuilders about its I-joists -- a piece of manufactured lumber that looks a lot like a steel I-beam. These joists are coated with a formaldehyde resin to improve fire resistance, but a recent batch of treated joists had odor problems. CalAtlantic says operations in Colorado, Minnesota, and Philadelphia were delayed or stopped because of the odor issue and hasn't yet been resolved.

Now, here's the counterpoint to those arguments. CalAtlantic isn't the only company with a significant presence in the Texas and Florida markets. These are two of the largest homebuilder markets in the U.S. and just about every homebuilder worth its salt has operations there. Yet, looking at other companies' recent results, not too many of them noted significant impacts from the hurricanes. Also, while the I-joist odor problem probably did affect operations, it doesn't explain how its western region also saw significant drops in closings. Perhaps the company is trying to mask some other poor results with some seemingly reasonable excuses.

Even though the company had clear issues in the quarter, CEO Larry Nicholson tried to gloss over them in a press release and focused on the upcoming merger.

We are pleased to report third-quarter earnings which, after excluding delivery delays from the recent hurricanes and the impact of the Weyerhauser I-joint issue, reflect operating progress and a platform that is well-positioned for 2018. As announced last week, we are merging our company with Lennar Corporation. We have great confidence that this merger will create a larger and even stronger company. Both management teams have already begun planning, with the initial focus on construction cost savings, systems conversions and financial services opportunities. As we begin integration planning, the cooperative spirit I see has been great.

The most recent quarter's results and issues with suppliers didn't seem to deter Lennar from acquiring CalAtlantic, so chances are that Lennar knew about these things and decided to go forward with the merger anyway. Lennar is probably much more interested in the company's development portfolio. Combined, the two will have a top three market position in 24 of the 30 largest markets across the U.S. and increase its average selling price. Lennar expects the deal to close in the first calendar quarter of 2018.

If investors truly are concerned that CalAtlantic's recent troubles aren't just hurricane and smelly lumber, then the offer of $48.26 in cash per share instead of shares in Lennar could be an attractive alternative.