Please ensure Javascript is enabled for purposes of website accessibility
Log In Help Join The Motley Fool
Free Article Join Over 1 Million Premium Members And Get More In-Depth Stock Guidance and Research
By Keith Speights - Dec 1, 2017 at 8:08AM

My prediction: It won't exist. Bad news? Not at all.

Prediction is very difficult, especially if it's about the future.

I've always liked that quote from Nobel prize-winning physicist Niels Bohr. And it's 100% correct, of course. But attempting to predict the future can nonetheless be fun to do sometimes.

With a clinical-stage biotech like Novavax, Inc. (NVAX -0.34%), predicting is especially tough. The future could turn out to be terrific or it could be terrible. Where will Novavax be in five years? Here's my prediction about what's in store for the company. 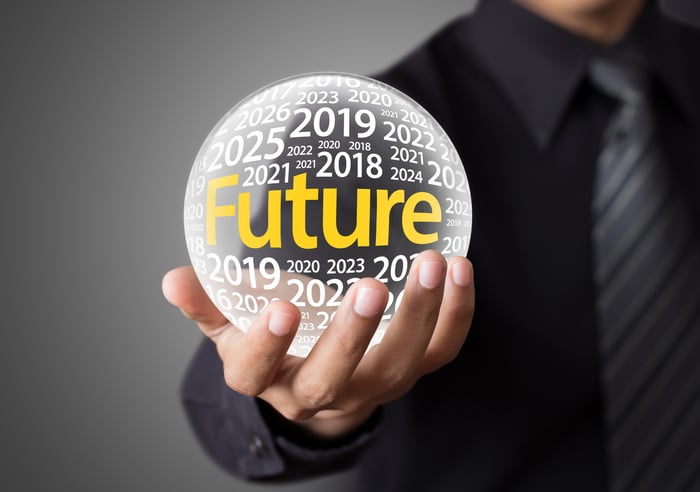 Let's first look at Novavax's lead product, its respiratory syncytial virus fusion protein nanoparticle vaccine. As entertaining as it is to try to say that name, I'll just refer to it as the RSV F vaccine from this point forward. If you're a Negative Nellie, you might think that the prospects for this vaccine are poor. After all, Novavax lost over four-fifths of its market cap overnight last year when the RSV F vaccine flopped in a late-stage clinical study.

But by 2022, I think Novavax will have a modest winner on its hands. The company has another late-stage study underway for the RSV F vaccine, this time focusing on maternal immunization of infants. Novavax expects to provide an interim data analysis from the study next year. The study is scheduled to wrap up in 2020.

My hunch is that Novavax will succeed this time around. Phase 2 results looked great, with significant antibody increases. Maternal immunization also doesn't have some of the complicating factors associated with testing vaccines in adults, particularly varying RSV attack rates (a measurement of the spread of the virus).

The market potential for a successful RSV F vaccine for infants is significant. RSV is the most common cause of lower respiratory tract infections among young children. It's the top cause of hospital stays for children under the age of one in the U.S. And it's the second-highest cause of death for infants across the world.

If my view of the future is on target, Novavax would be in position to win approval for the RSV F vaccine in 2021. The product should be picking up nice momentum five years from now.

Then there's the biotech's nanoparticle influenza vaccine, NanoFlu. What does the future hold for this vaccine? Again, I predict success. Doing so is really a step out on a limb, though, since NanoFlu only recently began its first clinical study.

My rationale for expecting the flu vaccine to deliver the goods stems from overwhelmingly positive preclinical results. NanoFlu induced hemagglutination-inhibition (HAI) and microneutralizing (MN) antibodies at much higher rates than Sanofi's current vaccines, Fluzone and Fluzone HD. What's more, those responses were seen against a broad range of influenza subtypes, which gives reason for optimism that NanoFlu might be able to address the problem of annual strain mismatch seen with flu vaccines on the market today.

Granted, those preclinical results were in ferrets instead of humans. However, ferrets are ideal for testing flu vaccines, because the animals respond to flu infections and transmit the virus in similar ways as humans do. Novavax expects to announce results from its phase 1/2 clinical study of NanoFlu in older adults by the end of this year. If those results are positive, the company hopes to advance to a pivotal study by late 2018.

So where will NanoFlu be five years from now? I predict that it will have been on the market for a couple of years and making a lot of money. If Novavax stays on track, the company should be able to submit for regulatory approval in 2019. More than $3 billion annually is spent on flu vaccines in the major markets of the U.S., the U.K., France, Germany, Italy, Japan, and Spain. NanoFlu could capture a significant chunk of that market if all goes well.

If my predictions are even close to being accurate, Novavax will be in really great shape in 2022. The company's market cap currently stands a little north of $400 million. With successful vaccines for RSV and influenza, Novavax should be worth a lot more five years from now.

My view, though, is that successful clinical studies for NanoFlu and the RSV F vaccine would probably attract the attention of larger drugmakers wanting to bolster their product lineups. Assuming my predictions for Novavax's pipeline candidates come to pass, I don't think Novavax will exist as an independent entity in 2022 and will instead have been gobbled up by another company.

Any clinical setbacks could demolish the scenarios that I've laid out for Novavax's potential future, however. Remember the earlier quote from Niels Bohr. Any predictions have to be taken with a grain of salt. In the case of predicting what might happen for a clinical-stage biotech like Novavax, you'll need a full shaker of salt.