Shares of Time Inc. (NYSE:TIME) and Meredith Corporation (NYSE:MDP) jumped last month after Time agreed to sell itself to Meredith for $18.50 a share. Though the deal was not announced until Nov. 26, the stocks first jumped on Nov. 16 when Meredith made an offer between $17 and $20 a share. According to data from S&P Global Market Intelligence, Time finished the month up 60.3%, while Meredith gained 28.6%. 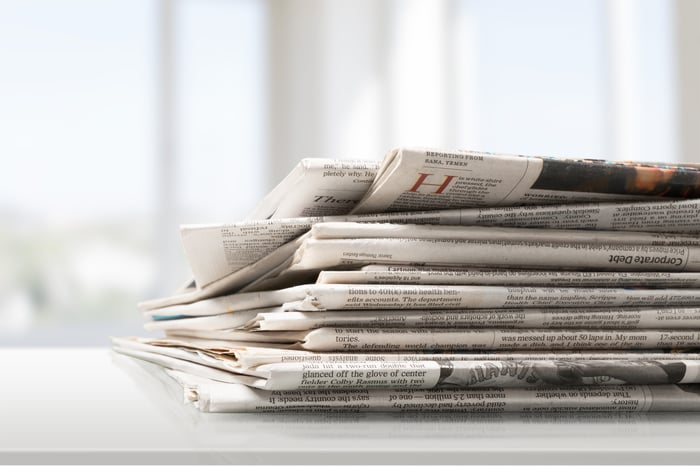 As you can see in the chart below, the stocks jumped both on the day the offer was made, and when the two sides came to an agreement: 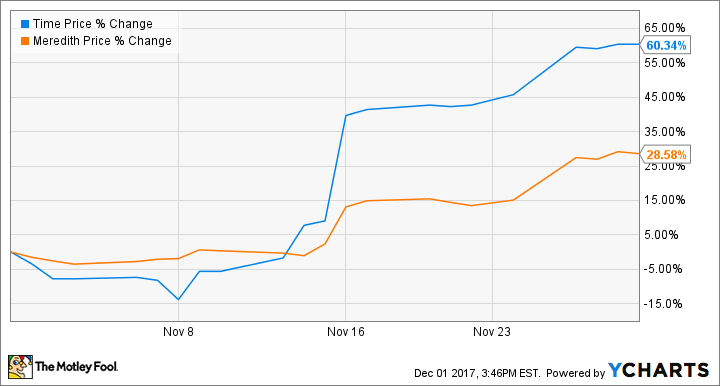 The deal will combine Time Inc.'s magazines -- including its eponymous newsweekly, Fortune, Money, People, Sports Illustrated, and others -- with Meredith, a media conglomerate that owns several television stations, websites, and a publishing segment that includes Better Homes & Gardens, Parents, and Family Circle, among others.

While the target company often jumps in a deal like this, it was odd to see Meredith stock gain so much. Meredith had been looking to acquire Time since 2013, and its CEO Stephen Lacey said the combination would create a "premier media company serving nearly 200 million Americans." The merger will give Meredith greater scale and efficiency and accelerate its digital position.

The deal also courted controversy as the billionaire Koch brothers invested $650 million of the $2.8 billion purchase price, though they have said they wouldn't take a seat on the board.

There's no question that Time has shrunk considerably since its pre-internet heyday. The stock was spun off of Time Warner in 2014, and since then had lost about 50% of its value before the Meredith bid came along, as subscribership continued to decline. Meredith has fared better with the help of its television and diversified holdings, though its gains in recent years had been modest before last month's jump.

While investors are clearly happy with the deal, I wouldn't expect any fireworks from the new media company.