Please ensure Javascript is enabled for purposes of website accessibility
Log In Help Join The Motley Fool
Free Article Join Over 1 Million Premium Members And Get More In-Depth Stock Guidance and Research
By Jim Crumly - Dec 2, 2017 at 10:36AM

Is the company's rich yield an opportunity for investors, or a warning of trouble ahead?

One of the attractions of investing in British drugmaker GlaxoSmithKline plc (GSK -0.80%) is its generous dividend yield, which lately has hovered at just a bit less than 6%. A yield that's so far out of whack with peers in the industry is an indication that the market is discounting trouble ahead. How likely is a dividend cut, and is the recent drop in the stock price a warning or a buying opportunity?

GlaxoSmithKline's shares have slumped since early summer, and the biggest concern has been the safety of the dividend. At a July 26 investor event, Glaxo CEO Emma Walmsley and her team stirred up new worries about the dividend when they announced a change in policy coming after 2018. The company is committed to maintaining the current dividend through 2018, but after that, Glaxo will return to its pre-2015 practice of declaring the payout on a quarter-by-quarter basis rather than committing to it in advance. 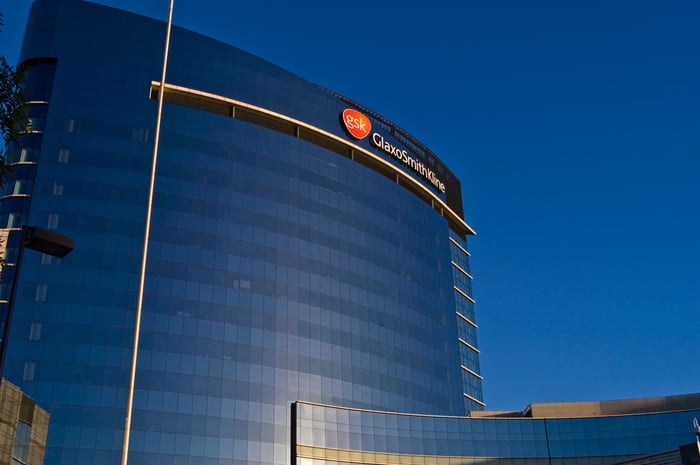 After 2018, Glaxo will have a goal to have 1.25 to 1.5 times coverage of dividend payments with free cash flow. That's totally reasonable, and is a financial conservatism that dividend investors love to see. The problem is, despite improving cash flow in recent quarters, the company isn't anywhere near that now.

When questioned by analysts, the company admitted that it will probably take several years before free cash flow amounts to 125% to 150% of the current dividend, leaving open the question of whether there will be a dividend cut after 2018. When Glaxo executives refused to rule that out and stated that growth investments will be prioritized over the dividend, the market immediately started assuming a cut was in the offing, bidding down the stock price and therefore driving up the yield. 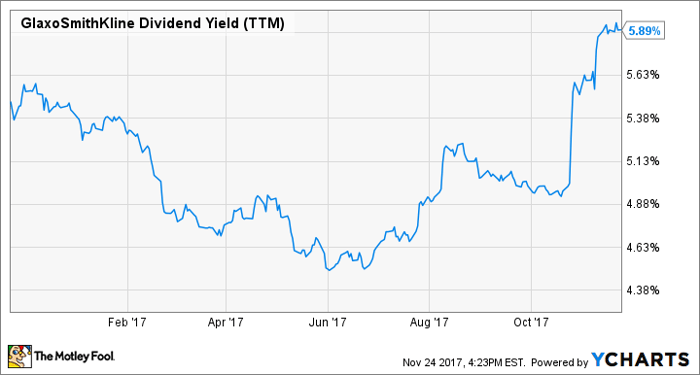 In 2016, free cash flow amounted to 80% of the dividend payout. Free cash flow is particularly lumpy because of the timing of various payments and inventory builds, but so far in 2017, it's up 29% from last year, and the guidance is that Q4 cash flow will be strong. If the 29% growth holds up for the whole year, 2017 free cash flow would edge up just over 100% of the cash need for the dividend. Assuming 2018 also is a growth year for cash, Glaxo could afford to maintain the dividend without increasing debt and may actually get close to the coverage goal. Maintenance of the current dividend during a transition to the long-term goal is a strong possibility.

If free cash flow is above 100% dividend but below the long-term goal of 125% to 150%, will Glaxo cut the dividend? I don't think so. The company hopes to grow into its goal over a period of years, but it recognizes how important the dividend is to its shareholders. If management had any doubt about that, it should have been erased with the 14% decline in the share price since the July event, when the issue moved to front and center.

Fast-forward to about a year from now. All things being equal, if Glaxo indicates that it will maintain the current dividend into 2019 and beyond, the shares are likely to rebound the 15% they have fallen since the day before the July investor event. That would be a nice gain for patient investors.

But there's one problem with this assumption.

In October, Pfizer announced that it was looking into options to spin off or sell its $3.4 billion consumer products business, which includes two of the top 10 global brands, Advil and Centrum. GlaxoSmithKline would be the obvious buyer in such a big deal, having traded assets for the consumer business of Novartis in 2015 to create a joint venture. In the third-quarter conference call, Walmsley, who had led the consumer business before taking the top job earlier this year, confirmed that the company is interested.

Analysts immediately expressed concern that any deal to pick up Pfizer's consumer business would jeopardize the dividend. A deal seems very possible, with Walmsley saying the company wanted to build up its consumer business and having declared that investments for long-term business growth will be the highest priority for capital allocation.

Even if a deal with Pfizer could be structured in such a way keep the balance sheet intact, it is likely to have some cash requirement. And there is an additional complication, in that part of the deal with Novartis involved granting that company a "put option" to sell its 37.5% stake in the consumer joint venture to GlaxoSmithKline at any time, starting on the third anniversary of that deal, coming up next year. Should Novartis decide to exercise the option, the buyout could be a huge cash requirement for Glaxo.

The essential dilemma for GlaxoSmithKline investors is that, as of today, the company can't afford the current dividend. And while it probably has the ability to grow into affording it, there are other competing needs for cash. Even if precious capital isn't spent on bolstering the consumer business, the company wants to be ready for an acquisition opportunity to strengthen its drug pipeline, should one appear.

GlaxoSmithKline may be able to navigate these waters without lowering the dividend, but it would probably come at the price of passing up opportunities that would ratchet up growth. With the lack of flexibility and uncertainties that come with Glaxo's shortage of cash, conservative investors would be better off ignoring the high yield and putting new money into dividend payers with stronger finances.