Please ensure Javascript is enabled for purposes of website accessibility
Log In Help Join The Motley Fool
Free Article Join Over 1 Million Premium Members And Get More In-Depth Stock Guidance and Research
By Brian Stoffel - Dec 3, 2017 at 8:01AM

It doesn't matter if many merchants fail -- the biggest winners will more than correct for it.

Two months ago, Citron Research's Andrew Left made waves when he said Shopify's (SHOP 8.34%) 500,000 merchants were the result of false promises and dirty recruitment tactics. He backed his claim by showing videos of Shopify affiliates pumping the chance for easy money using the company's e-commerce platform.

Left's warning is worth heeding: I'm not sure how many of those 500,000 merchants I would consider "legitimate". As a shareholder, I agreed some tightening of standards needed to take place. And yet, I bought shares of Shopify stock after the report, bringing it to 4.4% of my personal holdings today.

That's because there's one crucial phenomenon that Left and fellow short-sellers are overlooking: positive black swans. 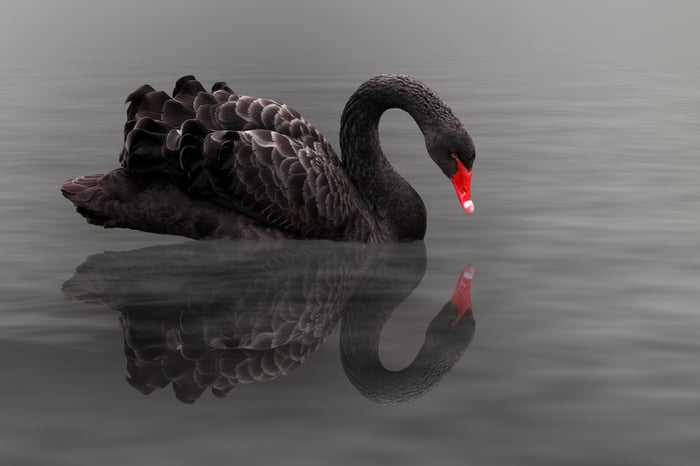 The anatomy of a black swan

The expression -- "black swan" -- appeared on investors' radars in 2007 with Nassim Taleb's best-seller, Black Swan: The Impact of the Highly Improbable. Taleb says we have a terrible track record of understanding and preparing for black swan events, all of which share three key traits:

The terrorist attacks of 9/11, the Fukishima nuclear disaster in Japan, and the stock market crash of Oct. 19, 1987 would all qualify as black swan events.

But here's something we often miss: Black Swan events don't have to be negative -- at least not for all parties involved. Consider the rise of the Internet:

Of course, I'm being a bit hyperbolic. And some may rightly question just how "positive" this event was, but I think you get the point: It works both ways.

Which brings us back to Shopify. The company provides a platform for merchants to open up shop online, establish a presence via social media, and assist with the logistics of e-commerce.

There are five tiers of Shopify monthly subscriptions:

With an entry-point of just $9 per month, it's easy to see how anyone with interest in a side project could sign on with Shopify and join its 500,000 merchants. Of course, just because you're a Shopify merchant doesn't make you a business that's destined to succeed.

In fact, you'll most likely fail. So will almost everyone else trying to do the same thing.

Pretend that you work for Shopify, and you can view the stream of merchants signing on to use Shopify Lite or Basic. Do you think you'll be able to predict which ones will be successful and which will fail? Would you be willing to stake your future on it?

My guess is that after a little practice, you'd see that it's almost impossible to see what the next big e-commerce hit will be ... though you'll likely convince yourself you saw the few winners coming all along. I'd also wager that the effect of the success from just a handful of merchants on Shopify would surprise you.

Here's how I like to think about that dynamic:

Shopify is in the business of catching positive black swans.

The more it catches, the more successful it is. That being the case, I don't care nearly as much about whether or not the 500,000 figure is accurate -- or what the churn rate is -- on an absolute basis. It's good to see the merchant count growing since it means Shopify is widening its net.

In effect, the distribution of merchants by subscription might look like this (no one outside the company actually has any idea to the specifics): 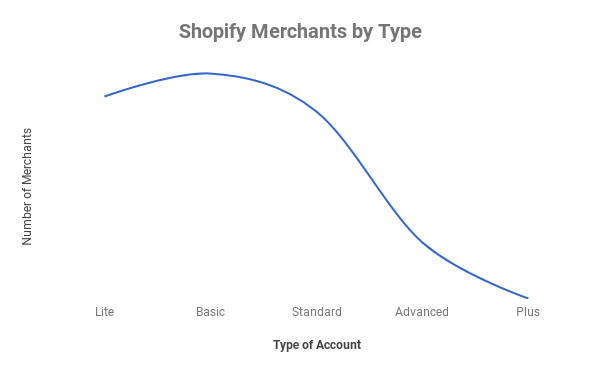 At the same time, however, if we break down the amount of revenue generated by each subscription type, the distribution could very well look like this. 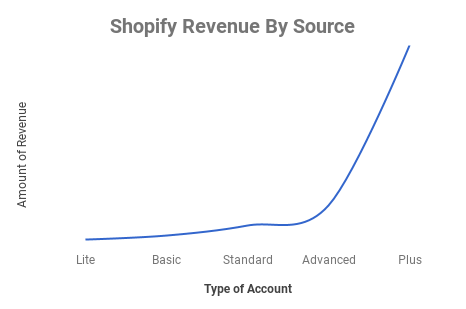 That's what having a business that "catches" black swans looks like.

Unfortunately, management doesn't provide much granularity when it comes to enrollment figures in any of these subscription types ... except for Shopify Plus, aka the black swans.

Even then, the insight isn't great, but here's what we know:

The amount of monthly recurring revenue from Shopify Plus accounts has also been booming.

And remember, this is only subscription revenue. It doesn't include the success-based merchant solutions revenue that these customers bring in either, but it's the best data we have to work with.

In the end, this is the big point that Andrew Left and others are missing: They shouldn't care about the absolute number of merchants, or allow a few unscrupulous affiliates to sour their outlook on the company.

Once in the Shopify ecosystem, anecdotal evidence points to very high switching costs. That's key, because as Shopify's net widens to more and more merchants, it won't matter how many of these companies fail. The net will catch more than its fair share of black swans, and they'll likely be with Shopify for a long time. And that's the most important thing to keep in mind if you're a long-term investor.

Should You Buy Shopify Stock After the Split?