Though YouTube finds itself embroiled in numerous controversies surrounding children, Facebook (META 1.70%) has apparently decided that now would be a good time to roll out a brand-new product geared toward kids: a new Messenger Kids app. It's a version of the social network's popular messaging service that includes numerous parental controls and safeguards that hopes to connect kids to friends and family. Facebook says the app was co-developed with parents, kids, and "expert advisors" who specialize in child development, online safety, and children's media.

A parent sets up the child's Messenger Kids account and has parental controls available through their Facebook account. Parents can see who is approved to communicate with their children and when those contacts are online. Messenger Kids will expectedly feature the same types of emojis, stickers, and photo/video filters that have proliferated all messaging services, with the exception that the library of content is being specifically selected as kid-appropriate. 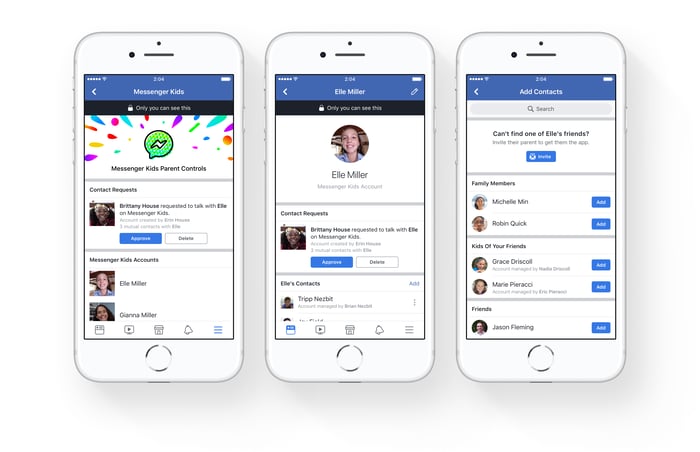 How young is too young?

Officially, Facebook's age policy requires users be at least 13 years old, although this age limit has always been arbitrary and simple to bypass. Messenger Kids represents Facebook's most meaningful (and official) effort to date to get users under 13 onto its growing portfolio of services. When a parent creates a Messenger Kids account for their child, it does not create a stand-alone Facebook account. Messenger Kids accounts are essentially linked to the parent's account and do not require a phone number.

Messenger Kids complies with the Children's Online Privacy and Protection Act (COPPA), the federal law passed nearly 20 years ago that imposes strict requirements on online services that target children under 13, particularly around personal data and privacy. There will not be any ads or in-app purchases in Messenger Kids, and Facebook says the child's information is not used for ad targeting.

The obvious goal here is to create a pipeline of younger users that will eventually create Facebook accounts once they reach age 13, after Facebook familiarizes those users with its services. (Recall that investors sometimes fear that teens are ditching Facebook in favor of other platforms.)

One of the aforementioned YouTube controversies revolves around content creators getting inappropriate content past the filtering algorithms in the YouTube Kids app. That is but one of many instances lately within the broader social media sector of algorithms failing spectacularly (including facilitating Russian meddling in the 2016 election and inappropriate ad targeting), and even as Facebook is similarly heavily reliant on the algorithms that power its core products like News Feed, these concerns should not extend to Messenger Kids.

Unlike the other social media platforms that feature user-generated content, Messenger Kids is a messaging service that isn't being populated with the same type of content. The only type of content that Facebook is providing are the GIFs, sticker packs, and such, which is much easier to curate appropriately since it's a fairly limited catalog.

It's probably not a coincidence that Facebook also made a separate official blog post discussing online safety and kids. Facebook not only has an opportunity, but an obligation to help parents navigate the increasingly digital world with their kids, according to Facebook's Global Head of Safety Antigone Davis. Children are also increasingly spending time on screens.

Facebook says approximately 93% of U.S. children 6 to 12 years old have access to a mobile device, and two-thirds have their own device, according to research firm Dubit. Furthermore, many of these young users are already using messaging apps and social media despite being under 13. Put another way, Messenger Kids is also looking to compete with traditional smartphones and text messaging services, which don't necessarily have age requirements or granular parental controls.

Messenger Kids is rolling out on the iOS App Store today, but will make its way to Android in "coming months."