Once Tesla (TSLA 4.67%) ramps up production of its Model 3, the less costly vehicle will become the biggest contributor to the electric-car maker's business. But, for now, the Model S continues to hold this important position -- more than five years after it was launched. The award-winning vehicle has served as Tesla's primary growth engine for years, propelling annual revenue from several hundred million dollars to billions in just a few years.

But Tesla's Model S deliveries this year suggest upside for the pricey electric sedan may be limited from here. This puts pressure Tesla's next growth catalysts.

Here's a look at how Model S sales growth has slowed, and why the success of the electric-car maker's newer vehicles is so vital. And 2017 isn't looking much better for Model S. Indeed, trailing 12-month deliveries as of the end of Tesla's third quarter are down 6% year over year. However, based on recent sales trends and Tesla's guidance for record total deliveries when including Model X, there's a good chance Tesla could squeak by with a low single-digit increase in 2017 Model S deliveries versus 2016.

Whether Tesla posts another year of Model S sales growth or not, it's fair to say that Model S sales are at least close to peaking. After all, the highest Model S sales for any trailing 12-month period was achieved over a year ago -- in the third quarter of 2016.

Of course, CEO Elon Musk has always indicated that total vehicle sales would keep rising rapidly over time, but only with the help of new electric vehicles. And this is exactly what is happening. Just as Model S sales growth is slowing, trailing 12-month Model X sales have surged to just under 43,000 in Tesla's most recent quarter -- up hugely from trailing 12-month sales of about 16,000 in the year-ago quarter. 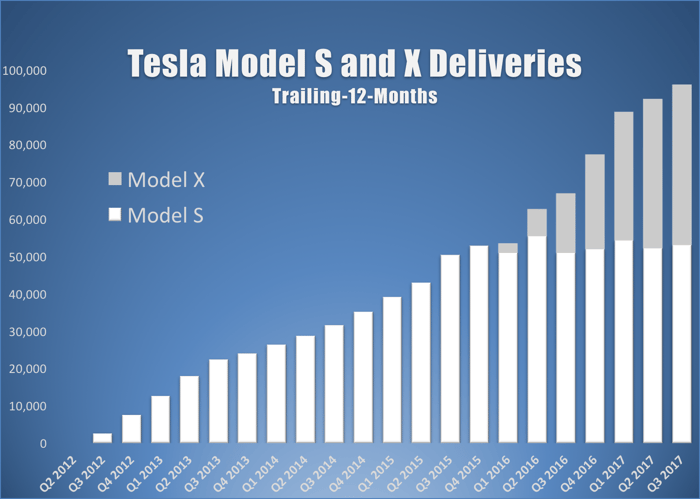 Then, of course, there's Tesla's Model 3. After a slow start that put the Model 3's production ramp about one quarter behind, the electric-car maker expects weekly production of the lower-cost vehicle to hit an impressive 5,000 units a week by the end of the first quarter of 2018.

But even with the Model 3's slow start in 2017, Tesla still expects growth in total vehicle sales. Its guidance for about 100,000 Model S and X deliveries in 2017, for instance, represents 30% year-over-year growth compared to the deliveries of the two vehicles last year. Further, Tesla said in its most recent shareholder letter that net orders for the two vehicles combined hit a record high in Q3. So, demand is looking up as well.